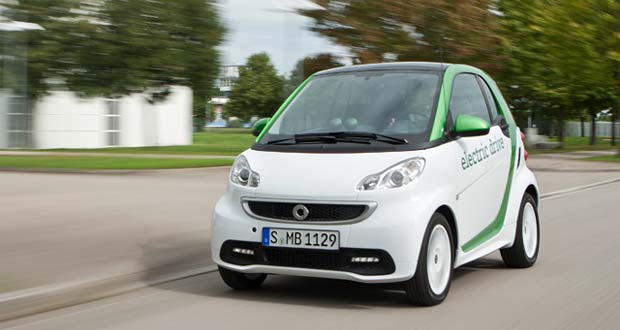 Daimler has unveiled a heavily revised version of the smart fortwo ED ahead of car’s planned debut at the 2011 Frankfurt Motor Show in September.

With total production amounting to a five-figure number, from the spring of 2012 the further developed smart fortwo electric drive will start winning wide-ranging buyers in more than 30 countries for an innovative and forward-looking drive concept.

With torque of 130 Newton metres it accelerates powerfully and immediately from 0 to 60 km/h (0 to 37 mph) in 5 seconds and thanks to better acceleration in the higher speed range it can sprint from 0 to 100 km/h (0 to 62 mph) in less than 13 seconds as it has much more tractive power than its predecessor. This makes for speedy driving and overtaking. The battery-electric two-seater smart fortwo now also has a higher top speed of more than 120 km/h (75 mph), putting it on a par with the combustion-engined smart.

A battery supplied by Deutsche ACCUmotive, a joint venture between Daimler and German alternative energy specialist Evonik, is fitted in the new smart fortwo electric drive for the first time. With capacity of 17.6 kWh the lithium-ion battery from the joint venture with Evonik Industries provides for well over 140 kilometers (87 miles) of pollutant-free driving fun. In addition to the higher battery capacity clear improvements have been made to the efficiency of the drive system, resulting in a greater range. When completely empty it takes a maximum of eight hours to fully charge the battery at a household socket or charging station on the electricity systems of most countries i.e. overnight.

For the greater freedom of quick charging it is possible to optionally equip the vehicle with a quick-charging function. The 22 kW on-board charger enables a completely empty battery to be fully charged in less than an hour. A power cable is needed for this which is used to connect the vehicle to a public quick-charging station or a wallbox at home or work.

A comparison of the two smart fortwo electric drive generations

With a larger radiator grille featuring the electric drive logo, stylish LED daytime driving lights below the headlamps, wider door sills and several modifications to the rear the new model is much more dynamic than its predecessor.

The new smart fortwo electric drive comes in all smart colors and color combinations that are also available for the diesel and petrol models.

As to be expected the new smart fortwo electric drive features extensive equipment. A highlight is the fully automatic air conditioning with pollen filter and pre-air conditioning. As with the second generation the vehicle can be pre-cooled or pre-heated as required for a programmed departure time when it is connected to the power network. A new feature is the possibility to start the pre-air conditioning via the internet or a smartphone at any time.

The standard equipment furthermore includes electric windows and electrically adjustable door mirrors, a leather steering wheel, leather gear knob, the entry line radio, power steering, 9-spoke alloy wheels and a luggage compartment cover. As with the predecessor model in addition to the standard solid roof a glass roof and a cabrio version are available. The trip computer – also a standard feature in the electric smart – shows journey information including the remaining range. And like the predecessor model the two round instruments show the charge status of the battery and the energy used and recuperated. In addition, the smart fortwo electric drive can be equipped with a navigation system and a 3-spoke leather steering wheel.

The smart fortwo electric drive can be connected to the internet at home via a standard powerline adapter (Homeplug AV) for SmartCharging. After entering the planned departure time in the vehicle or the web portal the vehicle will be fully charged in a battery-saving and economical way, and pre-air conditioned if required so that it is ready to start. The pre-air conditioning can also be conveniently activated online shortly before setting off.

Smart also plans to add a plug-in electric bicycle to its lineup. The Smart Ebike will be unveiled in near-production form at the Frankfurt Show.

It uses a 250-watt brushless electric hub motor, produced by BionX and mounted within the rear 26-inch wheel, to supplement the pedal power. A handlebar-mounted control unit offers four different levels of electric assistance. Energy is stored in a 400-watt-hour lithium-ion battery mounted within the bike’s frame.[wzslider height=”400″ lightbox=”true”]