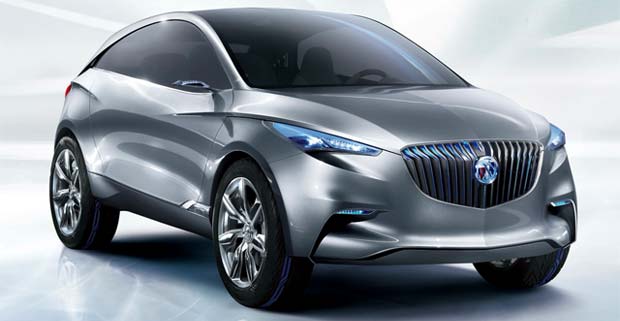 The highlight of GM’s stand at the 2011 Shanghai Auto Show will be undoubtedly the Buick Envision SUV Concept that previews design features and technologies that will be used by future Buick models.

The Buick Envision SUV is equipped with GM’s plug-in hybrid system with a direct injection turbocharged 2.0-liter SIDI  engine mated to two electric motors and an 8-speed transmission that can be operated in either automatic or manual modes.

A high-performance lithium battery and a solar energy roof with optical equipment serve as an alternative energy source independent from the engine.

The Envision’s compact, lightweight chassis is composed of carbon fiber, magnesium and aluminum. Mounted on an MRC electromagnetic suspension with the energy-recycle function, it offers one of the fastest magnetic ride control systems in the world. Damping can be actively regulated according to road conditions to optimize handling. The AWD system lets power be distributed to each 22-inch wheel independently.

The Envision introduces a number of people-oriented concepts and technology for convenience and comfort.

·        The next-generation Bluetooth DUN Intelligent Internet system allows users to connect to the Web with their cell phones. Using cloud servers, the system enables virtual community interaction and the sharing of information with other vehicles. Information can be displayed on the OLED touch-screen interface on the Flex-touch central console or on the windshield.

·        Traditional rearview mirrors have been replaced by three micro-cameras to catch and relay images of the road to the dashboard. When the car is moving, speed, fuel consumption and navigation details are projected onto the windshield in 3-D so that the driver does not have to take his or her eyes off the road. The OLED touch screen is aided by an auxiliary speech function. Users can easily toggle between real-time information, the in-car navigation system and the entertainment system. The system can be adjusted to the height of the driver.

·        With micro-cameras and transmitting sensors, the Envision addresses blind spots. The area blocked by the A-pillar can be projected above the A-pillar, enhancing safety while lowering drag coefficient.[wzslider height=”400″ lightbox=”true”]