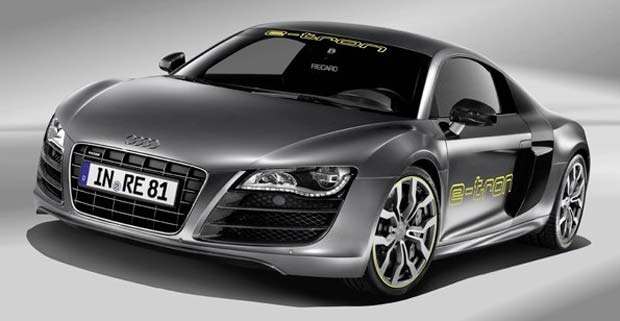 Audi has released today the full 2012 Audi R8 e-tron specification together with a new video of its electric super car.

The Audi R8 e-tron is a high-powered sports car with a purely electric drive. Its four engines provide a total power of 230 kW (313 hp) for splendid driving performance. They can be individually actuated – for an entirely new developmental stage of the permanent four-wheel drive.

The four asynchronous motors – two each on the front and rear axles – make the Audi R8 e-tron a quattro. Power is transmitted to the wheels via the single-staged transmission and short input shafts. With a peak output of 230 kW (313 hp) and with up to 4500 Nm (3319.03 lb-ft) torque at the wheels available from a standstill, the R8 e-tron delivers breathtaking driving performance. It catapults from 0 to 100 km/h (62.14 mph) in just 4.8 seconds.

The technology demonstrator enveloped by the R8 belongs to the top league of electric sports cars. Its package does justice to the specific qualities of the new technology in all details. The large, fluid-cooled lithium-ion battery and the power electronics, for example, lie directly behind the passenger compartment. The result is an optimal center of gravity and a load distribution of 42:58 between the front and rear axles – just like the series production R8 with its 5.2 liter FSI.

The R8 e-tron provides a glimpse into Audi’s philosophy of electric mobility. Extending far beyond the battery technology and the replacement of an internal combustion engine by an electric driveline, the concept is holistic. The complex interaction of all components crucially affects the factors of efficiency, range and road capability.

Audi will be bringing a limited edition of the R8 e-tron to the roads in late 2012. It will be built at quattro GmbH in Neckarsulm, which has extensive experience in the construction of exclusive sports cars.

The Energy Supply
The rechargeable lithium-ion battery installed in the Audi R8 e-tron consists of single cells with a high energy density connected in parallel and in series, and ensures a high output. Under all the general constraints, an intelligent battery management system makes the energy optimally available. The 550 kg (1212.54 lb) battery stores 53 KWh of energy, with the usable share amounting to 42.4 kWh. In the final design stage of the Audi e-tron, the battery will enable a range of about 250 km (155.34 miles) when operated in the NEDC cycle.

For recharging the battery a household current with 230 volts suffices; the process takes six to eight hours for a fully discharged battery. A high-voltage current will reduce the charging time to about two and a half hours. Thanks to recuperation the battery of the Audi R8 e-tron is also recharged on the road during the braking and deceleration phases – the four electric motors are able to recover a considerable part of the energy.

The Driving Dynamics
The distribution of the electric drive torque in the R8 e-tron distinctly favors the rear axle. Like the standard Audi R8, about 70 per cent of the power acts at the rear in regular operation, with the remaining 30 per cent going to the front wheels. Should slip occur at an axle, this balance changes in a fraction of a second – so that the electrically driven high-powered sports car embodies the fundamental strength of quattro technology.

The R8 e-tron also manages the lateral dynamics through its four motors. They allow so-called torque vectoring, the selective acceleration of individual wheels and therefore active distribution of torque. Understeering and oversteering can be compensated with ultra precision by small power boosts and brake interventions. The electrically driven high-powered sports car retains exemplary neutrality even at maximum lateral acceleration, hurrying along curves as if on rails.

The running gear employs double triangular control arms at the front axle and trapezium links made of forged aluminum components at the rear axle – a configuration that has proven its merit in motor sports as an optimal layout for high dynamics, maximum precision and exact intrinsic steering behavior. Notwithstanding the firmness of the springs and shock absorbers, they still afford good comfort. The rack and pinion steering with its direct gear ratio provides finely differentiated feedback. The steering is electro-mechanically assisted depending on the speed. The Audi R8 e-tron rolls on 19 inch wheels.

The Design and the Package
The Audi R8 e-tron presents a broad and brawny figure on the road; the trapezoid of the single frame grill governs the front section, flanked by large air inlets. 1.90 meters (6.23 ft) in width and only 4.43 meters (14.53 ft) in length and 1.25 meters (4.10 ft) high – these are the proportions of a super sports car. A 2.65 meter (8.69 ft) wheelbase leaves a generous amount of space for the driver and front passenger.

A consistently lightweight design is a crucial precondition for efficiency and range, especially among electric cars. For the R8 e-tron Audi engineers exploited one of the company’s core competences: the body is aluminum; designed with Audi Space Frame technology (ASF), it weighs less than 200 kg (440.92 lb). The lightweight body is an important reason why the Audi R8 e-tron weighs in at just 1600 kg (3527.40 lb).

The Interior and the Control Concept
Unlike the standard model, the Audi R8 e-tron has a graphic display for showing the driving mode. The display lies between the two large round instruments, with the left one presenting the recuperation status and the output. The driver can select the level of recuperation by means of one-touch switches on the steering wheel, and thereby directly influence energy recovery and the braking power of the electric motors in order to increase the e-tron’s range.[wzslider height=”400″ lightbox=”true”]