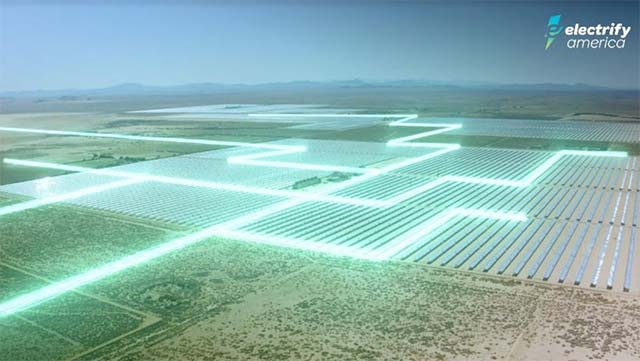 The new solar project is expected to generate 75 Megawatts (MW) per hour at peak solar capacity or an estimated annual production of 225,000 Megawatt hours. It is projected to produce enough 100% renewable energy annually to more than offset the energy currently delivered on an annualized basis to Electrify America’s customers charging on its extensive network. The solar project is targeted to be operational by mid-2023.

In becoming the largest open network in North America to enter into a VPPA, Electrify America will be supporting the key sustainability goal of “additionality,” meaning that this arrangement would result in new, additional renewable energy generation.

Electrify America is purchasing and retiring all bundled environmental certificates associated with the new solar project over a 15-year period, shifting away from the business-as-usual approach of buying environmental certificates from a third-party supplier on an unbundled basis, which does less to support additional renewable energy generation.

“Electrify America’s business model – and purpose – have always been at the forefront of efforts to reduce emissions through enabling electric mobility,” said Giovanni Palazzo, president and CEO of Electrify America. “Our commitment to customers and to a sustainable future go hand-in-hand, which is why we are investing in renewable energy generation to commit to a net zero carbon footprint associated with the energy delivered to our customers.”

Electrify America’s first solar project in the Southern California Mojave Desert may also be expanded at the option of Terra-Gen to include a co-located battery energy storage system to further increase the delivery of renewable energy to the grid during times when more costly – and often more polluting – peaking power plants may be used to meet customer needs. The potential use of a co-located battery energy storage system at the facility would add to Electrify America’s ongoing effort of deploying over 30 MW of co-located behind-the-meter energy storage systems at charging stations across the U.S. This ongoing investment from Electrify America is already decreasing the carbon profile and potential emissions associated with the electricity generation that powers the company’s charging network.

Immediate Impact
Although the new solar facility will not be online until mid-2023, Electrify America’s charging network is already backed by 100% renewable energy effective April 2022 through the purchase of environmental certificates from existing renewable generation.

Electrify America will receive the bundled environmental certificates and purchase renewable energy from SEGS IX, once part of the largest solar thermal energy generating facility in the world when completed in 1990 and also the world’s longest-operating solar thermal facility.