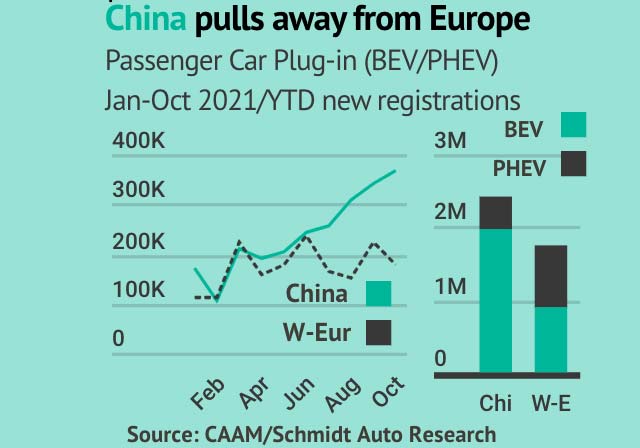 During the same January to October period, 1.98M BEVs entered China’s roads stretching from Shanghai to Beijing, according to China Association of Automobile Manufacturer data. That’s more than double (+123%) the amount that entered the roads extending from Lisbon to Linz or Athens to Aberdeen. Combined, both regions will break through 3 million new BEV passenger car units in November, with 2021 full year volumes expected to finish at around 3.5 million units. While BEVs registrations dominate the Chinese plug-in passenger car market, accounting for over 80 per cent of all new New Emission Vehicle (NEV) registrations this year, in Western Europe, the split was closer to 50/50.

However, BEVs have slowly began pulling away from PHEVs since the second half of the year in Europe.

BEV sales were ahead of PHEVs during the past three months, resulting in 327,000 new BEVs compared to 225,000 PHEVs or over 100,000 units more between August and October.

That trend is expected to continue as more competitive BEVs enter the European market, accompanied by the increase in Tesla shipments to Europe, with local German production set to begin soon.

Another perhaps significant trend to observe in China has been the gentle increase in PHEV volumes that traditionally had a lacklustre reception than BEVs.

According to China Association of Automobile Manufacturer data, Chinese PHEV volumes (67,000) came to within 10,000 units of West European volumes (77,000) in October according to European Electric Car Report monthly data.

However, as always with statistics, there is always another narrative.

Western Europe’s old guard that is undoubtedly still recording hugely impressive figures – partially boosted by a depressed total market due to the semiconductor issue alongside latest CO2 emission targets applying fully in 2021 following the 95 per cent phase-in during 2020, alongside key compliance tools gradually falling away – can still claim the top spot when it comes to new plug-in passenger car registrations mix of the total market. Combined plug-in volumes in the 18 market West European region accounted for just under every fifth (19.3%) new passenger car during the opening 10-months of 2021, while in China, the figure was “just” 14.3 per cent.