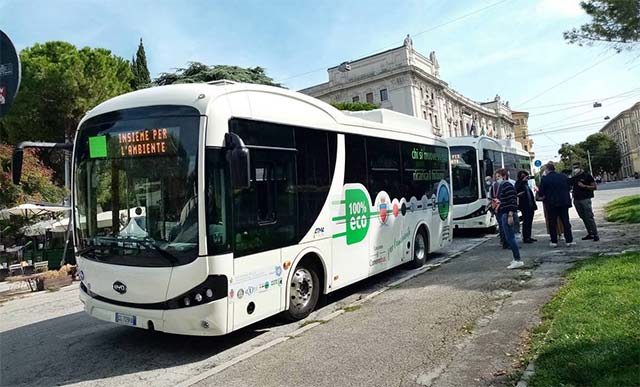 BYD, the world’s leading electric bus manufacturer, has made its debut delivery of two pure-electric Midi electric buses in Ancona, the capital of the Marche Region in Italy. The two eBuses will be operated by Conerobus, a principal Public Transport Operator of Municipality of Ancona, which will directly own one of the vehicles.

While being the first electric bus order for BYD from Ancona, it is also the first ever ‘fully electric’ bus to operate in the Marche Region. This makes the delivery of two 8.7m Midi eBuses especially important for the people who live and travel in the region, paving the way for a cleaner, healthier environment delivered through a new energy vehicle footprint.

A presentation ceremony last week marked the official handover of the two electric buses in the historic Piazza Cavour close to the Palazzo del Polpolo, as part of a special event attended by local dignitaries from the Municipality of Ancona, along with senior executives from Conerobus and BYD Europe.

Commissioning the two eBuses is the start of an exciting new era, supporting the ethics of Conerobus in its strategy to introduce non-polluting vehicles to its fleet, while offering customers high levels of comfort on their journeys.

BYD’s Midibus has the capacity for 58 passengers providing a stylish and relaxing interior with ambient lighting and well-designed seating to make journeys a comfortable and pleasurable experience. Each has been designed to accommodate wheelchair access. Safety is a key feature of the eBus design. The BYD Battery Thermal Management System not only maximises battery life for extended range, but also provides optimum levels of safety. The compact design and manoeuvrability make BYD’s Midibus the perfect choice for navigating city centre environments.

Over 100 BYD eBuses are currently on order or in operation throughout Italy, providing environmentally clean service on intensive routes in the cities of Turin, Novara, Alessandria, Milan, Padua and Messina, and other smaller towns. In Italy alone, they have combined, travelled over 7 million kilometres, saving some 7,000 tonnes of CO2 emissions from equivalent diesel-powered vehicles.

Oct 2, 2021Blagojce Krivevski
GM’s New Ultifi Platform Reimagines What it Means to Own a VehicleLordstown Motors to sell Ohio plant to Foxconn for $230m