Hyundai’s XCIENT Fuel Cell Hitting the Road in California. NorCAL ZERO, where Hyundai supplies 30 XCIENT Fuel Cell by early 2023, to be the largest deployment of Class 8 hydrogen-powered vehicles in the U.S.. 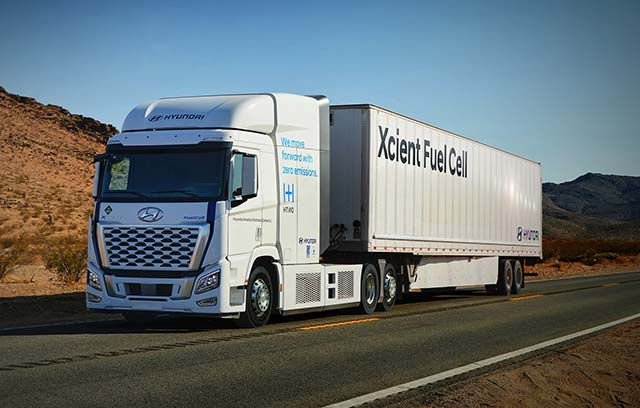 Hyundai Motor Company announced its plan to deploy the company’s latest hydrogen fuel cell electric heavy-duty trucks in California, for two publicly funded projects to improve the air quality in the region. The demo trucks that Hyundai will bring into the United States are developed based on XCIENT Fuel Cell, the world’s first mass-produced, heavy-duty truck powered by hydrogen.

Debuting last year in Switzerland, XCIENT Fuel Cell has proven its commercial viability through more than one million kilometers of driving in real-world conditions. The U.S. model provides a maximum driving range of 500 miles, or about 800 kilometers.

Hyundai will leverage insights gained from these public projects to develop it’s zero-emission commercial fleet business in the U.S. and establish local partnerships across the value chain.

Hyundai Motor teamed with public and private partners in the U.S. to operate 30 units of Class 8 XCIENT Fuel Cell trucks, starting from the second quarter of 2023. This will be the largest commercial deployment of Class 8 hydrogen-powered fuel cell trucks in the U.S.

A consortium led by the Center for Transportation and the Environment (CTE) and Hyundai Motor recently won $22 million in grants from the California Air Resources Board (CARB) and the California Energy Commission (CEC) and $7 million in additional grants from the Alameda County Transportation Commission and the Bay Area Air Quality Management District in support of this project.

Hyundai’s NorCAL ZERO project, also known as Zero-Emission Regional Truck Operations with Fuel Cell Electric Trucks, will deploy 30 units of Class 8 XCIENT Fuel Cell, with a 6×4 drive axle configuration, to northern California by the second quarter of 2023. Glovis America, a logistics service provider, will be the fleet operator of these trucks. Macquarie’s Specialized and Asset Finance business, part of its Commodities and Global Markets division, will finance the trucks through a lease to the operator.

The consortium also plans to establish a high-capacity hydrogen refueling station in Oakland, California that will be able to support as many as 50 trucks with an average fill of 30 kilograms.

Hyundai Motor and its fleet partner plan to begin operating these trucks in August. They will be used for long-haul freight operations between warehouses in southern California for a 12-month period. Hyundai will also work with the market leader in hydrogen refueling stations in California, First Element Fuel (FEF), to utilize three hydrogen refueling stations in the region to refuel the trucks.

Hyundai Motor was able to gain the support of California funding agencies and local communities to demonstrate its hydrogen fuel cell heavy-duty commercial vehicles, in large part due to the XCIENT Fuel Cell truck’s proven track record in Europe. In 2020, Hyundai announced its plan to deliver 1,600 XCIENT Fuel Cell trucks to Europe by 2025. The first 46 units were delivered to Switzerland last year, and they have cumulatively driven more than one million kilometers, or about 620,000 miles, in 11 months of service. During that time, the fleet has reduced CO2 emissions by an estimated 630 tons, compared to diesel-powered vehicles.

The Class 8 XCIENT Fuel Cell trucks that Hyundai will deploy in California will have a maximum driving range of 500 miles, because the hydrogen will be stored in greater quantity on the vehicle in tanks rated at 700 bar, or about 10,000 psi, of pressure. The maximum gross combination weight of Class 8 XCIENT Fuel Cell truck will be more than 37 tons, or about 82,000 lbs.

Based on the experience gathered from the initial demonstrations, Hyundai will accelerate its effort to officially launch its zero-emission commercial trucks in North America. Hyundai is already in talks with multiple logistics and commercial companies that are interested in leveraging hydrogen technology for their freight delivery and drayage services in the U.S. In the long-term, Hyundai will strive to establish hydrogen value chains with local partners by introducing diverse commercial vehicle lineups powered by hydrogen.