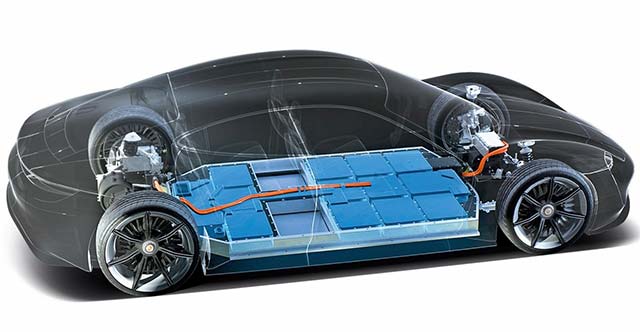 “The battery cell is the combustion chamber of the future. As a new Porsche subsidiary, the Cellforce Group will be instrumental in driving forward the research, development, production and sales of high-performance battery cells,” said Oliver Blume, Chairman of the Executive Board at Porsche. “This joint venture allows us to position ourselves at the forefront of global competition in developing the most powerful battery cell and make it the link between the unmistakable Porsche driving experience and sustainability. This is how we shape the future of the sports car.”

The chemistry of the new high-performance cells relies on silicon as the anode material. With this material, it now seems possible to significantly boost the power density compared to current good series batteries. The battery can offer the same energy content with a smaller size. The new chemistry reduces the battery’s internal resistance. This allows it to absorb more energy during energy recuperation and at the same time it offers improved performance for fast charging. Another special feature of the Cellforce battery cell is the fact that it is better able to withstand high temperatures. These are all qualities which are highly valued in motorsport. In addition, use on the race track does not necessarily require the battery to function in sub-zero temperatures nor remain stable for years over many charging cycles – goals which have yet to be achieved with this new cell technology.

The world-leading chemical company BASF has been chosen as a cell development partner for the next generation of lithium-ion batteries. As a part of the collaboration, BASF is exclusively providing high-energy HEDTM NCM cathode materials for high-performance cells that enable fast charging and high energy densities. At BASF’s manufacturing facilities for primary products of cathode materials in Harjavalta, Finland, and for cathode materials in Schwarzheide, Brandenburg, Germany, BASF will be able to produce battery materials with an industry-leading low carbon footprint from 2022.

The road to the joint venture and the partners

The idea for a manufacturing plant for high-performance battery cells came from an initiative of the P3 Group. The Stuttgart-based management consultancy developed the concept and submitted in 2019 a funding application with Customcells as part of the European IPCEI project EuBatIn (Important Project of Common European Interest – European Battery Innovation), which aims to build up a competitive European value chain for lithium ion batteries, based on innovative and sustainable technologies. From the automotive industry Porsche got involved as a project partner. This year P3 Group decided to maintain neutrality and independence in the market and not to be directly involved in the joint venture. P3 acts as a technology consultancy with a deep technical understanding in the field of battery cells and has concluded a long-term service contract with the Cellforce Group.

The contracts between Porsche and Customcells were signed on May 21, 2021. The Managing Directors of the new Cellforce Group GmbH are Markus Gräf as Chief Operating Officer and Wolfgang Hüsken as Chief Financial Officer from Porsche, and Torge Thönnessen as Chief Technology Officer from Customcells.

The new venture, in which Porsche has a majority stake of 83.75%, has its headquarters in Tübingen. The university town is also on the shortlist for the location of the battery factory, which is to be located in close proximity to the research and development center in Weissach as well as the headquarters of Porsche AG in Stuttgart-Zuffenhausen.  The number of employees is expected to grow from the initial workforce of 13 provided jointly by both companies to up to 80 by 2025. The Federal Republic of Germany and the state of Baden-Württemberg are funding the project with around €60 million.

Customcells is one of the world’s leading companies in the development of special lithium-ion battery cells. At the company’s locations in Itzehoe (Schleswig-Holstein) and in Tübingen (Baden-Württemberg), Customcells develops and produces application-specific battery cells ranging from prototypes to small and medium series – Made in Germany. Since it was founded in 2012, Customcells has acquired important know-how in the field of cell development with diverse materials (cathodes, anodes, separators, electrolytes) and coating technologies. Customcells manufactures small series of special lithium-ion battery cells, for example for the aviation and shipping industries, based on agile manufacturing concepts and state-of-the-art re-search and production facilities.