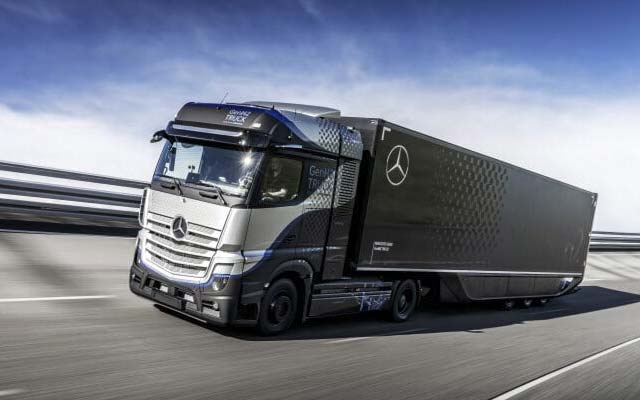 Daimler Truck AG and Shell New Energies have signed an agreement to jointly drive the adoption of hydrogen-based fuel-cell trucks in Europe. The companies plan to support the decarbonisation of road freight by building-out hydrogen-refuelling infrastructure and placing fuel-cell trucks in customers’ hands.

Shell intends to initially rollout a hydrogen-refuelling network joining three green hydrogen production hubs at the Port of Rotterdam, in the Netherlands as well as Cologne and Hamburg in Germany. From 2024, Shell aims to launch heavy-duty refuelling stations between the three locations and Daimler Truck aims to hand over the first heavy-duty hydrogen trucks to customers subsequently in 2025.

The plan aims to continuously expand the hydrogen powered freight corridor, which will cover 1200 kilometres by 2025, in order to deliver 150 hydrogen refuelling stations and around 5,000 Mercedes-Benz heavy-duty fuel cell trucks by 2030.

Shell and Daimler Truck aim to deliver the optimal hydrogen infrastructure network by designing the network based on customer needs and usage patterns. The agreement also includes the joint aim to establish an open refuelling standard defining the interaction and interface between the truck and the refuelling station in order to realize customer friendly, cost efficient, reliable and safe hydrogen refuelling. Both companies invite other potential partners to join them in their efforts.

“We want to help our customers lower their emissions by accelerating the speed at which hydrogen trucks become a commercially viable alternative to diesel equivalents,” said Ben van Beurden, Chief Executive Office of Royal Dutch Shell plc (ultimate parent company of Shell New Energies NL B.V.). “Shell and Daimler Truck intend to work together to support policies that will help to realise this key moment for fuel-cell trucks, and we invite other interested OEMs and industry partners to join us.”

Martin Daum, Chairman of the Board of Management of Daimler Truck AG and Member of the Board of Management of Daimler AG: “Shell and Daimler Truck are convinced that hydrogen-powered fuel-cell trucks will be key for enabling CO2-neutral transportation in the future. With this unparalleled collaboration between two major players of the industry, we are pioneers in tackling the question of what should come first: infrastructure or vehicles. The answer is that both have to go hand in hand and we are both excited by this important step.”

The agreement builds on Daimler Truck’s fuel-cell truck rollout plans and is an extension of Shell Group’s existing hydrogen refuelling networks in Europe and North America.