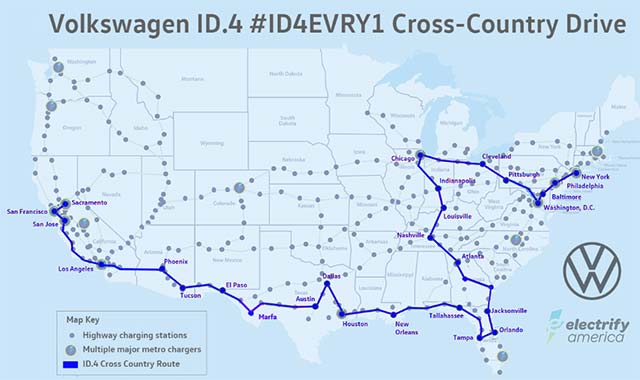 Volkswagen of America completed a drive across the country with the all-electric Volkswagen ID.4. The 6,700-mile journey started in New York City in mid-March and ended in Sacramento, CA on schedule 18 days later.

The vehicle was charged at 32 Electrify America charging stations, among a few other opportunities that included overnight charging at selected hotels.

The small team navigated more than 6,700 miles and created a daily vlog series to show highlights from each day, that can be seen on the Volkswagen USA News YouTube channel.

“We proved exactly what we set out to do with this drive, which was to show that with a little planning, covering long distances in an EV can be easy,” said Dustin Krause, Director, e-Mobility, Volkswagen of America. “We met so many people on the road and were able to show off the ID.4 to the U.S., just as deliveries are starting to happen at dealerships. The ID.4 performed flawlessly and we’re hoping this trip reiterates that electric vehicles and EV charging networks are ready for the masses.”