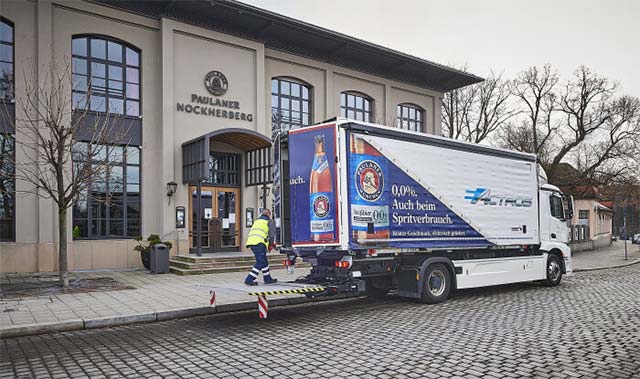 A prototype battery-powered Mercedes-Benz eActros is now operating for Paulaner Getränke und Service GmbH (Paulaner GSG). The logistics subsidiary of the time-honoured Paulaner brewery is responsible for the brewery’s distribution and is testing the eActros in operation transporting pallets of barrels and crates.

In this test, the eActros is supplying restaurants and selected beverage markets of the greater Munich area with beer, non-alcoholic beverages, event equipment and advertising materials such as glasses and tankards. The electric truck begins its daily run at the Paulaner GSG logistics centre in Gräfelfing on the western outskirts of Munich and travels between 100 and 200 kilometres per day. The eActros’ batteries are recharged overnight at the Paulaner brewery depot.

Since 2020, the eActros has been in the second phase of its practical testing referred to as the “Innovation Fleet”, which began in 2018. Paulaner now completes the tests of the electric truck for heavy-duty distribution. Mercedes-Benz Trucks plans to start series production of the eActros at the Wörth am Rhein plant in the second half of 2021.

Rico Claassen, Key Account Management at Mercedes-Benz Trucks, says, “Since 2018, our eActros prototypes have proven their worth in continuous operation at various customers in Germany and other European countries. We are delighted that the eActros is now also on the road for Paulaner. The trial in the greater Munich area is now completing the customer assignments of our eActros ‘Innovation Fleet’.”

Jörg Metzner, Managing Director, Paulaner Getränke und Service GmbH, says, “We have six locations in Upper Bavaria and offer a range of about 550 different beverages and more than 350 other catering items. We deliver these items all the way to our customers’ beverage cellars. Although hospitality and catering are currently closed in Germany, we continue to deliver to our customers as required. In this context, environmental sustainability is playing an increasingly important role for us in the logistics chain. As the test phase has shown, the locally CO2-neutral eActros is ideally suited to our use case, which is heavy-duty distribution in urban areas.”

One of the many findings gained from the “Innovation Fleet” is that the eActros prototype’s range of about 200 kilometres has proved to be absolutely realistic — regardless of payload, route or topography. The eActros is in no way inferior to a conventional diesel truck in terms of availability and performance in urban traffic, on highways or overland routes. The cooling system for the cargo and also the air conditioning — both of which are electrically operated — have been operating without any restrictions in both extreme heat and winter conditions. Drivers are very pleased with the continuous availability of torque over the entire speed range. They also report in particular on the quiet driving style and a pleasant, smooth driving experience. In addition, when driving with foresight, electrical energy can be recovered through recuperation.

The eActros: the locally CO2-neutral alternative for urban distribution

The eActros prototype is based on the chassis of the Mercedes-Benz Actros. In addition, however, the vehicle’s architecture is completely geared to electric drive and has a high proportion of specific parts. Drive is provided by two electric motors close to the rear-axle wheel hubs with an output of 126 kW each and a maximum torque of 485 Nm each. This results in 11,000 Nm each after the transmission, which is an output equivalent to that of a conventional truck. Lithium-ion batteries with 240 kWh supply the energy for the eActros.

The series-production eActros will be significantly superior to the prototype in a number of respects, such as range, power and safety. The eActros will be launched as a two- and three-axle vehicle. In addition, Daimler Trucks will embed the vehicle in a holistic ecosystem that also includes consulting services relating to e-mobility. They include route analyses, checking for possible subsidies, support for operational fleet integration, and the development of suitable charging infrastructure solutions.