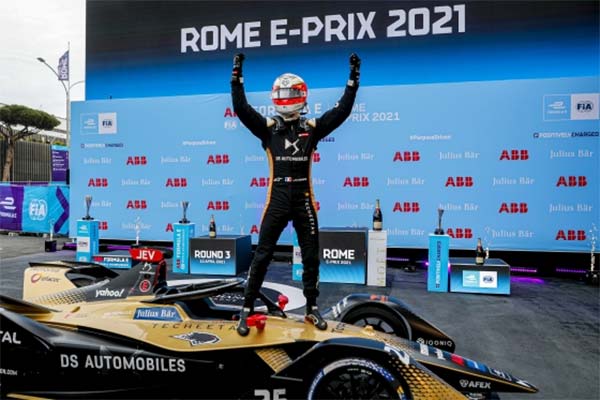 There couldn’t have been a better debut for the new DS E-TENSE FE21, as Jean-Éric Vergne took it to the highest step of the podium in a frenetic Round 3 of the 2020/21 ABB FIA Formula E World Championship in Rome.

It was a very closely fought E-Prix on the revamped and extended Roman track, now stretching 3.385 km long and it was made treacherous by the light rain that damped the track throughout the day.

Earlier in the morning, the practice sessions brought their share of emotions, as Jean-Éric was hit at the back by another car, missing the entire Free Practice 2 session due to the crash. The team did a great job in repairing the car, allowing the Frenchman to perform a troubleless qualifying and make the cut to Super Pole, where he secured 5th spot on the grid for the race start.

The race started behind the safety car as the rain re-appeared, but Vergne mastered the events, always staying in the top 5 and wisely using his ATTACK MODES to exchange positions with the leading cars in a masterful way.

Vergne timed his ATTACK MODE activations to a tee, with the top 15 runners separated by a little over five seconds at the half-way stage. He held his nerve throughout under intense pressure from a number of drivers, not lead his closest challenger Lucas di Grassi (Audi Sport ABT Schaeffler).

The Brazilian suffered a late technical issue inside the last five minutes which saw him slow and relinquish the lead to Vergne, and caused a concertina effect behind with Stoffel Vandoorne coming off worst – spinning into the barriers in avoidance after a strong recovery drive.

The race ended as it started, behind the safety car, with JEV signing his 10th win in Formula E and the 13th for DS TECHEETAH.

The ABB FIA Formula E World Championship will continue on the streets of Rome today for Round 4.