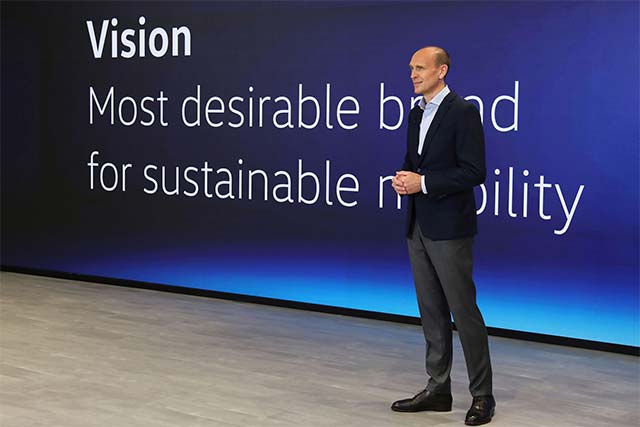 Volkswagen is stepping up its electric initiative and aligns its business even more consistently with digital. CEO Ralf Brandstätter made the announcement during a corporate strategy update. “In the coming years, we will change Volkswagen as never before,” said the CEO.

By 2030, the company will double the share of e-cars in Europe from the previously planned 35 percent to 70 percent of sales.

“Volkswagen is taking responsibility for the climate and will significantly exceed the planned EU regulation,” Brandstätter announced.

In the U.S. and China, the share of electrically powered vehicles is to rise to 50 percent by 2030. Strategic goal: positioning as the most desirable brand for sustainable mobility.

To achieve this, Volkswagen will bring out at least one new BEV model every year. The all-wheel-drive ID.4 GTX will kick things off in the first half of 2021, followed by the sporty ID.5 in the second half of the year. The ID.6 X / CROZZ, a seven-seater electric SUV for the Chinese market, will be launched in autumn. Plans for an electric car under the ID.3 are pushed up by two years to 2025.

Volkswagen will continuously optimize the Modular Electric Drive Toolkit (MEB) with improvements in acceleration, charging capacity and range. Volkswagen will also play to its strengths as a platform champion in the next generation of a high-performance all-electric drive toolkit for flat vehicles – the Scalable Systems Platform . This will be deployed in 2026 for the first time in the Volkswagen’s flagship project, Trinity.

Everything Volkswagen has planned for the future, customers will be able to experience in a vehicle for the first time in 2026. In Trinity, all of the elements will come together. The vehicle will set new standards in three respects: technologically, in terms of the business model 2.0, and with new production approaches at the Wolfsburg plant.

Trinity will enable Level 2+ automated driving from the outset and Level 4 in the future. “Trinity will become a kind of time machine for our customers, saving them time and stress. However, this technology must not become the preserve of a select elite, which is why we are scaling it to make it available for many people,” Ralf Brandstätter said.

Selling around 6 million units per year gives the company the critical mass it needs to scale autonomous driving, whose development is sophisticated, and to roll it out worldwide. Starting with Trinity in 2026, Volkswagen will therefore take the lead in the Volkswagen Group by establishing a neural network across its fully networked vehicle fleet over which vehicles will continuously exchange data, for example on the traffic situation, obstacles or accidents. This will enable Volkswagen to create a self-learning system with millions of vehicles that will benefit customers of all of the Group’s brands.

The combustion engine fleet will also be developed further in parallel to the acceleration of the e-campaign. All of the core models, including the Golf, Tiguan, Passat, Tayron and T-ROC, will get another successor. Ralf Brandstätter: “We will still need combustion engines for a while, but they should be as efficient as possible, which is why the next generation of our core products – all of which are world models – will also be fitted with the latest generation of plug-in hybrid technology, with an electric range of up to 100 kilometers.”

Brandstätter made it clear that the shift to electromobility is just the beginning of a tough selection process in the automotive industry – the digitization of products and business models is imminent.

“Of all the major manufacturers, Volkswagen has the best chance of winning the race. While competitors are still in the middle of the electric transformation, we are taking big steps toward digital transformation,” said the CEO.

Electrification, software-defined products, new data-based business models and autonomous driving – these four major forces are driving the future development of vehicles. Volkswagen is stepping up the pace of change by making software a core strength, tapping into additional revenues in the use phase of cars, and taking autonomous driving mainstream by 2030.

Brandstätter: “Just as we have boldly moved forward on the topic of e-mobility, we are also tackling the other issues of the future.”