Electric Cars on the Rise: Global Count Climbs to 10.9 Million 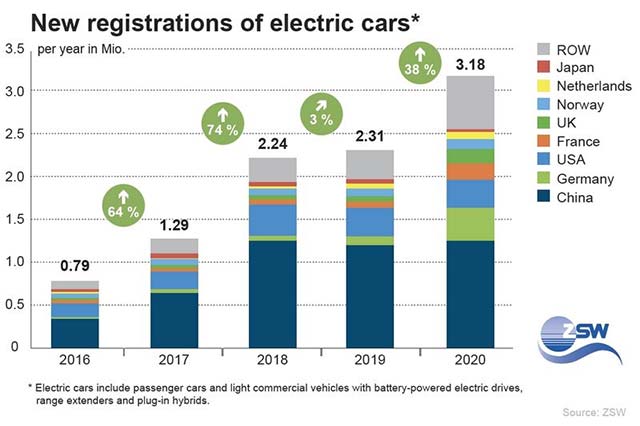 Electric mobility is clearly gaining momentum. The number of electric cars worldwide climbed to 10.9 million in 2020, up by more than three million from the previous year.

China remains the undisputed leader with more than five million e-cars in its fleet, followed by the USA with 1.77 million. Germany moved up three places and is now third overall with nearly 570,000 vehicles on the road. It did even better in terms of newly registered passenger cars, taking second place worldwide.

The source of these new figures is a recent survey conducted by the Centre for Solar Energy and Hydrogen Research Baden-Württemberg (ZSW). According to the ZSW’s data, three German automakers figure prominently among the top six brands of newly registered electric vehicles. This strong showing is a first for the nation’s automotive industry. Tesla is in the lead with nearly 500,000 new registrations, but others are catching up, above all VW. However, these figures also show that growth will have to be far more dynamic to put the climate action goals for transportation within reach by 2030.

New EV sales surged worldwide in 2020, rising 38 percent to a record high of 3.18 million and bucking the overall market trend of markedly declining sales, a slump that owes much to the coronavirus pandemic. While e-car registrations were well up in Europe, increasing by 134 percent to 1.37 million, the major Chinese and US markets contributed little to global growth. Europe overtook China, which posted just three percent growth with 1.25 million new registrations. The number of new registrations in the USA was down for the second time running, dropping by two percent to 322,400.

New registrations were well up elsewhere, most noticeably in Germany, where the count increased to 394,632 from 108,530 in 2019. This 264 percent surge marks the highest growth rate worldwide. Germany now ranks second behind China in terms of new registrations, relegating the USA to third place. France is fourth with the number of new registrations rising to 194,700, a growth rate of 180 percent. Growth rates in Denmark (245 percent), Italy (250 percent), Spain (136 percent) and the UK (140 percent) were also high, even if the absolute vehicle numbers in these markets are still relatively low.

Growth will have to be even more dynamic

“The e-vehicle market is developing very auspiciously in many countries, particularly in the European Union,” says Prof. Dr. Frithjof Staiß, Managing Director of the ZSW. “That said, this positive trend is also attributable to higher subsidies for electric vehicles as part of the coronavirus stimulus packages and other measures such as Germany’s reduced value-added tax. To achieve the German government’s goal of putting seven to ten million electric cars on the road by 2030 in an efficient way, these subsidized stimuli will have to gradually transition to market-driven growth. That will take around one million newly registered electric vehicles a year on average. The new EU climate action goal – which we can expect to be even more ambitious – is likely to require a far larger share of e-cars than previously targeted. That’s why last year’s success is just a start.”

A look at electric cars’ percentage share of total new car registrations confirms this observation. Although figures are rising in many countries, they are still far too low to achieve mainstream market penetration. In many cases, the percentage share is no larger than a single digit. Norway is an exception, where vehicles with internal combustion engines have been eclipsed by e-cars. They accounted for 62.4 percent of all new registrations in 2020. The trailing countries follow at a considerable distance. The figure in Sweden is 29.1 percent. In Germany, e-cars’ share has increased to 10.9 percent, more than tripling 2019’s figure. At 6.2 percent, the figure is far lower in China, the country with the highest absolute number of new registrations. It remains at around two percent in the USA.

Three German automakers in the top 6, Tesla is no. 1

Tesla retained its lead in new registrations with 499,600 units in 2020. The VW Group followed close behind. The Wolfsburg-based automaker has sold 421,600 vehicles to challenge for the lead. The Chinese company SAIC, which operates almost exclusively on the domestic market, took third place (254,300). BMW (192,600) and Daimler (163,000), whose plug-in hybrid models are selling well, are also in the top ten, taking fourth and sixth place, respectively.

Tesla’s top spot in cumulative new registrations worldwide is uncontested with recent years’ count coming to 1.38 million e-cars. The Chinese company BYD from China has retained second place (916,400). VW moved up to third place with 778,300 registered electric cars. Both German automakers’ figures are well up from 2019, but the gap to the market leader Tesla is still wide.

The Tesla Model 3 continues to lead the field with 362,800 new registrations. Debuting in 2020 and sold exclusively in China, the Hongguang Mini EV (119,300) follows at a considerable distance, with the Renault Zoe (102,900) close behind. The Volkswagen ID.3 was the bestseller among German brands, taking sixth place with 56,900 units sold. Other German models in the top ten are the Audi e-tron and the VW Passat GTE, a plug-in hybrid. This is the first time that three German brands rank among the ten most popular e-cars. A noteworthy development is that only one plug-in hybrid model made it into the top ten in 2020; all the others are purely battery-electric vehicles. However, three plug-in hybrid models have retained a place among the top ten in cumulative new registrations.

The top spot in cumulative new registrations goes to the Tesla Model 3 with 812,900 registered units. The Nissan Leaf (494,800) and Model S (308,700) continue to hold second and third place. A German model has yet to make it into this top ten.

New car registrations in Germany have little in common with these global figures. VW was for the first time the most frequently newly registered brand, with three models taking three of the top five spots. The Renault Zoe retained its first place with 30,376 units, up by around 21,000 units from the previous year. The e-Golf accounted for 17,438 registrations; the Tesla Model 3 for 15,202. The VW Passat GTE and VW ID.3 followed with more than 14,000 each.

“German automakers are on the right track, as the success of their efforts to catch up in terms of newly registered e-vehicles goes to show,” says Prof. Markus Hölzle, a member of the ZSW’s Board of Directors and head of the Electrochemical Energy Technologies Division. “Nevertheless, it will take even greater efforts on the part of the domestic automotive industry to keep up with the global leaders over the long term.” Hölzle notes that battery cell recycling will become even more important as the electric vehicle count rises: “Reusing metals such as cobalt and lithium as well as graphite from batteries is vital to the sustainability of production processes and provides a cheaper source of raw materials. Applied research institutes and the industry will have to step up their collaboration to this end.”

This report encompasses only those passenger cars and light commercial vehicles with battery-powered electric drives, range extenders and plug-in hybrids – that is, all vehicles that are charged with electrical power. It does not factor in full hybrid vehicles that can cover shorter distances with a relatively small battery, but cannot be charged externally; nor does it include mild hybrids and vehicles equipped with fuel cells. This assessment is based on data from the German Federal Mo-tor Transport Authority, government agencies and NGOs abroad, and other sources.

The authors of this report were able to ascertain the number of previously and newly registered electric vehicles in countries worldwide. However, data on specific makes and models is not available on a global scale. This is why the authors based their analysis of newly registered makes and models on data sourced from the 19 largest markets for e-vehicles. The ZSW’s figures represent a conservative assessment of actual developments. The paucity of globally available data that distinguishes among deregistered electric cars by their make and model prompted the authors to use the phrase “cumulative new registrations” for these figures.

Although the fuel-cell car count is still very low, it is rising with around 9,000 newly registrations worldwide in 2020, a growth rate of around 17 percent. The global fleet of fuel-cell cars now stands at some 28,000.

South Korea had the highest number of new registrations, increasing its total by another 5,800 vehicles. New registrations in Germany came to 382, bringing the total of fuel-cell cars on German roads in late 2020 to 1,016.

These statistics and other data on e-mobility are available at www.zsw-bw.de/en/media-center/data-service.