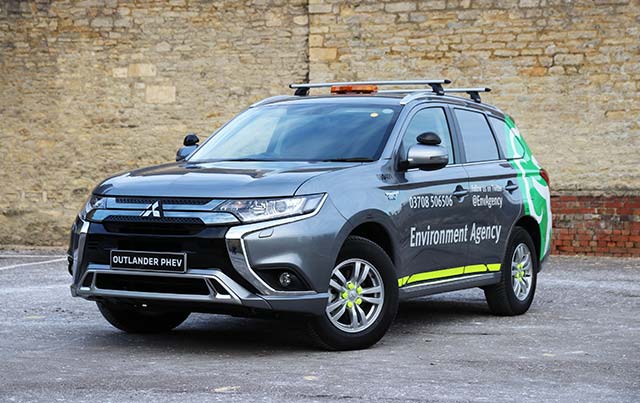 The Department for Environment, Food and Rural Affairs (DEFRA) is growing its fleet of Mitsubishi Outlander PHEV Commercial vehicles as it strives to lower its transport emissions and set a positive example for other fleet operators.

Having originally ordered 16 vehicles in April 2020, the ministerial department then increased its order by another 20 vehicles before recently upping that number by another 60 vehicles, bringing its total order of Mitsubishi Outlander PHEVs to 96, of which are taking the place of a fleet of diesel vans.

DEFRA selected the Mitsubishi Outlander PHEV based on its environmental credential as well as its practicality and driver comfort. With official WLTP fuel economy and emissions figures of 139.7mpg and 46g/km respectively, the Mitsubishi Outlander PHEV Commercial is considerably more environmentally friendly than the majority of commercial vehicles on the market, and while DEFRA’s goal will ultimately be to have its entire fleet fully electric, the Outlander PHEV provides an excellent interim means of reducing its emissions and running costs.

To ensure the vehicles are used as designed, operators are required to fully charge them every evening so that even on longer journeys the combination of electric and petrol power ensures excellent fuel economy and lower emissions (especially particulates) than tradition diesel powered vehicles. Its total combined range is 372 miles, while its WLTP electric range of 28 miles make it an ideal choice for deliveries in clean air zones.

Priced from £24,699 OTR (excluding VAT and including government plug-in van grant) the Mitsubishi Outlander PHEV Commercial is equipped with advanced four-wheel-drive and luxury features such as automatic headlamps, rain-sensing wipers, heated front seats, DAB radio, keyless operation and dual-zone climate control (which can be programmed to warm or cool the van in advance of a journey) and a full load bay bulkhead as standard. It also offers a flat load area measuring 1.65m in length and 1.00m in width between the wheel arches with a maximum payload of 500kg and a volume of more than 1,600 litres.

David Rodriguez, Sales & Marketing Director at Mitsubishi Motors in the UK, commented, “We are very proud that DEFRA chose the Outlander PHEV Commercial for its fleet and that it has substantially increased its initial order demonstrates that used correctly, PHEVs can significantly lower any business’ carbon footprint and its running costs. While Mitsubishi Motors fully supports the move to carbon-neutral transport in the future, it has pioneered and championed the PHEV as an important transitional technology. Recent studies have shown that 70% of Outlander PHEV owners are now considering a fully electric vehicle for the next purchase, compared to just 27% of surveyed drivers of conventionally-powered Mitsubishi vehicles.”