ChargePoint and NATSO progress to 2030 Fast Charging commitment in the U.S. 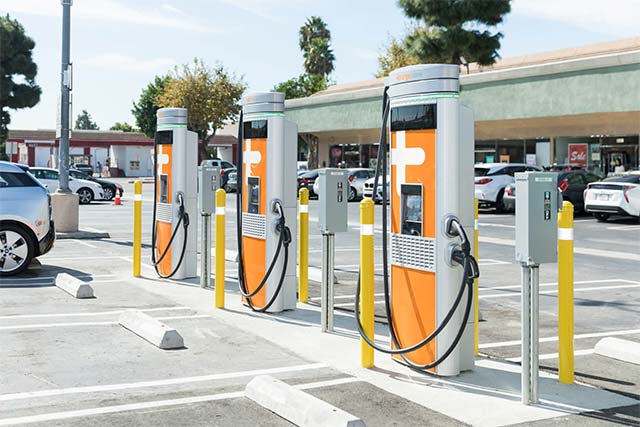 The National Highway Charging Collaborative, which will leverage $1 billion in public and private capital to deploy charging at more than 4,000 travel plazas and fuel stops serving highway travelers and rural communities nationwide by 2030, has made substantial progress in its first year, according to ChargePoint and NATSO.

According to Bloomberg NEF, electric vehicles will account for 10% of all vehicles sold by 2025, increasing to more than 29% by 2030. New quick charge sites are linking rural communities and allowing long distance electric travel across more than eight states, including California, Florida, Iowa, Missouri, and Washington, thanks to more than $11 million in public and private funding leveraged so far as part of the Collaborative. Some of the nation’s most well-known travel plaza, convenience store, and truckstop brands have backed the Collaborative, including Kum & Go, Donna’s Travel Plaza, Love’s Travel Stops, and Trillium, its alternative and sustainable fuel provider; the Iowa 80 Group, and others.

“ChargePoint’s ongoing effort to significantly expand access to charging across cities, rural communities, and along highways is core to our mission and the collaboration with NATSO is already making significant progress toward that goal,” said Colleen Jansen, Chief Marketing Officer, ChargePoint. “The National Highway Collaborative is poised to be one of the nation’s foremost examples of how partnerships can be designed to scale vital charging infrastructure. The progress to date has created the foundation for the scaling of fast charging to support long distance electric travel and enable fast charging in urban and rural communities as a complement to the buildout of level 2 charging nationwide. The buildout of charging is expected to increase in the coming years in line with dozens of new EV models anticipated to hit North American roads as the shift to electrification takes hold.”

“Together with ChargePoint, we are harnessing the nation’s vast fuel retailing network to ensure that drivers of electric vehicles have a reliable place to fuel,” said NATSO President and CEO Lisa Mullings. “In order for consumers to move to EVs, they need to be confident that they will be able to refuel as reliably as they do today. With thousands of established locations crisscrossing the nation, the private sector will ensure that drivers of electric-powered cars will not suffer from range anxiety. We are well suited to efficiently meet customer demand for electricity while providing the amenities and safe experience that they have come to expect as they refuel.”

“Kum & Go is looking to the future with electric vehicle charging,” said Ken Kleemeier, Vice President, Fuels at Kum & Go. “The marketplace is moving in this direction, and Kum & Go is putting the infrastructure in place to ensure that we are ahead of the curve.”

“We believe that EV charging will be an important service that our customers will demand in the years ahead,” said Brian Couch, Owner of Donna’s Travel Plaza in Tulalip, Washington. “We are happy to be working with NATSO and ChargePoint to help us begin offering these services to our customers.”

As part of a partnership announced in February 2020, the two organizations agreed that the National Highway Charging Collaborative will, by 2030:

The Collaborative also advocates for public policies that are designed to create a business case for off-highway fuel retailers to invest in EV charging infrastructure. In those jurisdictions, the initiative continues to identify an increasing number of public and private funding sources available to support the expansion of EV charging at strategically determined locations.