A new name for a new era: Volkswagen is rebranding as Voltswagen in the US 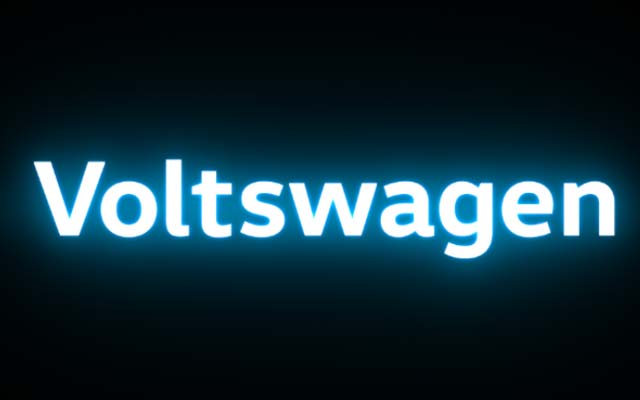 More than just a name change, “Voltswagen” is a public declaration of the company’s long-term commitment to e-mobility.

Volts are the derived units for the electric potential between two points. The new name and branding represent the turbocharged forward momentum Voltswagen has created in pursuit of its goal of moving all people point-to-point with EVs.

“We might be changing out our K for a T, but what we aren’t changing is this brand’s commitment to making best-in-class vehicles for drivers and people everywhere,” said Scott Keogh, president and CEO of Voltswagen of America. “The idea of a ‘people’s car’ is the very fabric of our being. We have said, from the beginning of our shift to an electric future, that we will build EVs for the millions, not just millionaires. This name change signifies a nod to our past as the peoples’ car and our firm belief that our future is in being the peoples’ electric car.”

ID.4, the company’s first long-range all-electric SUV, will be available in dealerships across the United States later this month. The ID.4 is not only designed to compete with mainstream compact SUVs, but it is also the company’s first product to be sold nationwide, confirming the company’s commitment to sustainable mobility.

That’s been the mission since the larger Volkswagen Group became the first major automaker to support the goals of the Paris Climate Agreement, with an added target of a 30 percent reduction in the company’s carbon footprint by 2025, and net-carbon neutrality by 2050. A resulting commitment to sell one million EVs worldwide by 2025 will see more than 70 electric models launched across the VW group brands by 2029.

With the launch of the “Drive Bigger” brand platform in 2019, Volkswagen of America, as it was known at the time, communicated a long-term vision of striving for a higher purpose, challenging us all to think beyond self-interest and consider being a part of something bigger.

The company also signaled its intentions by signing up in 2019 as one of five brands to California’s proposed fuel economy regulations, which aim to impose stricter CO2 standards in an effort to combat climate change.

Volkswagen of America was founded in 1955, and the company dared to be different from other automakers from the start.

VW first captured the attention of the American public with the Type 1 Beetle, which eventually surpassed the Ford Model T as the world’s best-selling car, with over 23 million units sold.

Volkswagen of America has become synonymous with humility, wit, and humor in its time by establishing a storied legacy of breaking from convention and emphasizing a true driver-vehicle connection, while the actual namesake translates to “the people’s car.”

“As our newly launched ID.4 campaign demonstrates, the humanity at the core of this brand remains its enduring legacy,” said Kimberley Gardiner, senior vice president, Voltswagen of America brand marketing. “The tone of Voltswagen will be a consistent thread between the branded communications for our growing electric fleet to our gas vehicles. Over the course of the next few months, you will see the brand transition at all consumer touch points. This is an exciting moment for us, and we have been working through every avenue to make the transition clear, consistent, seamless and fun for all.”

The company will preserve elements of Volkswagen’s heritage by retaining its iconic VW Dark Blue color for gas-powered vehicles and Light Blue to differentiate the new, EV-centric branding. Starting today, new branding will roll out across all of the company’s advertising, website and social media channels. Moving forward, “Voltswagen” will be placed as an exterior badge on all EV models with gas vehicles sporting the VW emblem only. Exterior and interior signage will soon roll out to all Voltswagen properties and dealerships across the US.