SKODA’s design team has unveiled images of a new project that aims to give the brand’s most iconic models a dramatic makeover. As part of SKODA’s 125th anniversary celebrations, a group of designers from across the brand have re-imagined classic models and repurposed them for the modern era.

While SKODA has earned itself a reputation for being one of the most forward-looking brands in the automotive industry, it also has a rich design history that dates back more than 125 years. During that period, the brand has created a vast array of iconic cars that have come to define the look and feel of Czech design.

A total of five classic SKODA models have been re-imagined with each model being a personal favourite of the designer responsible.

VOITURETTE
The first design takes inspiration from the brand’s first-ever production car, the Voiturette A. Created by Yuhan Zhang – a member of the interior design team at SKODA – the VOITURETTE study is an open-top two-seater carriage designed for use as a fully autonomous tourist car for the streets of Prague. 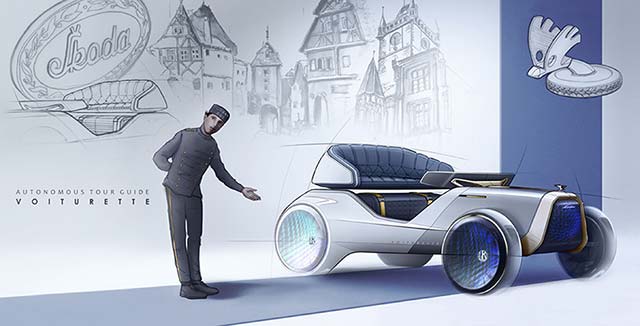 The interior features a dramatic curved information panel while the wraparound seat takes its inspiration from the single seat unit fitted to the 1905 original. Commenting on her design, Zhang explained: “I wanted to make a connection between the history of SKODA and beauty of Prague. There is a big display in the car presenting a description of the sights as you go, but it could also show passengers the history of SKODA.”

1203 CAMPER
Another SKODA icon to get a dramatic makeover is the 1203 van, which has been transformed into a 21st century campervan. The brainchild of SKODA interface designer Daniel Hájek, the 1203 formed the backbone of Czech industry through the 1970s, becoming the default choice for trade, governments and the emergency services. Production ran from 1968 until the late 1990s.

The 21st Century makeover features an electric drivetrain that allows for even greater space inside, along with a pop-up roof and all the practical touches that SKODA has become synonymous with.

In terms of exterior design, the 1203 Camper features a number of touches that combine old with new. “I thought long and hard about how to reference the original’s round lights without them being too retro.” Explains Hájek. “That’s why there’s just a hint of some curves here, but otherwise the light signature is new and bold.”

FELICIA CABRIOLET
The 1959 SKODA Felicia provided interior designer Martin Leprince with the starting point for his design makeover. Like the open-top original, the 21st Century is a masterclass in design elegance – wrapping itself around the passenger compartment while maximising exposure to the elements.

While working on the project Leprince spent hours with an original example kept at the SKODA museum in Prague. Among the many details he admired was the wraparound windscreen – and set about updating the look for his new version. As the design shows, the 21st Century Felicia has a “floating” windscreen that hovers a few centimetres above the body and curves inwards to serve as the instrument panel and infotainment display.

“I studied glass statues, and with the help of photographs and pictures I tried to come up with a way to draw a 3D glass object so that the whole was comprehensible and looked realistic. That kept me busy for quite a few days,” he explains.

“The Popular Monte Carlo is one of the most beautiful cars ever made, and I found its history fascinating as well. It is incredibly elegant and tasteful,” explained Slavov. As part of his makeover, the Bulgarian born designer opted to give the car a dramatic new roadster look. Slavov also chose to replace the traditional centre speedo with a floating hologram and a wraparound screen.

The reborn 130RS by contrast, is more recognisable as an homage to the original. “I wanted to refresh the original car, not change it.” explained Aymeric Chertier. “I retained its essence and characteristic lines and added certain details that we know from modern WRC cars, for example,” the designer continued, explaining the retro feel combined with the distinctive muscular shapes of his car. 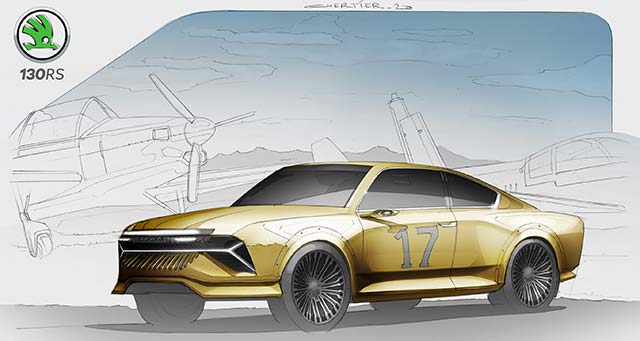 Although SKODA has no specific plans to develop any of the designs created as part of the icon project, the brand’s design team continues to seek inspiration from the past, the present and future environments.