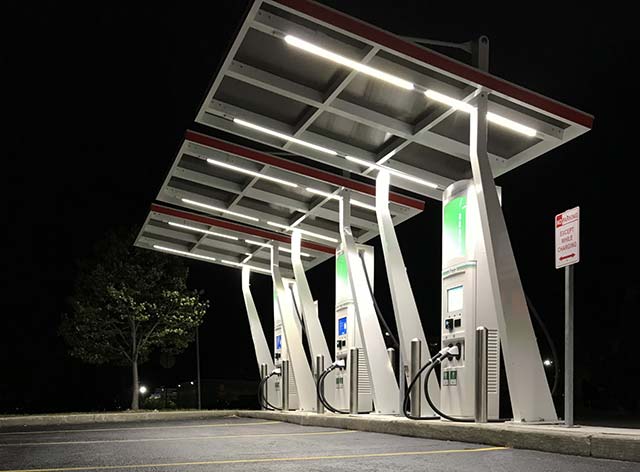 Electrify Canada continued its steady pace of growth throughout 2020 with the opening of eight new stations in Ontario and expansion into the provinces of Alberta, British Columbia and Quebec. The company now offers 18 charging stations with 72 individual fast chargers across four provinces.

In the last few months alone, Electrify Canada opened new locations in Barrie, Hamilton, Kingston, Ottawa, and Sarnia. Each station is equipped with four individual chargers that offer the fastest EV charging available today, at speeds of up to 150kW and 350kW for capable vehicles.

Electrify Canada takes a thoughtful approach to the placement of each of its stations to facilitate a charging experience that is accessible, convenient, and fast. Most of the networks charging locations are on or nearby a major route or highway, and within reach of amenities like shopping, dining and restrooms. The Ontario stations exemplify this approach – adding charge points along major routes between Ottawa and Niagara to allow EV drivers to travel the province with ease.

Since the opening of its first charging station at the Toronto Premium Outlets in fall of 2019, Electrify Canada has sought to deliver greater EV mobility to drivers with the addition of multiple new charging stations in Ontario, Alberta, British Columbia, and most recently, Quebec. The network opened its first two stations in the province this month with locations at the Montreal Premium Outlets in Mirabel and farther north in Trois-Rivières.

“Electrify Canada made tremendous progress in the last year, adding fifteen new stations, simplifying our pricing structure and beginning the roll out of overhead canopies to our stations,” said Anthony Lambkin, senior director of operations for Electrify Canada. “With locations now in four provinces, we’re eager to capitalize on this growth and further densify the network – increasing the accessibility of ultra-fast, reliable and convenient charging infrastructure to serve the growing number of Canadians choosing to drive electric.”

“While travel is not an option for most right now, our charging stations remain open as essential services for those needing to travel for work, school, or other government-sanctioned reasons.” said Lambkin.

The growing EV charging network made several major enhancements to its network in the second half of 2020, in aims of strengthening the charging experience beyond the addition of charging stations. Starting in October, Electrify Canada began installing overhead canopies at a number of its locations. Projected to cover the entire network, the canopies provide an especially welcome update this winter to those looking for protection from Canada’s unpredictable elements. The overhead canopies also offer additional lighting for better visibility while charging at night.

Electrify Canada also rolled out a simplified pricing plan in October, providing customers with competitive rates for two power levels, from 1-90kW and 1-350kW, and eliminating session fees. Specific details on the pricing can be found in the Electrify Canada mobile app, which allows users to locate a station, initiate, monitor and pay for a charging session all remotely.

The network will continue to roll out throughout 2021, with a fresh focus on its commitment to open 32 charging stations with a total of 128 fast chargers. Drivers can expect further expansion throughout Ontario with stations in London and Cornwall projected to open by mid-2021.