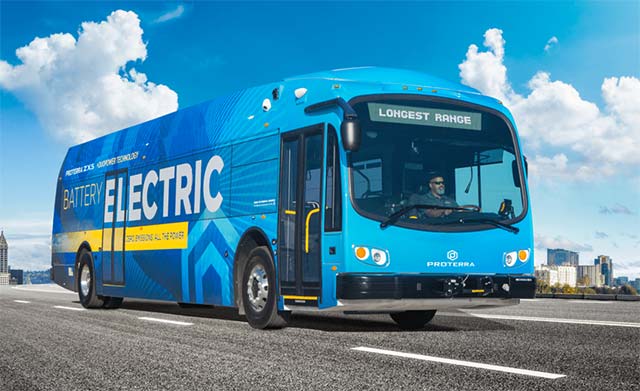 Upon closing, Proterra’s common stock is expected to trade on the Nasdaq under the ticker symbol PTRA. The transaction represents an enterprise value of $1.6 billion for Proterra.

Proterra is a high-growth commercial electric vehicle technology leader with over a decade of production experience. The Company has designed an end-to-end, flexible technology platform that delivers world-class performance and a low total cost of ownership to original equipment manufacturers (OEMs) and end customers. Proterra has three complementary businesses:

The Company’s industry-leading battery systems have been proven in more than 16 million service miles driven by its fleet of transit vehicles and validated through partnerships with world-class commercial vehicle OEMs, such as Freightliner Custom Chassis Corporation (FCCC), Thomas Built Buses, Van Hool, Bustech, and Optimal-EV. To date, Proterra has produced and delivered more than 300 megawatt-hours of battery systems, more than 550 heavy-duty electric transit buses and installed 54 megawatts of charging systems.

Following the close of the transaction, Jack Allen, Proterra’s Chairman and CEO, will continue to lead the Company, and Jake Erhard, President, CEO and Director of ArcLight Clean Transition Corp., will join Proterra’s board.

Proterra has generated strong results to date, including $193 million of expected 2020 revenue, $750 million in existing orders and backlog and 26% gross margin expansion over the last three years. Upon completion of the transaction, Proterra expects to have up to $825 million in cash to fund growth initiatives, including R&D and the expansion of its next-generation battery program. This new program is designed to improve the cost and performance of Proterra’s battery technology to enable the electrification of all commercial vehicle segments, helping reduce pollution, improve air quality, and safeguard the environment around the world.

The transaction is expected to deliver approximately $648 million in cash at closing, including approximately $278 million of cash held in ArcLight Clean Transition Corp.’s trust account from its initial public offering in September 2020. The transaction is further supported by a $415 million PIPE at $10.00 per share from key investors, including strategic partners Daimler Trucks and Constellation, existing investors Franklin Templeton, Broadscale, 40 North and G2VP, as well as new investors such as Chamath Palihapitiya, Fidelity Management & Research Company LLC, funds and accounts managed by BlackRock, Neuberger Berman Funds and affiliates of ArcLight. Proterra’s existing shareholders have agreed to convert 100 percent of their ownership stakes into the new company, and are expected to own more than 60 percent of the pro forma company at close.