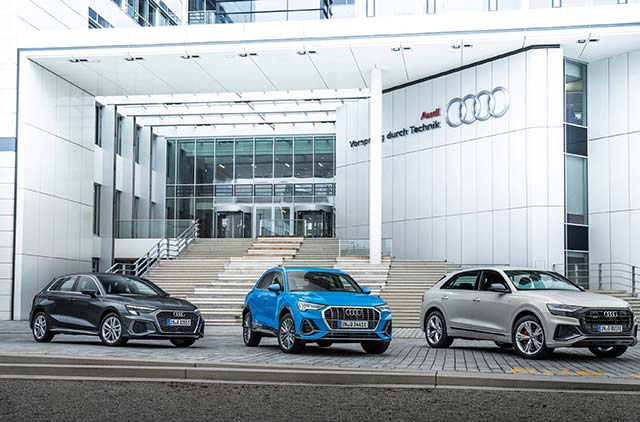 Burgeoning demand for the fully electric e-tron SUV has been instrumental in enabling Audi to not only meet but exceed its EU fleet average CO2 reduction targets in 2020, underpinning the considerable progress already made by the German premium brand in its quest to become a provider of sustainable premium mobility.

In the broader context of the Volkswagen Group, of which Audi is a member, this progress has been invaluable in effecting a 20 per cent reduction in the average CO2 emissions of the Group’s new passenger car fleet in the EU, which in 2020 stood at 99.8 g/km.

“Audi is continually pursuing the all-important goal of delivering mobility that inflicts the absolute minimum impact on our environment in both production and operation, and the marked improvement in our fleet average emissions shows that we are decisively gaining ground towards that objective,” said Director of Audi UK Andrew Doyle.

“In addition to the existing, and increasingly sought-after, e-tron models, which are set to be bookended this year by the Q4 e-tron compact SUV and the e-tron GT sports car, the eight plug-in hybrids we have already launched in segments from A3 to Q8 are also helping to drive down emissions across our fleet, and there are plenty more standard bearers to follow.”

Demand for the e-tron, which ranks as the best-selling electric vehicle among German premium manufacturers, grew by 79.5 percent in 2020 to 47,300 cars, and therefore made a substantial contribution to the 315,400 deliveries of electric models made by the Volkswagen Group in EU markets including the UK, Norway and Iceland in 2020. This total represents a fourfold increase versus 2019 and cements the Group’s position as the clear market leader in the segment in Western Europe.

As the Audi e-offensive gathers momentum during 2021 the existing e-tron and e-tron Sportback will also be joined by the Q4 e-tron and Q4 Sportback e-tron SUVs, the first of several planned Audi models to be built on the modular electric drive matrix designed for the more compact classes. At the other end of the spectrum, the world premiere of the remarkable e-tron GT sports car is scheduled for February 9, and further models featuring Premium Platform Electric (PPE) architecture developed in conjunction with Porsche are destined for the the higher segments. Audi has also already fully embraced hybridisation with TFSI e plug-in versions of the A3 Sportback, A6, A7 Sportback, A8, Q3, Q5, Q7 and Q8, with further expansion of the portfolio planned for 2021.

As one of the automotive industry’s first signatories of the Paris Climate Agreement, Audi intends to reduce its overall carbon footprint by 30 per cent by 2025, and to go on to become a balance sheet net-zero carbon emissions company in its entirety by 2050. With the help of a €37 billion investment in research and development for the period to 2024, of which €12 billion has been ringfenced purely for electric mobility, the brand aims to deliver at least 30 electrified models by 2025, of which no less than 20 will be fully electric.