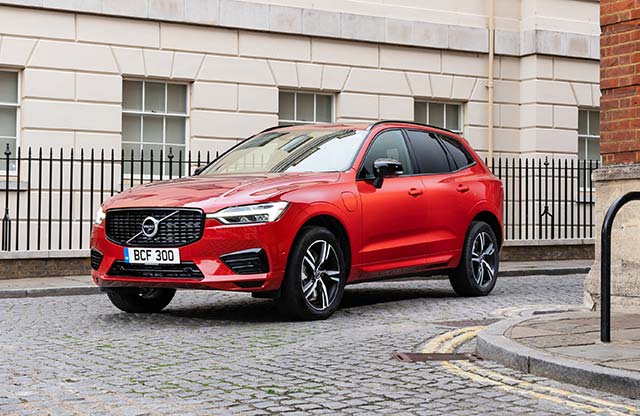 Volvo’s award-winning XC60 mid-size SUV is now available with a full range of electrified powertrains. The former World Car of the Year is offered purely with hybrid power, from mild-hybrid petrols and diesels to petrol-electric plug-in hybrids.

Extensive plug-in hybrid range
The XC60 is available with three plug-in hybrid powertrains. These combine a supercharged and turbocharged 2.0-litre petrol engine that drives the front wheels and an electric motor that powers the rears, ensuring the plug-in hybrid’s exceptional efficiency is twinned with the reassurance of all-wheel drive.

Recently introduced to the XC60 range, the entry-level plug-in is the Recharge Plug-in Hybrid T6. Despite having a total of 340hp from its petrol engine and electric motor for stirring performance when needed, its high-voltage battery enables it to travel up to 32 miles on electric power alone, with no tailpipe emissions and without using a drop of petrol. Its CO2 emissions from 55g/km are the lowest of any XC60, while WLTP Combined fuel economy is up to 113.0mpg. It also sits in the 14% BIK band for company car tax, making it a cost-effective choice for company car drivers.

The Recharge Plug-in Hybrid T6 is available in popular R-Design and Inscription trim levels, along with keenly priced Inscription Expression (£50,695 on-the-road), which makes a plug-in hybrid XC60 more accessible than ever.

Every plug-in hybrid XC60 has a 11.6kWh high-voltage battery that can be completely recharged in as little as two and a half hours.

Mild-hybrid powertrains
Every mild-hybrid powertrain in the XC60 range combines a powerful 2.0-litre engine with a 48-volt battery and a KERS kinetic energy recovery system to reduce fuel consumption and improve driveability and response, especially at low speeds. An integrated starter generator also provides faster, quieter restarting of the engine.

An XC60 for all tastes
Steve Beattie, Volvo Car UK Head of Sales, said: “The XC60 has always had the perfect blend of luxury, technology and safety, and now, thanks to the latest advanced hybrid powertrains, it has broader appeal for both private buyers and company car drivers.

“A larger range of economical and powerful engines means there is an XC60 for every premium mid-size SUV buyer.