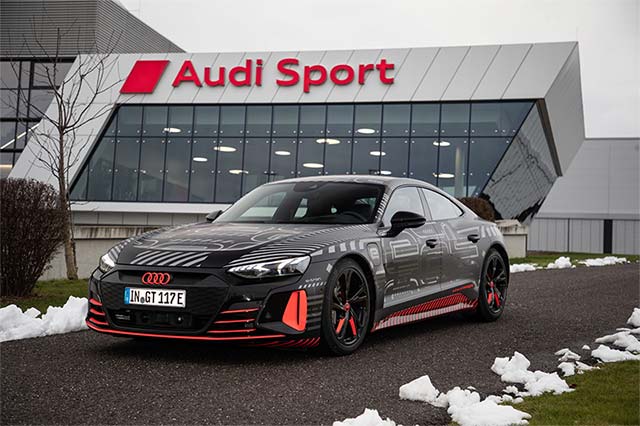 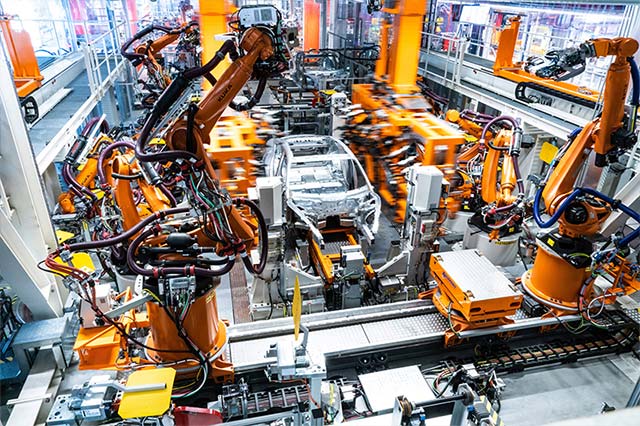 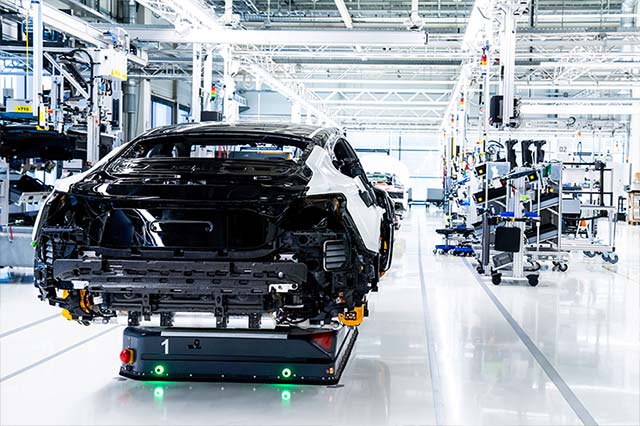 Series production of the fully electric-powered Audi e-tron GT, the brand’s most powerful electric vehicle, is now getting underway at the Böllinger Höfe at the Neckarsulm site. With 100 percent eco-electricity and heat from regenerative sources, production is net carbon-neutral. The resource-conserving vehicle production process also avoids paper and packaging, uses aluminum and polymer closed loops, and in a first for a new Audi model was planned without any physical prototypes at all.

The production process at the Audi Böllinger Höfe is every bit as unique as the car itself. No vehicle bearing the four rings has ever been readied for series production as quickly. “As the electric and sporty spearhead of the Audi product portfolio, the e-tron GT is also a perfect fit for the Neckarsulm site, especially for the Böllinger Höfe sports car production facility,” says plant manager Helmut Stettner. That series production could be started on time despite the corona pandemic is the result of pooled competences and outstanding teamwork.

The Neckarsulm site had already been a focus site for plug-in hybrids, boasting the highest density of electrified models at Audi with the plug-in and mild hybrid versions of the A6, A7 and A8. “With the Audi e-tron GT, we are producing the brand’s first fully electric car to be built at a German production site and are thus taking another giant step toward the future,” adds Stettner.

“Following in the footsteps of the Brussels and Győr sites, the Böllinger Höfe is now the first Audi production facility in Germany where production operations are net carbon-neutral. This is an important milestone for the Neckarsulm site and another step along our path to carbon-neutral production sites worldwide by 2025,” says Peter Kössler, Audi Board of Management Member for Production and Logistics, summarizing the central goal of the Mission:Zero program at Audi.

The Mission:Zero environmental program comprises a variety of measures in production and logistics to effectively and sustainably reduce the ecological footprint. Focal points include decarbonization, resource efficiency, biodiversity and innovation solutions for using water.

On the path toward carbon-neutral production, Audi is taking a consistent approach and considering the entire value chain. Logistics is thus just as important as vehicle production itself. All of the rail traffic at the Neckarsulm site is climate neutral. A variety of locomotives with CNG (compressed natural gas) or electric drives are used for shunting between the trailer yard and the plant grounds. At the initiative of Audi experts, a key carrier also uses trucks powered with biomethane for the road transport of its shipments. And two trucks powered with LNG (liquefied natural gas) are already being used to deliver parts to the site over longer distances. Another is to be added to the fleet by the end of the year. Each of them reduces emissions of CO2 by up to 20 percent and nitrogen oxides by approximately 85 percent compared with conventional diesel trucks.

Important resources are also being conserved and raw materials recycled at the site, too. The best example of this is the “Aluminum Closed Loop.” This refers to a closed recycling chain for aluminum sheet offcuts produced in the press shop at the Neckarsulm site, such as during manufacture of the sidewall frame for the Audi e-tron GT. With an extreme drawing depth of 35 centimeters (13.8 in) between the highest and lowest point, it is responsible for the pronounced shoulders above the wheel arches and thus forms the extremely distinctive quattro blisters of the e-tron GT. Every last technical possibility in the demanding processing of aluminum is tapped to do this. Thanks to the Aluminum Closed Loop, the site saves several thousand metric tons of CO2 emissions each year by returning homogeneous aluminum sheet offcuts to the supplier, where they are recycled and ultimately reused at Audi.

But ecological thinking doesn’t stop with aluminum. The motto for the recycling of polymers is: “turning the old into the new.” In a current pilot project, polymer waste from A6 and A7 assembly is sorted homogeneously, chopped up and then processed into special fibers. These filaments are then used in the 3D printers for the production process. The internal 3D printing team at the Böllinger Höfe is specialized on a wide variety of assembly aids precisely tailored to the requirements of the employees. Over 100 of these aids are used in the production of the Audi e-tron GT. The aim of the recycling project is to create a perfect polymer closed loop.

The closed loops are not the only approaches to conserve raw materials. The e-tron GT is the first Audi whose production was planned without the use of any physical prototypes. All assembly sequences were tested virtually using software developed in-house and virtual reality applications, and are now being used successfully in practice in series production. Some of the special containers for the transport of sensitive parts were also planned without prototypes using the new virtual method. This saves metal, but also packaging to protect the parts. Keywords: waste and paper avoidance. The body shop and assembly are already largely paper free. New projects, such as a maintenance app that eliminates the need for conventional, written records, also save paper. Logistics is currently testing digital labels, which should also make a contribution: Electronic labels will thus replace paper stickers on the shelves with parts containers. These are not only extremely energy efficient, but also can be easily reprogrammed in the event of changes. This is a key advantage over the conventional disposable labels. An Audi project team is also working with suppliers on additional solutions for systematically reducing packaging and thus waste.

The perfect blend of smart factory and precise craftsmanship

High quality, high performance and a passion for detail have always been distinctive features of the Böllinger Höfe. The Audi R8 has been built here since 2014. The sports car craft-scale production facility, which is part of the Audi Neckarsulm site, was expanded, upgraded and retooled in 2019 for the integration of the e-tron GT. The two most powerful and fastest series-production Audi models ever are manufactured here. “The production of two technically completely different cars on one assembly line is unique within the Group,” says Production Head Wolfgang Schanz. “Integration of the fully electric, four-door coupe transformed our small-series production facility at Audi Böllinger Höfe into a highly flexible, high-tech production facility that nevertheless retains its craft-scale character.” Customers will be able to place their orders for the fully electric Gran Turismo shortly after the world premiere early next year.