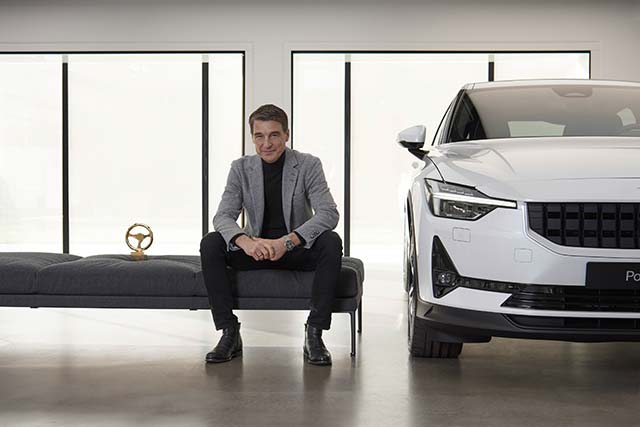 Polestar 2 has won the 2020 Golden Steering Wheel (“Goldenes Lenkrad”) award in Germany. The award, established, by AUTO BILD and BILD am Sonntag, is one of the most prestigious motoring accolades in Europe.

Polestar 2 was voted as the winner in the category of medium-sized SUVs and is thus once again recognised as one of the best cars of this year. After the “German Car of the Year” (GCOTY) award in the luxury category, this is the second award that the electric performance brand has received in Germany right after the local market launch.

“How fitting that Polestar 2 gets the Golden Steering Wheel! After all, it is not just design that distinguishes Polestar 2, but also what you experience when you sit behind the wheel,” says Thomas Ingenlath, CEO of Polestar. “We are particularly proud that Polestar 2 convinces critical industry experts as well as readers, and thus ultimately our customers”.

As in previous years, the car magazine AUTO Bild and the national weekly newspaper BILD am Sonntag called on their readers to participate in the vote for the best cars of 2020. Readers took a vote for 63 vehicles, in eight categories, that have been on the market since October 2019. Three finalists in the respective vehicle classes were determined based on readers’ votes, which were then evaluated by an independent jury of automotive experts.

To match the seat belts of the car in ‘Swedish gold’, AUTO BILD now awarded the 2020 Golden Steering Wheel to Polestar 2. Polestar 2 was the only electric model to make it into the final round in the medium-sized SUV category and was ultimately able to prevail against tough competition. Its outstanding driving experience as well as high quality of the vehicle convinced the European jury, consisting of international automobile journalists, racing drivers, celebrities and car enthusiasts.

According to readers of AUTO Bild and BILD am Sonntag, Polestar 1 is also one of the most popular cars of the year and was placed among the top three sports cars in the final round for the international award.

“The Golden Steering Wheel is undisputedly one of the most prestigious awards in the industry. The fact that both models, Polestar 1 and Polestar 2, made it to the finals and Polestar 2 won the award is a great recognition for the entire team,” says Thomas Ingenlath, who accepted the trophy at the brand’s headquarters in Gothenburg.

Awards such as the Golden Steering Wheel confirm that the Swedish company has launched Polestar 2 as one of the best cars of the year. Polestar 1, a powerful plug-in hybrid with a pure electric range of 124 km according to WLTP, has also been recognised by the press winning several international awards so far.