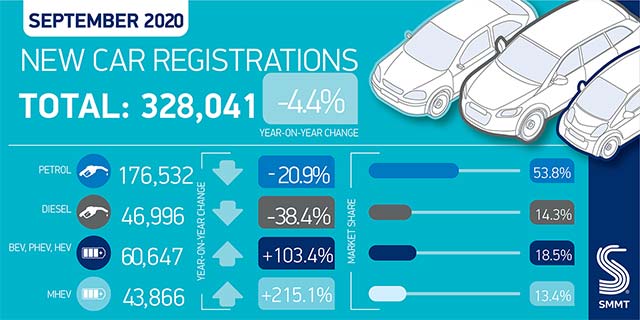 The UK new car market declined -4.4% in September, according to figures published Monday by the Society of Motor Manufacturers and Traders (SMMT). The sector recorded 328,041 new registrations in the month – the weakest September since the introduction of the dual number plate system in 1999 and some -15.8% lower thanthe 10-year average of around 390,000 units for the month.

Private registrations fell by -1.1% over the month. Demand from business was also muted, with around 10,000 fewer cars joining larger fleets, representing a -5.8% decline.

More encouragingly, battery electric and plug-in hybrid car uptake grew substantially to account for more than one in 10 registrations as new models continue to increase consumer choice. Demand for battery electric vehicles (BEVs) increased by 184.3% compared with September last year, with the month accounting for a third of all 2020’s BEV registrations. Even with this growth, however, meeting accelerated ambitions for uptake of these vehicles will require government to get behind a truly world-class package of incentives – alongside binding targets on infrastructure to reassure consumers that recharging will be as easy as re-filling.

The relaxation of COVID lockdown restrictions from June saw consumers return to showrooms and factories restart production lines, after one of the bleakest periods in the sector’s history. The market still faces continued pressure, however, with myriad challenges over the next quarter. Brexit uncertainty and the threat of tariffs still concerns the industry, while the shift towards zero emission-capable vehicles is demanding huge investment from the sector, and stalling fleet renewal across all technologies is hampering efforts to meet climate change and air quality targets now.

Additionally, consumer and business confidence is threatened by the forthcoming end of the Government’s furlough scheme, an expected rise in unemployment and continuing restrictions on society as a result of the pandemic. With little realistic prospect of recovering the 615,000 registrations lost so far in 2020, the sector now expects an overall -30.6% market decline by the end of the year, equivalent to some £21.2 billion in lost sales. 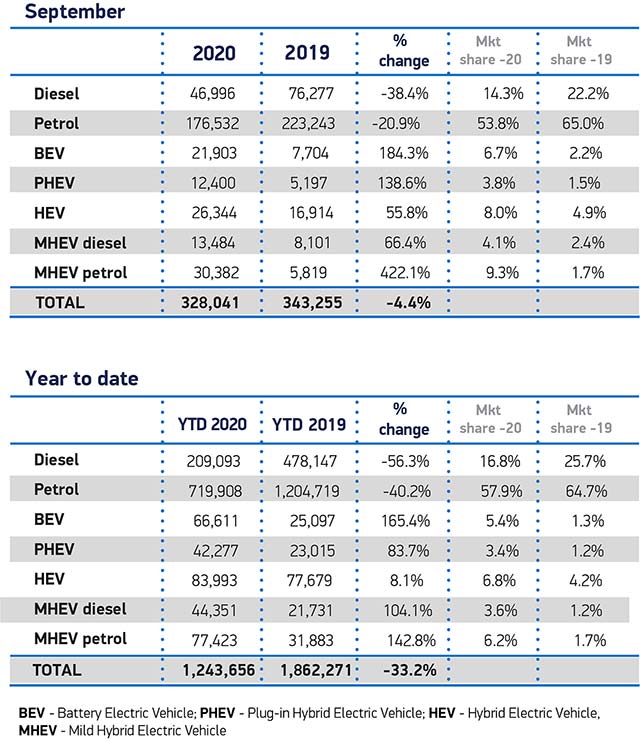 Mike Hawes, SMMT Chief Executive, said, During a torrid year, the automotive industry has demonstrated incredible resilience, but this is not a recovery. Despite the boost of a new registration plate, new model introductions and attractive offers, this is still the poorest September since the two-plate system was introduced in 1999. Unless the pandemic is controlled and economy-wide consumer and business confidence rebuilt, the short-term future looks very challenging indeed.