The future of Vehicle to Grid EV charging 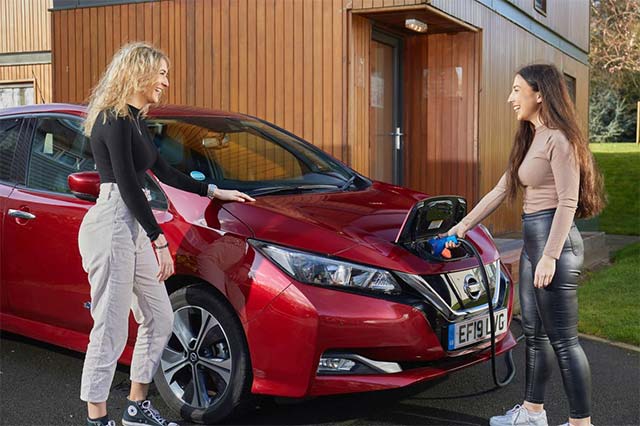 By 2050, up to 45% of households will actively provide Vehicle to Grid (V2G) services, according to National Grid Electricity System Operator (ESO)’s Future Energy Scenarios, published in July 2020. But will the average Electric Vehicle (EV) driver be able to use V2G charging over the next few years?

The rapid growth in the numbers of electric vehicles on our roads will mean more demand on local electricity networks if EVs are all plugged in at the same time, such as during the peak between 5pm and 7pm in the evening. Smart charging, or ‘V1G’, which allows management of the time when EV charging occurs – as trialled by the original Electric Nation project – will help to avoid this situation.

However, V2G charging will be more effective than smart charging. This is due to the ability to link EVs together and put significant levels of energy back into the grid at peak times, like a huge decentralised power station. V2G will therefore help to reduce the grid’s need for additional energy generation, typically supplied by fossil fuels at peak times, as well as reducing demand on electricity networks, and allowing EV drivers to use greener and cheaper electricity.

However at present only Nissan Battery Electric Vehicles (BEVs) (LEAF & e-NV200 van) can use V2G due to their CHAdeMO charging technology. Virtually all other EVs instead use the Combined Charging System (CCS) technology; the body promoting CCS, CharIN, has said it will be 2025 before it can support V2G. The EV manufacturers also need to develop their own products and bring them to market.

So there’s a need for V2G – but there’s also the potential inability of most EVs to use bidirectional charging technology over the coming five years. Therefore, to try and get a clearer picture about what will happen, Electric Nation asked a range of experts for their views about the future of V2G.

By 2050, up to 45% of households will actively provide Vehicle to Grid services according to National Grid ESO’s Future Energy Scenarios, July 2020, and V2G services could deliver up to 38 GW of flexibility from 5.5 million vehicles. However, there’s a wide range of outcomes for V2G technology across National Grid ESO’s scenarios, with the lowest estimate for the number of households actively providing Vehicle to Grid in 2050 being 4.6%. There’s also the assumption that V2G will start slowly and that there will be a 5-15 year time lag between owning an EV and participation in V2G.

Marcus Stewart, Principal Advisor, National Grid ESO, comments: “The CCS pathway is understood and we don’t see too much V2G in the early part of the scenarios. In 2050, take-up ranges from 5% – 45% across the scenarios, with 45% being the ‘Leading the Way’ early delivery of Net Zero. The two other Net Zero compliant scenarios assume 11% and 26% in 2050. This reflects the uncertainty around the take up of V2G.”

Kein-Arn Ong, Senior Energy Analyst, National Grid ESO, adds that 2025, when CCS is due to support V2G, is a long time away in the world of technical innovation, and political and legislative changes – potentially driven by the race to Net Zero –  together with consumer demand could create a greater sense of urgency.

Vehicle to Grid charging is currently only possible with CHAdeMO charging technology. CHAdeMO has defined the specifications, testing criteria and set up a system of certification. Its members have developed a variety of products in the market, readily capable of V2G, both on the charger side and the EV side.

CHAdeMO has ensured backward compatibility for its products, and will continue to do so. This means that the current CHAdeMO chargers/vehicles will be compatible with the existing and future CHAdeMO chargers/vehicles. This includes the next-generation ultra-high power charging standard (CHAdeMO 3.0), known as ‘ChaoJi’, being co-developed by the China Electricity Council (CEC) and the CHAdeMO Association. This latest version of CHAdeMO protocol enables DC charging with power over 500kW.

The Combined Charging System (CCS) does not currently enable V2G, although the body promoting CCS, CharIN, has a roadmap for implementing Vehicle to Home (V2H) and then V2G into the CCS standard by 2025. CharIN says that CCS with ISO 15118 is the key enabler of grid integration and readiness for V2G.

Even once the standard is finalised/published, it typically takes 4-5 years for products to come to the market, especially on the vehicle side, which has a longer planning/designing cycle.

There are many issues to overcome to achieve V2G, including grid capacity to handle and control Vehicle to Grid or Home (V2X) in a safe and secure way. This means a number of international standards must be agreed, then built into the communications hardware and software in the cars, the chargers and the grid.

Nissan is currently the only car manufacturer in the UK that offers CHAdeMO charging technology on BEVs – the Nissan LEAF and Nissan e-NV200 van – which are therefore the only EVs that can use V2G charging.

The recently unveiled Nissan Ariya SUV, due on sale in the second half of 2021, will feature CCS charging technology rather than CHAdeMO. Nissan says that bi-directional charging to grid or home will not be available on this vehicle in Europe at launch, but the company is looking at how it can implement it in the future, as it remains part of its strategy and it still offers benefit to the customer.

Nissan says that it will continue to offer CHAdeMO products in the future and there is no plan to switch the LEAF or e-NV200 to CCS at the moment.

BMW says that integrating as many electric vehicles as possible into the power grid in this way calls for a range of innovations in terms of vehicle technology, charging hardware, charging management, communication interfaces with energy sector stakeholders and legal parameters.

No timetable is currently set for the roll out of this technology internationally beyond the initial trial.

Audi is carrying out a research project with electric vehicles and bidirectional charging with the aim of increasing network stability, lowering electricity costs and contributing to climate protection.

The company says that the project requires a high level of technical intelligence and coordinated interaction between different technical components in terms of infrastructure and in the vehicle, but the benefit is that the battery in its e-tron EV could supply a single-family home with energy for around one week independently.

Bidirectional charging focuses mainly on use cases where homeowners use their own photovoltaic (PV) system to benefit from charging with their domestically-generated electricity. The electric car stores the excess electricity from the PV system that isn’t used by appliances in the house. If the customer has variable rates, the electric car can supply the entire house during phases when electricity prices are high.

In the event of a blackout, the system can supply the house with energy via the battery or it can even operate a building without a grid connection independently.

Audi says that grid integration applications will be available from 2022 and the different use cases including V2H and V2G will be introduced in a phased approach over subsequent years.

Dr. Marco Landi, formerly Innovation Lead – Vehicle to Grid & EV Charging at Innovate UK, explains that there are a number of technical details which may have an influence on the future of V2G in the UK.

These include whether the ISO 15118 standard that enables V2G to work with CCS – which is expected to be adopted in Europe and globally – will be supported in the UK, or whether the UK may go in a different direction. For example, will smart metering be involved in the management of smart charging and V2G? And what about the level of control by Distribution Network Operators (DNOs)? Or will the EVs themselves control V2G?

Assuming that the technical challenges can be resolved, a whole-system analysis suggests V2G-related savings will be worth £3.5 bn/year by 2040 (from “Blueprint for a Post Carbon Society”, Imperial College/OVO).

The Electric Nation V2G project is being delivered by Western Power Distribution in partnership with CrowdCharge. The project is trialling V2G ahead of time, so that actions can be taken to implement the technology.

Roger Hey, WPD’s DSO Systems and Projects Manager, sees V2G as a huge opportunity to reduce the extent, and therefore the cost, of upgrades to the electricity network and the building of new electricity generation.

Mike Potter, CEO of CrowdCharge, adds: “Vehicle to Grid charging has the potential to offer significant benefits for electricity network operators and consumers, even with the move to CCS charging on most new EVs. However unless the UK takes action following projects such as Electric Nation which are trialling and raising awareness of V2G, we could fall behind with exploiting the technology.”

Mike also makes the point that Electric Nation is different to other V2G projects because, for the first time, it is using not one, but up to five different energy suppliers. This means that the trial is a more realistic simulation of a future world in which many streets will have a number of EVs using V2G chargers operated in different ways by a range of energy suppliers. In the Electric Nation V2G trial, each supplier will use its charger groups to test its own energy services, utilising CrowdCharge’s demand management platform which provides optimised charging sessions.

Vehicle to Grid technology can offer significant benefits to help reduce demand on electricity networks, as well as allowing EV drivers to use greener and cheaper electricity – and help achieve Net Zero. And a key benefit of V2G is that the storage battery already exists in the consumer’s vehicle, reducing the need for additional investment.

In order to ensure Vehicle to Grid technology is commercially available in the future, trials such as Electric Nation – which takes the risk of owning the V2G chargers rather than consumers doing this – are essential. As well as proving that the V2G technology works, the project is testing what will happen when up to five different energy suppliers are involved.

Today, and seemingly for the next few years, V2G with BEVs in the UK is only possible with the Nissan LEAF and the Nissan e-NV200 van due to their CHAdeMO charging technology. And another barrier to take-up is that currently V2G chargers are expensive. However it’s hoped that the learning from Electric Nation will help the automotive, charging and energy industries to bring V2G to market more quickly.

A solution may come in the form of disruptive technology that isn’t currently on the radar – with companies such as Tesla having a demonstrable track record in this area – and if V2G is standard and user-friendly in an EV, it will be much easier for consumers to embrace it.