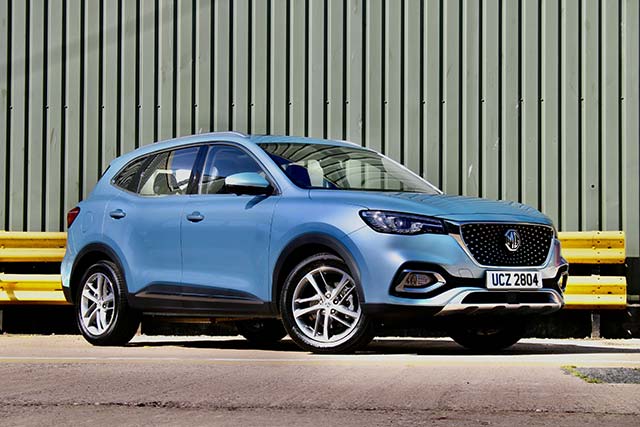 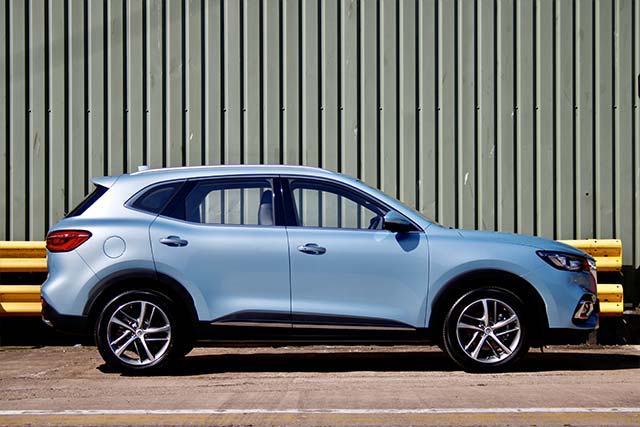 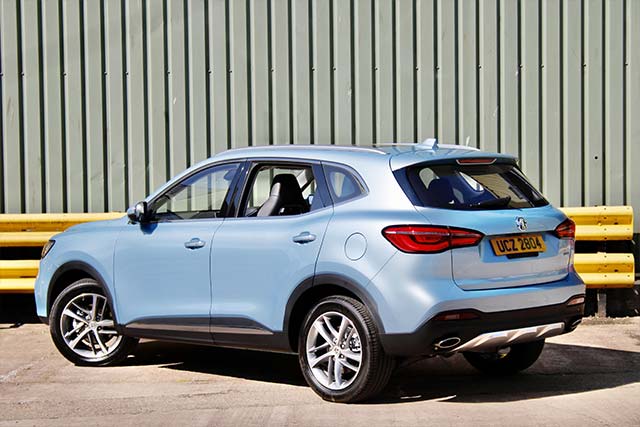 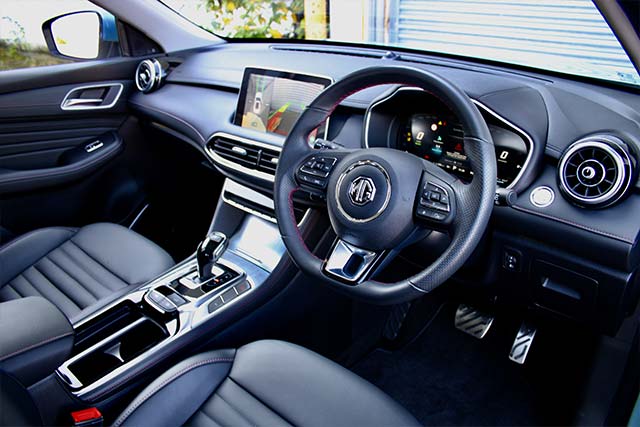 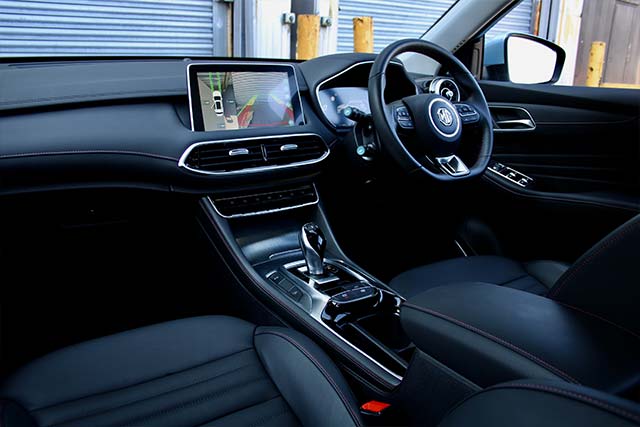 The new MG HS Plug-in SUV goes on sale in October with a great value entry price of £29,995 and adds a new dimension to MG’s electrified drivetrain line-up, building on the popularity and success of ZS EV.

It becomes MG’s first model to feature a Plug-in Hybrid drivetrain, using the existing model’s 1.5-litre turbocharged engine working in tandem with a 90KW electric motor to give an EV-only range of 32 miles with zero tailpipe emissions – plenty enough for most commutes.

Together the electric and petrol motors develop a combined power output of 258PS, giving the model a performance advantage, too. It has the ability to accelerate from 0-60mph in 6.9 seconds. MG HS Plug-in also introduces an innovative new 10-speed transmission which works with both the petrol and electric motors to optimise power delivery and efficiency.

MG HS arrived in the UK in October 2019 as the brand’s C-segment SUV, a larger alternative to the established MG ZS, which remains MG’s overall best-selling model.

MG HS Plug-in is a larger car, ideal for growing families, and features a number of high-tech features including MG Pilot – a suite of driver assistance systems that gives the MG HS one of the most comprehensive safety packages in its class. MG HS has already been endorsed by the achievement of a 5 Star Euro NCAP rating.

It’s high tech, high quality interior is matched by a dynamic package that puts it right up there among the most surefooted and engaging SUVs to drive, while comfort, refinement and pleasing details are at the fore, including a 10.1-inch colour touchscreen and 12-inch fully digital Driver Information Display.

The launch of the new Plug-in model is a crucial part of MG’s Momentum and Growth Plan, as it brings plug-in hybrid power to the sector at an incomparable price point, making a family-sized SUV PHEV attainable to those who may not realise that such a desirable car is within their budget.

With competitive PCP and PCH rates, MG HS Plug-in will appeal to families and fleets alike.

By combining high quality with keen pricing, the MG HS has already created a new definition of affordable luxury for new car buyers in the UK.

It is designed to look purposeful, sporty and perfectly at home on British and European roads. At the front, the latest iteration of MG’s stellar field grille perfectly frames the largest MG logo yet. At the rear, twin tailpipes and an aluminium lower bumper add a classy and sporty finish.

Front passengers can enjoy class leading shoulder, hip and head room with soft-touch materials in all the right places. Piano key buttons, turbine design air vents and soft-touch door cards are pleasingly tactile, adding to the sense of comfort and quality inside the car. Rear seat passengers are catered for too with the reclining seats offering bags of space, twin air vents, two USBs and a sleek fold-out arm rest, which cleverly opens to reveal storage space and twin cup holders.

It’s a well thought-out and harmonious piece of design that was conceived to appeal to forward-thinking, modern family motorists, offering a boldly styled and high quality alternative to run-of-the-mill SUVs. MG is also adding a vibrant new colour with the new MG HS Plug-in – the vibrant Pimlico Blue.

MG HS Plug-in is MG’s third model with an electrified powertrain and the company’s first ever PHEV. Alongside the established MG ZS EV and All New MG5 EV, the three electrified models are expected to account for over 50% of MG Motor UK’s total sales in 2021, further strengthening the position of what’s already Britain’s fourth best-selling EV brand.

MG HS Plug-in features the popular and proven 1.5-litre turbo engine from the petrol MG HS range, but adds a 90kW electric motor giving a combined output of 258PS (versus the 162PS of the standard petrol model).

With an impressive combined power figure and the added driveability and instant response from the electric motor, MG HS Plug-in will accelerate from 0 to 60 mph in just 6.9 seconds.

Yet despite these impressive power and performance figures MG HS Plug-in boasts very impressive economy figures and a low CO2 emissions figure of just 43g/km. In EV-only mode emissions are 0g/km and this gives a range of up to 32 miles, easily enough to cover the average daily commute.

Power from the petrol engine is channelled through a six-speed automatic gearbox, while the electric motor transfers power through a four-speed electronic drive unit. Together they combine to provide 10 electronically controlled gear ratios that always provide the optimal gear combination, keeping emissions as low and driver enjoyment and performance as high as possible.

Using a Type 2 fast charger, the MG HS Plug-in can be charged from zero to 100% in just three hours.

A great convenience feature offered as standard on Exclusive versions is the power tailgate. This opens up to an impressive 448 litres of luggage space. Folding the rear seats flat extends the total capacity to 1,375 litres. There’s also a dual height boot floor virtually eliminating any lip when loading items and giving a flat load area, with better luggage space than many rivals whose luggage area is heavily compromised by an EV drivetrain.

Just as in petrol versions, rear seat passengers are very well catered for. There is class leading leg and shoulder room, even with three adults in the back, while back seat passengers in Exclusive versions will also benefit from additional light coming into the cabin through the opening panoramic Sky Roof. Exclusive also gets power-adjustable sports seats in what is already a well-appointed cabin.

Extending the quality across the dashboard is a tactile soft-touch finish with contrasting stitching.

One of the key features of MG HS Plug-in is its high-tech driver assistance suite called MG Pilot, which is carried-over from the 5 star Euro NCAP rated petrol version and comes as standard.

MG Pilot includes a number of safety aids, including Active Emergency Braking. At speeds below 27mph, the car will automatically deploy the vehicle’s brakes to avoid a collision with a car, bicycle or pedestrian. At speeds above 27mph, the vehicle will brake automatically to reduce the likelihood or mitigate the severity of any impact.

Using an intelligent combination of forward-facing radar and camera technology, MG Pilot is an excellent companion on long distance, mile-munching journeys. Lane Keep Assist will automatically intervene if it detects the car leaving lane or leaving the carriageway, providing steering input to ensure the vehicle remains on the road. Blind Spot Detection provides a visual warning to the driver of any nearby vehicles in adjoining lanes.

Another feature is MG Pilot’s Adaptive Cruise Control. By setting the target speed and following distance, the driver instructs MG Pilot to automatically adjust the car’s speed to maintain a safe distance from the vehicle ahead. If the road clears, MG Pilot will accelerate to and maintain the set speed. When the Adaptive Cruise Control is active, MG Pilot will maintain the vehicle’s position in the lane with minimum steering input from the driver. Intelligent Speed Limit Assist will read speed limit signs and will display the current speed limit to the driver.

MG Pilot also includes Traffic Jam Assist, which enables the car to automatically follow the car in front at speeds below 35 mph, automatically steering, braking and accelerating within the same lane. If the vehicle in front comes to a complete stop, so will MG HS, and if it moves away within a short period of time, MG HS will do the same.

Drivers can be safe in the knowledge that they have excellent visibility with the advantage of Blind Spot Detection, Lane Keep Assist and Lane Departure Warning System. Monitoring the area behind the car’s C-pillars, the Blind Spot Detection system will alert the driver, through an A-pillar mounted warning light, if the unseen area is occupied by another car. Rear Cross Traffic Alert and Door Opening Warning also help to mitigate the risk of collisions.

Two models are offered in the MG HS Plug-in line-up, starting with the £29,995 Excite.