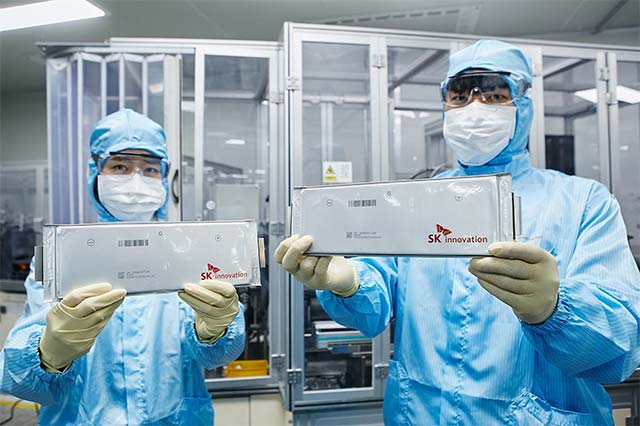 SK innovation announced that it will develop next-generation battery technology with Professor John Goodenough, a 2019 Nobel laureate in chemistry who is known as the father of the lithium-ion battery. Goodenough and Dr. Hadi Khani at The University of Texas at Austin aim to develop unique gel-polymer electrolyte for a lithium metal battery with the goal of providing higher energy density and better safety at a competitive cost.

The lithium-ion battery is considered at this time to be the most effective system for electric vehicles. However, it has limitations for increasing its energy density, which is necessary to extend the driving ranges of EVs between charges as well as create smaller, lighter batteries. In fact, with current lithium-ion chemistry, it is not likely to overcome 800 Wh/L energy density. To deliver a battery with 1,000 Wh/L energy density, a lithium metal anode and solid-state electrolyte is viewed as a promising solution.

Despite these merits, there are technology hurdles to overcome to realize an all-solid lithium-metal battery. A critical hurdle is dendrite growth, tiny needle-like projections that can create issues with the battery. These growths on the surface of the lithium metal can lead to energy loss and malfunctions, causing catastrophic failure of the battery and even safety hazards.

To overcome this hurdle and deliver a next-generation battery to market, SK innovation along with Goodenough and Khani plan to develop a new gel-polymer electrolyte system which will evenly transport lithium-ion while filtering undesired ions from traveling and ultimately suppress dendrite growth. The goal is to develop a microporous polymer matrix with weakly- coordinating-anion system that can be applied to larger, more powerful cells.

“Together with SK innovation, I hope we can open the next-generation battery era,” said Goodenough.

Dr. Seongjun Lee, Chief Technology Officer of SK innovation, said, “We are delighted to announce that SK innovation and Professor Goodenough’s group are jointly preparing for the next-generation battery era. SK Innovation believes this will be a meaningful step on our journey to deliver an innovative lithium-metal battery that is safe and cost-competitive.”

Professor John Bannister Goodenough is a materials scientist, a solid-state physicist, and a Nobel laureate in chemistry. He is a professor of mechanical engineering and materials science at The University of Texas at Austin. He is widely credited with the identification and development of the lithium-ion battery, for developing the Goodenough–Kanamori rules in determining the sign of the super exchange interaction in magnetic materials and for seminal developments in the computer random access memory.