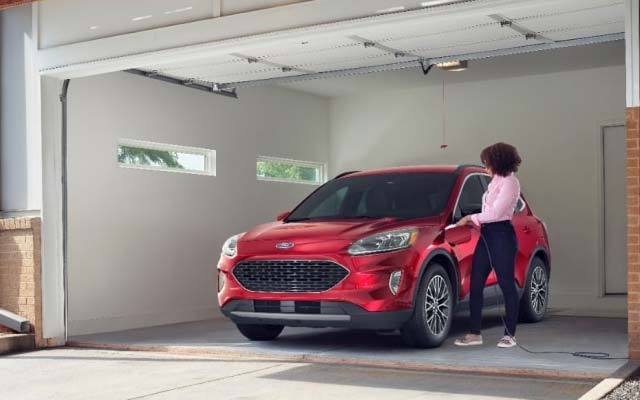 MPGe, or miles per gallon of gasoline equivalent, is an Environmental Protection Agency metric to compare the amount of energy consumed by alternative fuel vehicles – including those partially powered by electricity, like Ford Escape Plug-In Hybrid – to what traditional gas-powered vehicles consume.

“The original Ford Escape was the world’s first hybrid SUV and the all-new Ford Escape Plug-in Hybrid represents how far we’ve come in technology and efficiency,” said Hau Thai-Tang, Ford chief product development and purchasing officer. “The all-new Escape plug-in has more power and more passenger space than the Fusion Energi plug-in, as well as up to four times the cargo volume behind its second-row seats.”

Hybrids can serve as a hedge against rising gas prices. The Escape Plug-In Hybrid is available as gas prices are expected to rise, according to AAA, following the easing of stay-at-home mandates across the country. As consumers begin returning to work and taking weekend trips, demand for gasoline is expected to spike from the decades-low prices of the past two months.

“The economic and environmental impacts of this virus have created a roller coaster for consumers looking to balance value, need and efficiency going forward,” Thai-Tang said. “Ford Escape Plug-In Hybrid is that ideal balance our customers want.”

In addition to potential savings at the pump, Escape Plug-In Hybrid starts under $35,000 MSRP.

Escape Plug-In Hybrid has plenty of room for passengers and cargo thanks to the smart placement of its liquid-cooled, 14.4-kilowatt-hour lithium-ion battery below the second-row seats, rather than occupying a significant portion of the cargo area.

Hybrid models feature four modes that allow customers to select the setting most suitable for their individual needs. This means: