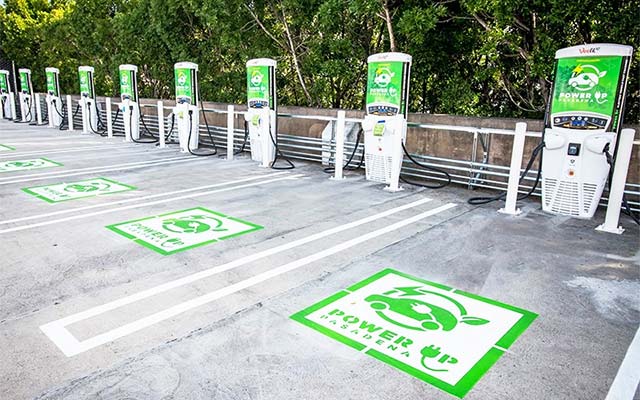 Since the City launched the PowerUp Pasadena campaign in 2018, Pasadena has offered some of the most generous rebates to purchase/lease new or used EVs throughout the state. Pasadena Water and Power (PWP), the city’s utility, has more than doubled the installation of public EV charging infrastructure within Pasadena in the past year and half, and received the distinction of having the highest percentage of EV drivers among all southern California electric utilities. The fast chargers make it possible for EV drivers to charge up and add up to 100 miles in less than 30 minutes. Within its first months of operation the Plaza captured more than 7,000 charging sessions per month.

“Making chargers publicly available is exactly what EV drivers need and will ultimately help advance EV adoption,” said Jason Fudenberg, President of the Tesla Owner’s Club of Los Angeles. “Being able to stop for a quick charge and grab a bite nearby makes road trips simple, and the cost to charge is a fraction of what I used to pay for gasoline.”

The City is focused on placing EV chargers at central locations throughout the city’s 23-square-mile boundaries that will help drivers support their daily commute and extend their electric range to reach further destinations. “The installation of these 44 fast chargers was key to giving EV drivers the confidence they needed to see that, regardless of the make and model of their EV, they now have a location they could easily access and receive a fast charge-up in minutes,” said Steve Mermell, Pasadena city manager.

The support of public-private partnerships was an effective way to advance EV infrastructure and provide the technology needed to benefit the community. With the help of grants from the California Energy Commission (CEC) and South Coast Air Quality Management District (South Coast AQMD), and revenues from the Low Carbon Fuel Standard program, the City was able to construct the entire project without the use of rate payer dollars.

To promote the plaza’s grand opening, there is currently no fee to charge on the City’s 20 fast chargers, and to support restaurant takeout service during COVID-19 recovery, the plaza is temporarily offering a 20-minute grace period.

The fast-charging location is a part of PWP’s award-winning Power UP Pasadena initiative. The campaign highlights PWP’s new EV incentive program, which offers residents up to $750 in rebates for new or used, purchase or leased EVs, and up to $600 in rebates for the installation of EV charging infrastructure. Since the start of the campaign, PWP has received more than double the EV incentive applications. This increased commitment to green living and sustainable communities further propels Pasadena into the future.