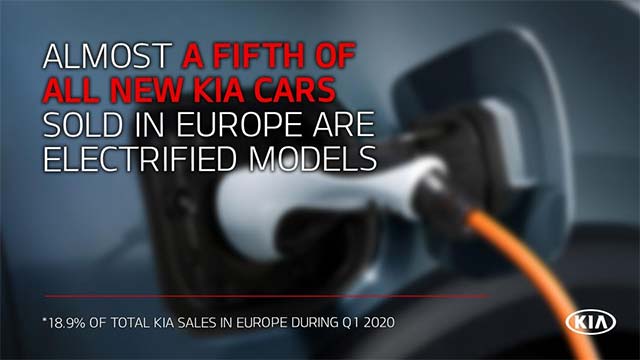 Kia Motors has seen record European sales for new hybrid and electric vehicles in the first quarter of 2020, despite a decline in total vehicle sales as a result of disruption caused by the spread of coronavirus. Kia also captured its highest-ever share of the European market during the first quarter.

Despite a challenging start to the year, sales of new electrified Kia models – hybrid, plug-in hybrid and electric vehicles – grew by 20.8 per cent, to 21,340 units. Electrified models now account for almost a fifth of all new Kia sales in Europe (18.9 per cent of all Kia Europe sales during the first quarter of 2020), up from 13.4 per cent of Kia sales during the first three months of 2019.

Emilio Herrera, Chief Operating Officer for Kia Motors Europe, commented: “The first three months of 2020 have been challenging for the whole industry due to social distancing and lockdown measures adopted across many European markets. However, we have seen growing sales for Kia’s range of hybrid and electric cars – every electrified model line we sell in Europe has seen sales growth this quarter. The arrival of new plug-in hybrid models, improved availability of EVs, and an expanded Ceed model family has also boosted our sales and market share this quarter.”

In the first quarter of 2020, Kia’s battery electric vehicles, the e-Niro and e-Soul (badged Soul EV in the UK), accounted for 32 per cent of all electrified vehicle sales, up from 22 per cent in 2019. Plug-in hybrid models, including new Plug-in Hybrid variants of the XCeed and Ceed Sportswagon, also grew in popularity, and now account for 30 per cent of all electrified Kia sales.

Kia’s best-selling model line also recorded sales growth during the first quarter of the year. Sales of the Ceed model family – comprising Ceed, Ceed Sportswagon, ProCeed, and XCeed – rose by 18.8 per cent during the first quarter, to 29,664 units. With all individual models within the family remaining popular across Europe, additional sales growth has been supported by the arrival of the all-new XCeed in the second half of 2019 and new Plug-in Hybrid variants at the start of 2020.

Apr 20, 2020Blagojce Krivevski
AIWAYS CARL robot will charge your EV autonomouslyVattenfall and Hyundai partner on EV charging in the Netherlands