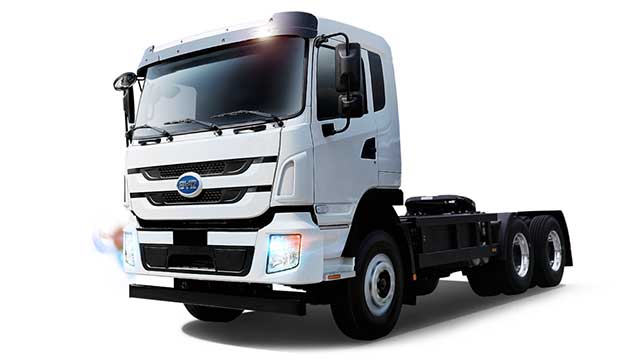 BYD announced the recent signing of a deal to bring the first fleet of electric trucks to Ecuador. On February 21, representatives from heavy-duty transport company Transcarsell and BYD Ecuador signed a contract for the acquisition of 20 electric trucks capable of transporting large multimodal containers. The first truck will be delivered in August 2020, and the rest in 2021.

The heavy-duty pure electric truck is equipped with world-leading lithium iron phosphate (LFP) batteries that have a lifespan of 15 years and a range of 150 kilometers on a single charge, complementing the truck’s integrated drive shaft and a unique control system developed by BYD. The electrohydraulic power system greatly facilitates steering and gives them a load capacity of 31.5 tons.

The truck has the advantage of operating quietly, with zero emissions and low operating costs, which greatly improve the driving experience compared to traditional fuel trucks. In addition, it comes equipped with a reliable cruise control system.

“With the arrival of these trucks to Ecuador, we are stepping up our efforts to assist the country in its transition to electric mobility and a greener future,” said Jorge Burbano, Country Manager of BYD Ecuador.

“I am interested in continuing to grow with my company, while also reflecting my commitment to the country, our workers and our customers,” said Lenin Garzon, General Manager of Transcarsell after signing the document. “I want my company to be the first of its kind to use trucks that will not only allow me to save, but also help reduce the carbon emissions in our sector.”

With its variety of pure electric truck products, BYD upholds its position as a world pioneer in eco-efficient solutions for different industries, especially in automotive and renewable energy.

In March 2019, BYD bought the first fleet of 20 pure electric buses to Ecuador, which were officially received in a ceremony led by the country’s Vice President, Otto Sonnenholzner. In the southern city of Loja, a fleet of 37 electric taxis has operated since 2017. These previous orders, along with the soon-to-arrive fleet of 20 electric trucks, put Ecuador at the forefront of Latin America’s rapid push for transport electrification.

At present, BYD’s Latin American market is rapidly expanding, and its pure electric buses, taxis and trucks are successfully servicing markets in many countries across the region, including Chile, Brazil, Colombia, Argentina, Peru and Uruguay. Globally, BYD’s pure vehicles have spread to over 300 cities, in more than 50 countries and regions.