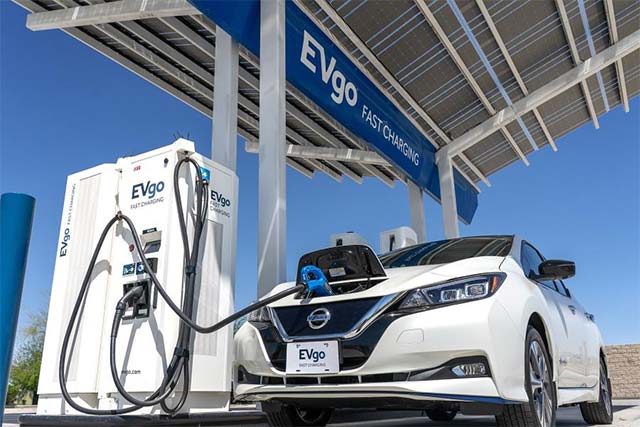 Nissan and EVgo announced today that they are providing new Nissan LEAF owners and lessees access to EVgo’s U.S. charging network through a new program, “Nissan Energy Perks by EVgo.”

Nissan Energy Perks by EVgo is a new platform designed to encourage more U.S. drivers to make the switch to an electric vehicle. Nissan will provide $250 of pre-paid charging credits with EVgo – the nation’s largest and most reliable public EV fast charging network3 – to qualifying retail customers who lease or purchase a new Nissan LEAF or LEAF PLUS in participating markets on or after November 1, 2019.

The program will provide participating retail customers with access to EVgo’s network of more than 750 public charging station locations with more than 1,200 fast chargers, as well as charging on other networks accessible through cooperative roaming agreements. As a result, new Nissan LEAF and LEAF PLUS owners and lessees will have access to more than 30,000 public EV chargers, the largest of any U.S. partnership.

“Nissan is a long-time leader in electric vehicles and this new partnership with EVgo will give new Nissan LEAF owners confidence powered by tens of thousands of chargers across America,” said Aditya Jairaj, director, EV sales and marketing, Nissan North America. “Convenient access to public chargers can be incredibly helpful for LEAF owners in their day-to-day lives.”

“The future of driving is electric, and EVgo is focused on delivering reliable and convenient fast charging for everyone,” said Cathy Zoi, CEO of EVgo. “Anyone who has tried an EV loves it, and EVgo and Nissan are making it easier for more drivers to make the switch to an electric vehicle.”

EVgo has added roaming access for EVgo customers on the ChargePoint network, providing seamless roaming to more than 28,000 Level 2 chargers and more than 300 fast chargers equipped with a CHAdeMO connector, in addition to EVgo’s industry-leading fast charging network. EVgo has also announced roaming agreements with Electrify America and EV Connect, which, upon implementation, will further expand the number of stations accessible through Nissan Energy Perks by EVgo.

In August 2019, EVgo and Nissan announced a commitment to expand the charging network for EV drivers with the installation of 200 direct current fast chargers across the United States. Each of the new EVgo fast chargers will be capable of delivering 100kW and have both CHAdeMO and CCS connectors so all EV drivers can benefit from EVgo’s network expansion. The joint investment by Nissan and EVgo builds on a six-year partnership between two of the original leaders in transportation electrification in the U.S. Nissan has installed more than 2,000 quick charge connectors across the country since 2010.

First introduced in 2010, Nissan LEAF is the number-one-selling EV in the world with more than 430,000 sold to date, including more than 130,000 sold in the U.S., since its introduction. With two available battery sizes, the Nissan LEAF and Nissan LEAF PLUS offer an EPA range of 150 and up to 226 miles respectively.

More than 100 million Americans currently live within a 15-minute drive of an EVgo fast charger, including those built in partnership with Nissan along the I-95 corridor on the East Coast and along the DRIVEtheARC corridor in California from Monterey to Lake Tahoe.