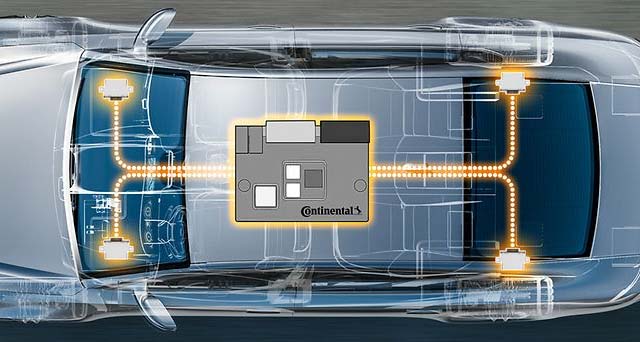 The electronics architecture of the modern generation of vehicles is undergoing a profound transformation, moving away from the many individual control units of current cars and towards a small number of high-performance computers. In the future, they will provide the computing power for the functional domains in the vehicle.

The server developed by the technology company Continental is now going into production at Volkswagen as an in-car application server (ICAS1). The largest European carmaker is using ICAS1 technology for its upcoming ID. electric vehicles based on the modular electric drive matrix MEB developed by Volkswagen.

The innovative ICAS1 concept offers numerous benefits, including a host of vehicle connectivity features such as the ability to install new functions and safety updates in the vehicle via a wireless connection. The server is based on Continental‘s many years of experience with gateway control units, whose function now forms part of the much more comprehensive ICAS1. The conceptual framework for the server is a high-performance computer platform developed by Continental in cooperation with Elektrobit.

“It is a great accomplishment for us that our server concept is now going into series production at Volkswagen. Thereby, it is not only about a new era of a development of complex electronics architecture, but rather about a milestone in the digital transformation that we reach with ICAS1,” says Helmut Matschi, member of the executive board at Continental and head of the Interior division. “Thanks to the new server architecture, vehicles will be kept up to date easier and faster than today. Therefore, we are making the vehicle an integral part of the Internet of Everything, contributing to the higher functionality and comfort in the vehicle.”

“The ICAS1 covers the previous gateway functions as well as comprehensive functions from the body control domain. It also coordinates over-the-air updates and controls charging management for the battery,” explains Johann Hiebl, head of the Body & Security and Infotainment & Connectivity business units at Continental.

Depending on the ID. vehicle model and features, in future, two or three servers will provide the computing power for the entire vehicle. Since the beginning of the development, Continental has designed the ICAS1 for the increased service life requirements in electric vehicles.

In addition to much greater computing power compared with classic automotive systems, the ICAS1 features a consistent separation of hardware and software through the basic software developed by Elektrobit on an Adaptive AUTOSAR basis. This allows both Volkswagen applications and third-party software to be integrated and updated. The middleware also supports connectivity via Gigabit Automotive Ethernet, which provides the necessary data throughput for the applications.