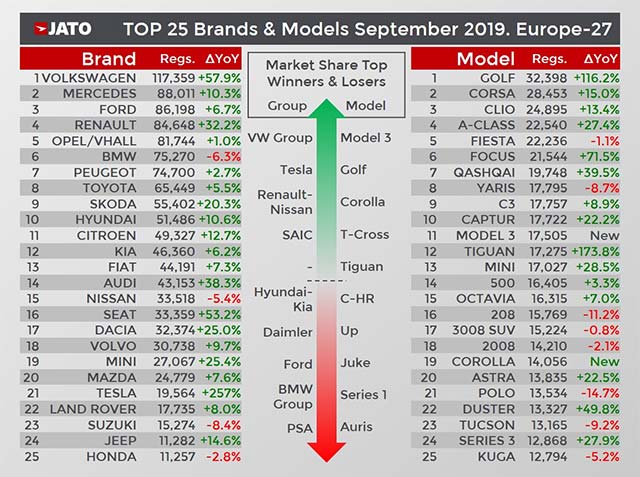 September 2019 was a significant month for battery electric vehicles (BEV), as registrations increased by 119% to 40,700 units – boosted by the performance of Tesla, BMW and Volkswagen.

Tesla recorded 19,500 registrations and controlled almost half of the BEV market, as it was boosted by the Model 3. September was a record month for the Tesla Model 3, which recorded 17,500 registrations, as it became the best- selling electric vehicle and the 11th best-selling vehicle overall.

It was the first time in history that an electric car has come so close to entering Europe’s top 10 model rankings. Meanwhile, Hybrids (HEVs) and plug- in hybrids (PHEV) also posted strong growth, as they were up by 26% and 27%, respectively.

Overall, the European car market posted significant growth in September 2019, as 1.28 million cars were registered. This increase was to be expected given the large drop posted in September 2018, when the market was down by 23% on the previous year due to the introduction of WLTP and the issues that came with it.

There is a positive net effect when comparing the combined registrations of August-September during both years, as volume jumped from 2.29 million units in 2018 to 2.35 million in 2019 – an increase of 2.6%.

“The overall growth posted in August-September indicates that, despite the market’s new challenges, consumer demand continues to be strong in Europe. This is a good sign for the coming months, when the looming CO2 targets become even more pressing for the industry,” commented Felipe Munoz, JATO’s global analyst.

When examining the breakdown by countries for August and September, the data shows 14 European markets posted growth during the two months, with notable results including Germany and Italy growing by 9.1% and 6.5%, respectively. Even the UK market grew, as volume rose by 0.7%. Spain was the exception, as the growth it posted in September (+19%) was not enough to offset the big decline it posted in August (- 30%).

“Despite the negative views about the state of the industry, the data shows that we still have a healthy European car market – although there are many challenges heading its way, of course,” continues Munoz. This is especially true when looking at demand for SUVs. In September 2019 they counted for 39% of total registrations, as their volume increased by 23% after posting a timid decline of 3% in August. In fact, September 2019’s result marked a 10% increase on September 2017 – confirming that SUVs have been a long-term source of growth for the European market.

Volkswagen Group’s strong performance did not prevent other big players from growing too, as PSA, Renault-Nissan, Hyundai-Kia and BMW Group all posted double-digit growth – although this did occur at a more moderate rate. Meanwhile, the model ranking was led by the Nissan Qashqai, and Volkswagen placed three of its models in the top 10.

There were some notable results among the new entries to the market, including: the Toyota Corolla (19th best-selling model); the Volkswagen T-Cross (5th best-selling B-SUV); the Citroen C5 Aircross (sold 7,111 units and outperformed the Grandland and Ateca); the Skoda Scala (sold 4,318 units and entered the top 15 in the B segment); the Seat Tarraco (5th best-selling mainstream midsize SUV and outperformed the Tiguan Allspace); the Lexus UX (sold 2,187 units); and the Mazda CX-30 (sold 2,143 units).