Plug in, charge up, drive off: Volkswagen Group’s future lies in e-mobility 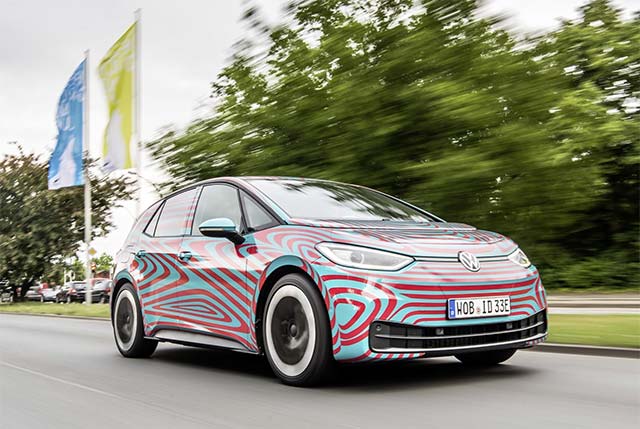 Volkswagen is driving e-mobility forward more consistently than any other automaker. The Group is demonstrating this at the IAA International Motor Show in Frankfurt.

Climate-friendly, quiet – and finally affordable. The future of the automobile lies in e-mobility. Volkswagen Group is more committed than any other automaker to electric vehicles.

With the world premiere of the ID.3, the core brand heralds the start of a new era for mobility at the Frankfurt International Motor Show (IAA) from September 12 to 22 and makes electric mobility suitable for the masses.

All the facts at a glance:

Why do we need electric mobility?

According to data from NASA’s Goddard Institute for Space Studies, 2018 recorded the fourth warmest year of global weather records. According to experts, the temperature could even rise by 1.8 to 4 degrees by 2100 – especially with the increasing use of fossil fuels. It is therefore high time to reduce man-made CO2 emissions.

With a share of 14 percent of all global greenhouse gas emissions, the transport sector is particularly in question here – and with it the automotive industry. Volkswagen Group is committed to the goals of the Paris Climate Protection Agreement, which provides for a climate-neutral society by 2050. From today’s perspective, the best and most efficient way to clean, CO2-neutral mobility is electro-mobility.

What are the goals and measures of Volkswagen Group’s e-offensive?

The e-car for everyone – that is the core of the Volkswagen Group’s e-offensive. Depending on market trends, Volkswagen intends to build and sell up to 3 million pure electric cars per year by 2025. More than 70 new, electrified Group models are due to come onto the market, including 50 purely electric vehicles. Volkswagen Group is investing heavily in the mobility of the future for the e-offensive: more than 30 billion euros are to flow by the end of 2022.

The joint ventures in China will invest a further 15 billion euros in this over the coming years. First and foremost, the Volkswagen brand wants to put attractive models on the road at affordable prices and help give the e-car market its worldwide breakthrough. The e-strategy is based on the modular electric drive matrix (MEB), a technology platform created specifically for the e-automobile.

What is the modular electric drive matrix (MEB) capable of?

The modular electric drive matrix, MEB for short, provides the Group’s brands with a common platform for electric vehicles for the first time, thus making it possible to manufacture electric cars in the high-volume segment. Its counterpart in the premium segment is the Premium Platform Electric, or PPE for short, which was developed by the Audi and Porsche brands. The MEB fully exploits the technical possibilities of e-mobility and guarantees high ranges, dynamic driving performance and a whole new level of digital networking. Design and interior can be flexibly designed with the MEB, from compact cars to SUVs and buses, everything is possible. 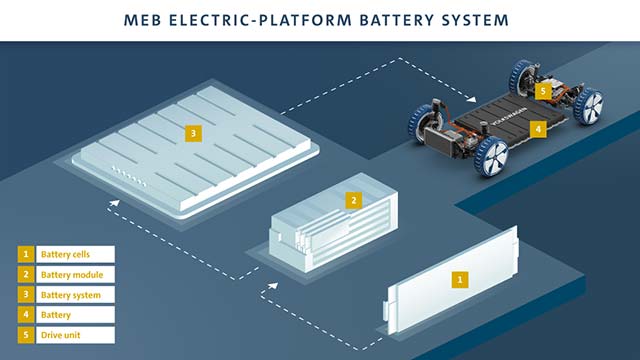 At the same time, the MEB creates the basis for making the electric car accessible to as many people as possible. By 2028, up to 15 million electric cars based on MEB are to be produced worldwide, guaranteeing considerable economies of scale. The first MEB-based model is the compact Volkswagen ID.3, which will celebrate its world premiere at the IAA.

What’s behind the ID. Family?

The Volkswagen Group’s electrical offensive sets the course for sustainable mobility. The new Volkswagen ID.3 is taking on a pioneering role. As the Group’s first electric car, it will be CO2-neutral over its entire lifecycle if the customer consistently charges with green electricity. Volkswagen is also working on a comprehensive decarbonization program with measures for other models. By 2025, the brand will have launched more than 20 purely electric models on to the market.

Volkswagen wants to make the electric car attractive and affordable for as many people as possible. The compact ID.3 will roll off the production line in Zwickau at the end of 2019. Shortly afterwards, the SUV ID. CROZZ will follow, the successor to the Bulli, ID. BUZZ and the limousine ID. VIZZION. By 2023, the Volkswagen brand alone will be investing around nine billion euros in electric mobility.

What e-strategy are the other brands in the Group pursuing?

The MEB is not only the technical basis for all models of the ID. Family from Volkswagen, but also together with the PPE, for many e-cars of the Group brands Audi, SEAT, ŠKODA and Volkswagen Commercial Vehicles. By the year 2025, Audi intends to offer twelve cars with purely electric drive in all major global markets and generate around one third of its sales with electrified models. Audi has already launched its electrification offensive with the premiere of e-tron. The era of electric mobility has also begun for Porsche. The Stuttgart-based sports car manufacturer recently presented its first all-electric electric car, the Taycan. The Spanish subsidiary SEAT is also fully committed to e-mobility and will present six electric and plug-in hybrid models by the beginning of 2021. ŠKODA is similarly ushering in the era of electro-mobility: The Czech automobile manufacturer is planning up to ten electric models, including six purely electrically powered BEVs (Battery Electric Vehicles)

At which locations are electric cars built?

Volkswagen will build electric cars based on the MEB on three different continents – Europe, Asia and North America. Production of the compact ID.3 will begin at the Zwickau plant in Germany as early as the end of 2019. The Emden and Hanover plants will also manufacture electric vehicles in the future and, together with Zwickau, will form the largest production network for electric cars in Europe. In China, two further MEB plants are being built in Anting/Shanghai and Foshan, which will start production in 2020. 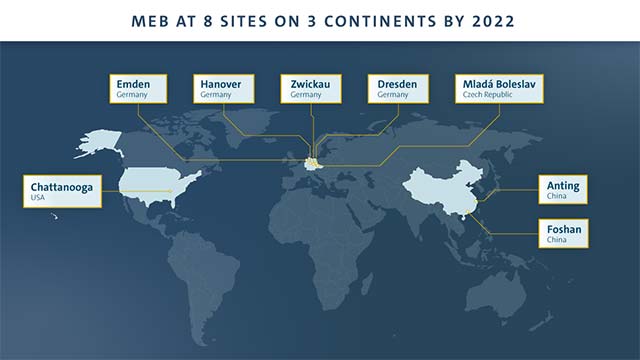 Dresden and Mlada Boleslav are also planned as European electrical engineering locations. To this end, the Volkswagen Group is investing 800 million US dollars (690 million euros) in the Chattanooga plant in the USA to expand its production capacity. Volkswagen will thus have a total of eight MEB plants for the next generation of electrically powered vehicles by 2022.

When will electric cars make the breakthrough?

Volkswagen has set itself an ambitious goal: electro-mobility should be affordable for millions of people. The first models of the ID. Family will be available from 2020, with more to follow soon. They will maximize the potential of electric vehicles in terms of range, space and dynamics – and offer electric mobility at affordable prices. Three fields of technology play a key role in this major e-offensive: Firstly, a solid charging infrastructure, even over longer distances. Secondly, a unique production platform on which e-cars can be manufactured at competitive prices. And third, a newly developed battery system that enables scalable ranges for different customer and driving profiles.

How does Volkswagen ensure a broad charging infrastructure?

A functioning charging infrastructure is the key to creating customer confidence and helping e-mobility to make a rapid breakthrough in Germany. To this end, the Volkswagen Group has integrated the topic of charging into its e-strategy. It is driving forward the expansion of the charging infrastructure in all areas of application: at home, at work, in public spaces and on motorways. The Group and its partners are building a total of 36,000 charging points throughout Europe by 2025, of which 11,000 will be through the Volkswagen brand alone. They are located primarily at Volkswagen locations – and at around 3,000 Volkswagen dealers in all major cities. 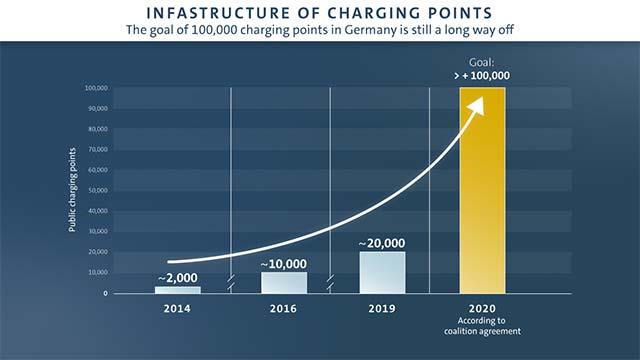 The Volkswagen Group is investing a three-digit million sum in the charging stations at its locations alone. At the same time, the Group is creating suitable infrastructure solutions – for example through the development of a mobile fast-charging pillar or as an electricity provider through which customers can purchase CO2-neutral Volkswagen electricity.

Sep 9, 2019Blagojce Krivevski
Launch of the Superb iV and Citigoe iV marks the beginning of the electrified era for SKODAPorsche starts Taycan production