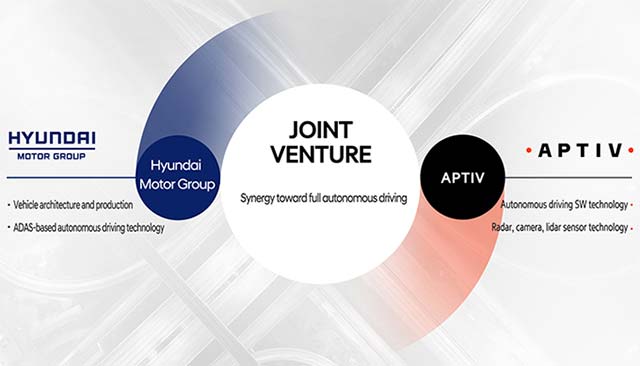 Hyundai Motor Group and Aptiv announced that they will be forming an autonomous driving joint venture. This partnership brings together one of the industry’s most innovative vehicle technology providers and one of the world’s largest vehicle manufacturers.

The joint venture will advance the design, development and commercialization of SAE Level 4 and 5 autonomous technologies, furthering the partners’ leadership position in the global autonomous driving ecosystem. The joint venture will begin testing fully driverless systems in 2020 and have a production-ready autonomous driving platform available for robotaxi providers, fleet operators, and automotive manufacturers in 2022.

As part of the agreement, Hyundai Motor Group and Aptiv will each have a 50 percent ownership stake in the joint venture, valued at a total of USD 4 billion. Aptiv will contribute its autonomous driving technology, intellectual property, and approximately 700 employees focused on the development of scalable autonomous driving solutions. Hyundai Motor Group affiliates – Hyundai Motor, Kia Motors and Hyundai Mobis – will collectively contribute USD 1.6 billion in cash at closing and USD 0.4 billion in vehicle engineering services, R&D resources, and access to intellectual property.

The partnership reinforces the companies’ shared vision of making mobility more safe, green, connected, and accessible by advancing the development and commercialization of the highest-performing and safest autonomous vehicles.

“The new joint venture marks the start of a journey with Aptiv toward our common goal of commercializing autonomous driving,” said Euisun Chung, Executive Vice Chairman, Hyundai Motor Group. “The combined capabilities of Aptiv, a leading global technology company, and our Group, a global OEM, will create invaluable synergy to lead the autonomous driving landscape.”

The new joint venture will be led by Karl Iagnemma, President, Aptiv Autonomous Mobility and headquartered in Boston, with technology centers across the United States and Asia, including Korea. Hyundai Motor Group and Aptiv will each appoint an equal number of directors to govern the joint venture.

The joint venture’s Korea operations will serve as a key technology center as well as a base for vehicle modification and a testbed for autonomous driving mobility service platforms. Hyundai Motor Group’s strong presence in the local automotive market and the country’s world-class 5G infrastructure are anticipated to spur the partnership’s development efforts.

Hyundai Motor Group and Aptiv: Creating a Safe and Trusted Driverless World
Hyundai Motor Group has created a value chain based on automobiles, steel, and construction, and its business areas also include logistics, finance, IT and service. With approximately 250,000 employees worldwide, the Group’s key affiliates include auto-making arms Hyundai Motor and Kia Motors as well as auto-parts making unit Hyundai Mobis.

Hyundai Motor Group’s latest investment epitomizes the Korean automotive leader’s ongoing efforts towards realizing fully autonomous driving with the highest level of safety. Hyundai first began testing autonomous vehicles on public roads in the U.S. in 2015 with a license from the state of Nevada.

During CES in 2017, Hyundai advanced its trials in urban environments, demonstrating self-driving technologies to the public with its autonomous IONIQ model. In February 2018, Hyundai successfully demonstrated Level 4 autonomous driving technology on a highway, as five NEXO fuel cell electric vehicles travelled 190 kilometers from Seoul to Pyeonchang without any driver engagement.

Aptiv’s autonomous driving engineers have been leading the development of software for high-performing self-driving cars since the historic 2007 DARPA Challenge. The company conducted the first coast-to-coast automated drive in the United States in 2015, and was the first to commercially deploy autonomous vehicles globally.

Aptiv operates more than 100 autonomous vehicles on multiple continents, across a range of driving conditions and environments, including the largest commercial deployment of autonomous vehicles in Las Vegas with a ride-hailing network. To date, the company has provided more than 70,000 paid autonomous rides, servicing more than 2,700 destinations, while maintaining a near perfect average passenger rating of 4.95-out-of-five stars.

The transaction is subject to regulatory approval and other customary closing conditions and is expected to close early in the second quarter of 2020.