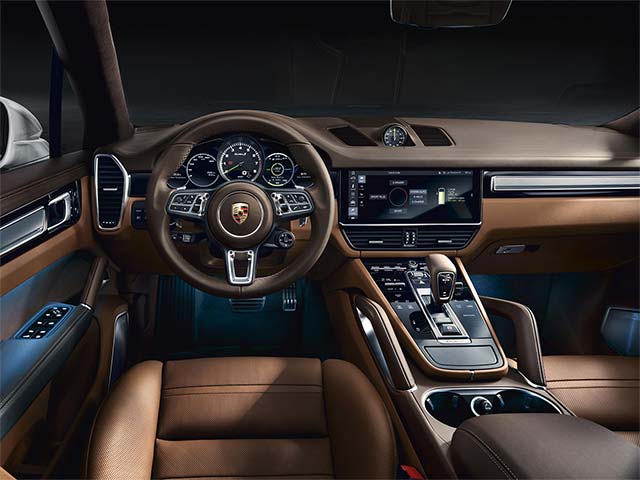 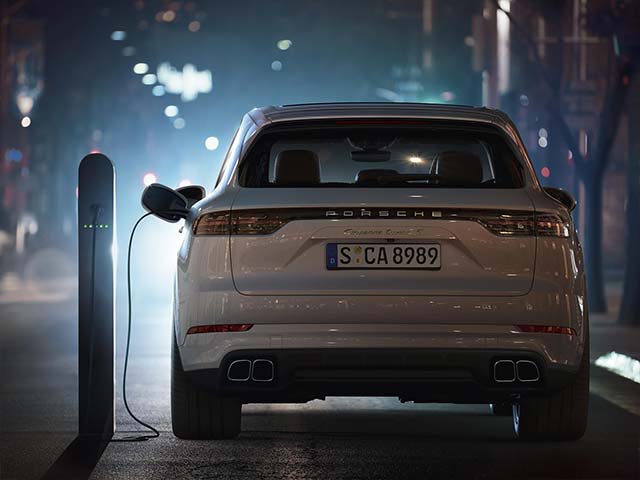 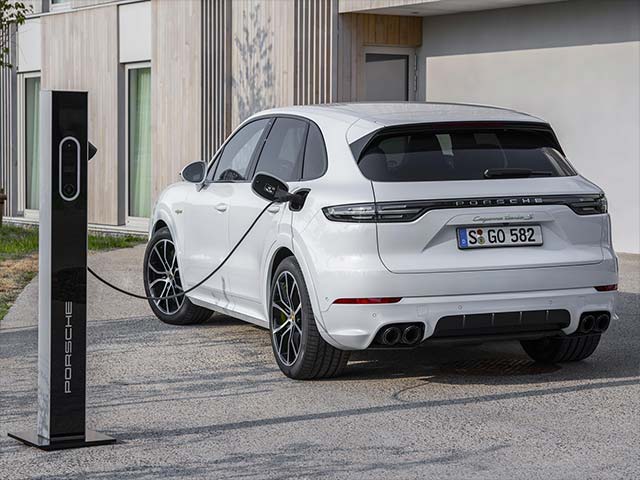 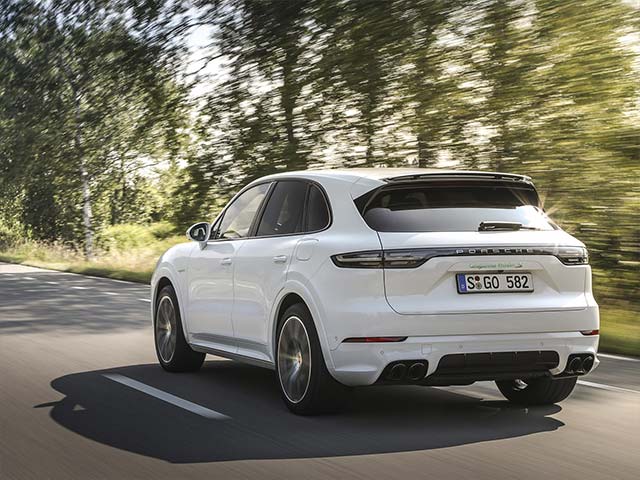 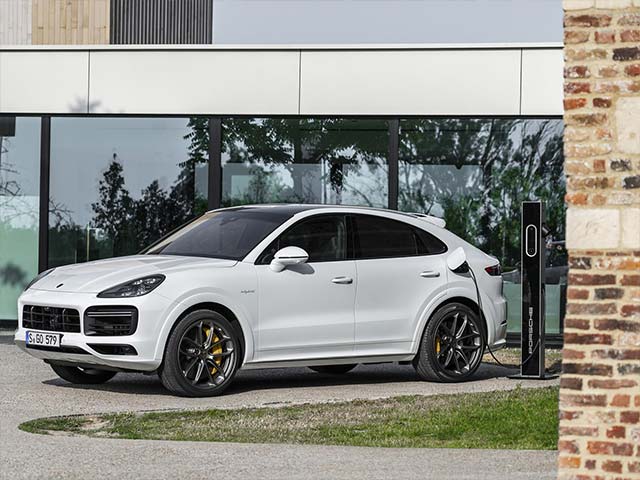 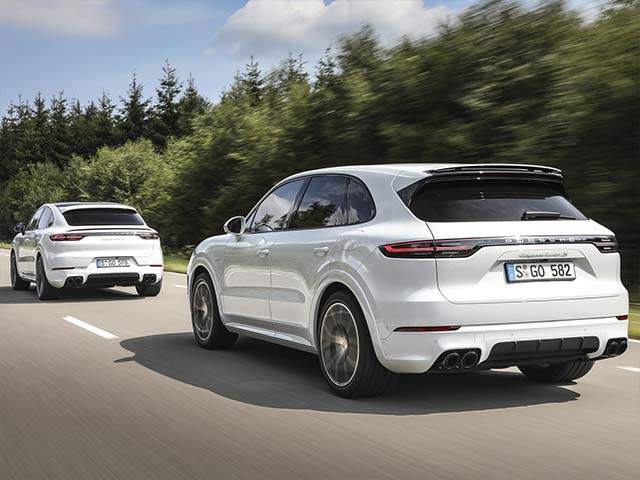 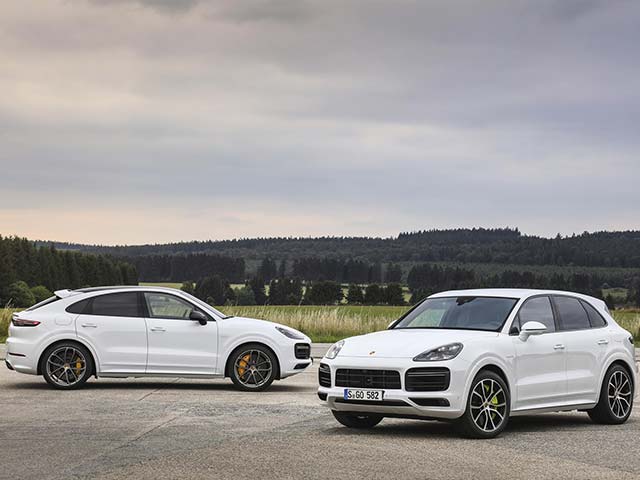 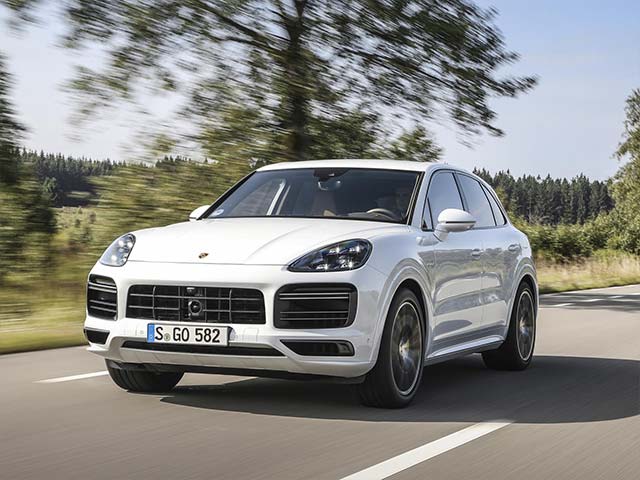 Porsche continues to consistently focus on e-mobility, with the Cayenne range following the Panamera series in now featuring a plug-in hybrid as its new flagship model. The Cayenne Turbo S E-Hybrid and the Cayenne Turbo S E-Hybrid Coupé draw their system output of 500 kW (670 HP) from the intelligent interaction of a four-litre V8 engine (404 kW/541 HP) and an electric motor integrated into the eight-speed Tiptronic S transmission (100 kW/134 HP).

Both new models will arrive as part of the 2020 model year. A third new model also debuts today: the 2020 Porsche Cayenne E-Hybrid Coupe.

All three models bear distinctive Acid Green coloring around their badges, and on their brake calipers. The Sport Chrono Package, which includes a mode switch featuring the Sport Response button, is also standard on all three vehicles. In the case of the Cayenne Turbo S E-Hybrid, the same active roof spoiler found on the Cayenne Turbo is able to make aerodynamic adjustments with five different positions depending on a variety of factors including speed and drive mode. The Cayenne Turbo S E-Hybrid Coupe and Cayenne E-Hybrid Coupe also share the same design as other Cayenne Coupe derivative models. A roofline that is 0.78 inches (20 millimeters) lower and an increase in rear track width of 0.70 inches (18 millimeters) create a more muscular appearance and stance.

For all Cayenne Coupe models, Porsche combined a fixed spoiler above the rear window with a new adaptive rear spoiler below it. The adaptive spoiler extends by 5.3 inches (135 mm) at speeds of 56 mph (90 km/h) and up to enhance aerodynamic stability.

A 4.0-liter twin-turbo V8 engine making 541 horsepower (404 kW) combined with a 134-horsepower (100 kW) electric motor generate a total system output of 670 horsepower (550 kW) and 663 lb-ft of torque (900 Nm). The electric motor sits between the gasoline engine and the eight-speed Tiptronic S automatic transmission, allowing the respective power sources to propel the vehicle in combination or independently, depending on the selected drive mode. Porsche Traction Management (PTM) all-wheel drive is standard equipment on all Cayenne models including the newly announced versions. The electric motor is connected to a 14.1 kWh lithium ion battery offering 30 percent more energy capacity than the battery used in previous generation plug-in hybrid Cayenne models. The same battery is used in other current plug-in hybrid Cayenne models.

In E-Power driving mode, the electric motor can, on its own, propel the vehicle up to a maximum speed of 84mph (135 km/h). It can also be used in the other modes for an additional power boost. These modes can be selected via the standard Sport Chrono Package (Hybrid Auto, Sport and Sport Plus). Porsche has taken this boost strategy from the 918 Spyder super sports car.

As the top models, these two vehicles come with improved standard equipment as compared to the Cayenne Turbo and Cayenne Turbo Coupe. Of particular significance, Porsche Ceramic Composite Brakes (PCCB), Porsche Dynamic Chassis Control (PDCC), Porsche Torque Vectoring Plus (PTV+) and Sport Chrono Package are all included from the factory as standard. A 7.2 kW onboard charger and 21-inch AeroDesign Wheels including wheel arch extensions in exterior color are also standard equipment on the top two models. Sport Exhaust and Rear Axle Steering are both available as options. The upgraded charger enables a complete recharge of the 14.1 kWh battery in as little as 2.4 hours when using a 240-volt connection with a 50-amp circuit. All of these features except PTV+ are optionally available on the V6-powered Cayenne E-Hybrid Coupe.

Both models include 18-way Adaptive Sport Seats as standard equipment. The seating layout for the standard body style includes a rear bench seat with three seating positions. By contrast, the Cayenne Turbo S E-Hybrid Coupe and Cayenne E-Hybrid Coupe feature two seating positions with separated individual bucket seats. For those customers who wish to take advantage of three rear seating positions, the rear bench seat design from the standard body is available to customers as a no-cost option. The rear seats in the coupe also sit lower to offset the Coupe roofline, which is 0.78 inches (20 millimeters) lower than the standard model.

The same Lightweight Sport Package versions associated with the other Cayenne Coupe models are also available to the Cayenne Turbo S E-Hybrid Coupe and Cayenne E-Hybrid Coupe. This package, which is currently available in two forms, adds a wide range of exterior and interior equipment. The changes include a carbon fiber roof, 22-inch GT Design Wheels, the Sport Design Package, the Carbon Interior Package, a Heated Multifunction Sport Steering Wheel in Alcantara, an Alcantara roof liner, black and silver Houndstooth seat centers and various exterior body parts in carbon fiber. Depending on the selected version, the Lightweight Sport Package saves up to 48 lbs.

All Cayenne models include full connectivity as standard. This enables online navigation with real-time traffic information, smart online voice control, and extensive Porsche Connect services – including searching for public charging stations. Additional options for all Cayenne derivatives when the new model year starts include wireless Apple CarPlay®, new USB-C ports and a smartphone storage tray with inductive charging function. All hybrid models from Porsche have auxiliary air conditioning as standard. This can be remote-controlled directly via the PCM and via the Porsche Connect app, and enables the vehicle to be heated and cooled even when the ignition is not switched on.

A double debut: Cayenne Coupé as a V6 and V8 hybrid

With the Cayenne Coupé, Porsche has added an even sportier variant to its successful SUV line-up. Highlights of the coupé include sharper lines with a unique roof and rear section, an adaptive rear spoiler, a rear seat bench with the characteristics of two individual seats, and two different roof designs: a panoramic fixed glass roof as standard and an optional carbon roof. Like the SUV, the SUV coupé is now available in two different hybrid versions: in combination with the 4.0-litre V8 biturbo engine and with a 3.0-litre V6 turbo engine. The new Cayenne E-Hybrid Coupé has a system output of 340 kW (455 HP) and a system torque of 700 Nm and electric range of up to 27 miles (43 km). In conjunction with the standard Sport Chrono Package, it sprints from a standing start to 62 mph (100 km/h) in 5.1 seconds (5.0 seconds with the lightweight sports packages) and has a top speed of 157 mph (253 km/h). The average consumption according to the New European Driving Cycle (NEDC) is 3.2–3.1 l/100 km (fuel) and 18.7 – 17.7 kWh/100 km (electric).