Volkswagen Takes Over Leading Position For Electromobility In China 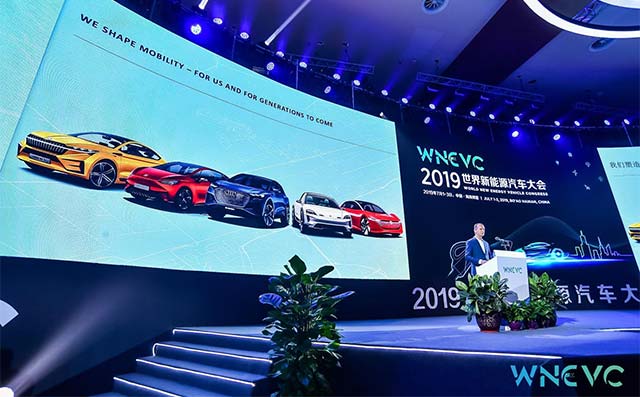 Volkswagen is striving for the lead in transforming the auto industry towards electric mobility in China. This was endorsed by the CEO of Volkswagen AG, Dr. Herbert Diess, at the first World New Energy Vehicle Congress (WNEVC) in the southern Chinese city of Boao.

The Boao Consensus, which describes the strategic results of the congress, foresees e-cars accounting for 50% of annual global car sales by 2035. Within the Chinese market, Volkswagen commits to that goal as well, making China pivotal for Volkswagen Group’s decarbonization strategy.

Volkswagen intends to offer 14 electrified models to Chinese customers this year. By 2028, more than half of the Group’s planned 22 million electric cars will be produced in China. At the same time, Volkswagen is strengthening its local R&D. More than 4,500 engineers work on future technologies in the country.

At the congress, Herbert Diess emphasised the important role of the automotive industry on the way to fulfilling the Paris Climate Agreement: “China also relies on emission-free mobility under its clear commitment to the goals of Paris. In this transformation, we are playing a key role in providing a comprehensive range of e-vehicles and strengthening the private charging infrastructure. ”

In his speech, Diess also underlined that a predictable and reliable legal and regulatory framework was necessary for the further development of electro mobility. He expressly welcomed another opening-up of the country.

E-mobility is already booming in China. Last year, more than one million plug-in hybrids and purely battery-powered vehicles were sold. This makes China the world’s largest market for e-cars. The government is supporting e-mobility through comprehensive initiatives such as the expansion of the charging infrastructure and low electricity costs. In addition, more renewable energy is being harnessed to generate electricity.

As part of its e-mobility offensive, the Volkswagen Group plans to produce around 11.6 million e- cars in China by 2028: that is more than half of the Group’s global total target of 22 million. All three joint ventures – FAW-Volkswagen, SAIC VOLKSWAGEN and JAC Volkswagen – will contribute to this. As soon as the SAIC VOLKSWAGEN plant in Anting and FAW-Volkswagen plant in Foshan start producing MEB-based vehicles next year, the production capacity alone will be around 600,000 purely electric vehicles per year. In addition, JAC and SEAT are developing their own platform for smaller e-cars. Next year, around 400,000 electrified models from Volkswagen Group China will be delivered to Chinese customers. Thus, Volkswagen Group China will meet all regulatory requirements: the fleet consumption target of five liters in 2020 as well as the reqsuirements of the credit system for the share of electric vehicles in total production.

The ecological footprint is to be further improved in all 33 Chinese production facilities of Volkswagen and its partners. In the past year alone, the CO2 emissions of the Chinese plants were reduced by 13 percent, saving 390,000 tons of CO2.

With a new joint venture, Volkswagen is aiming to improve the charging infrastructure. As a result, Chinese customers should be able to recharge their e-vehicle with even more flexibility and convenience – at home and on the move. As part of the cooperation between Star Charge, FAW and JAC, private wallboxes will be available from the end of this year and a large number of publicly available charging stations will be set up. The driver can quickly and easily find the right charging station, as users and charging stations are connected. This integrated connectivity solution is offered by Mobility Asia, a subsidiary of Volkswagen Group China that creates a digital ecosystem for all mobility applications.

Jul 3, 2019Blagojce Krivevski
Honda e: the perfect balance of efficiency and performance for urban commutingEVBox and Smappee sign agreement to bring EV smart charging to the next level