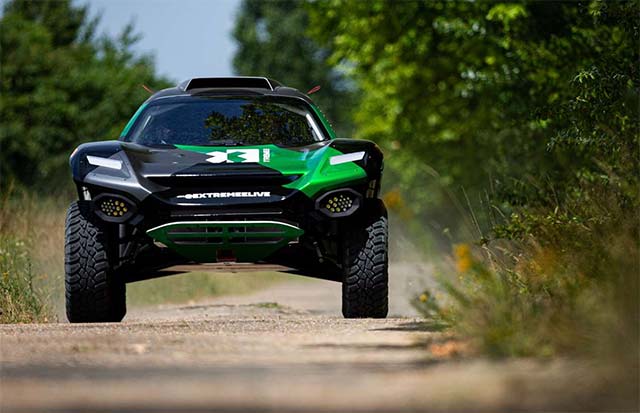 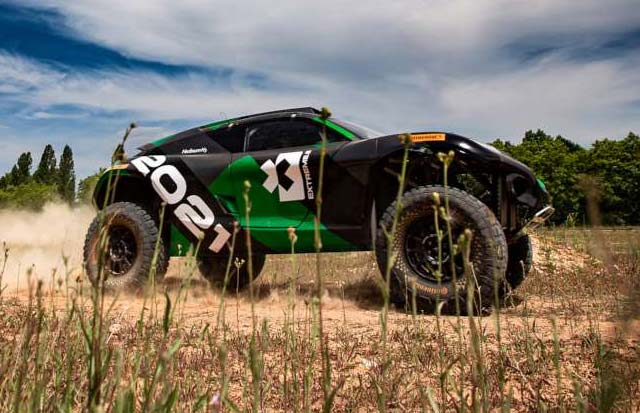 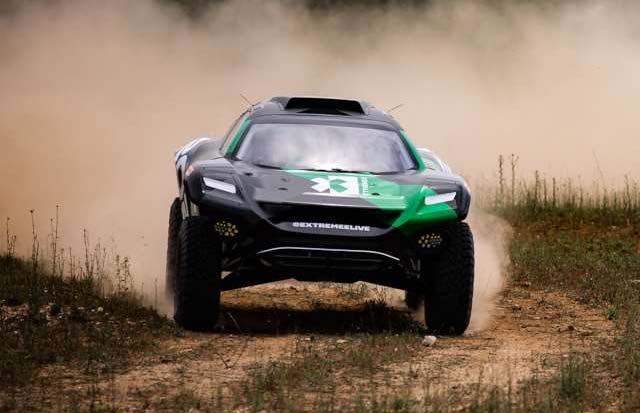 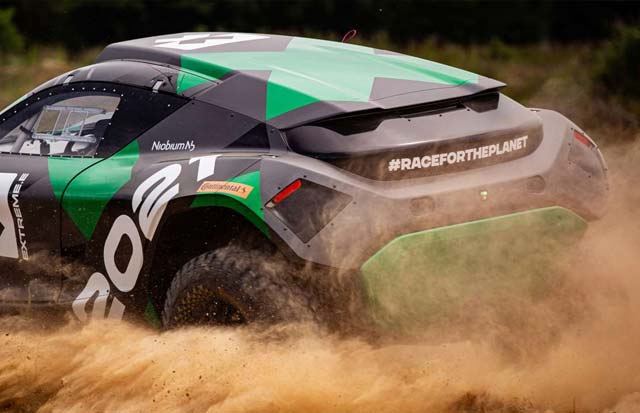 The Extreme E electric off-road SUV prototype has been revealed at the Goodwood Festival of Speed by series founder Alejandro Agag and chairman Gil de Ferran.

A futuristic looking chassis, raised suspension and massive off-road wheels and continental tyres, the ODYSSEY 21 is a burly package of fun. It wouldn’t look out of place in the Xbox game HALO. Everyone here has a smile on their face, and that’s just looking at it. Driving the thing in extreme landscapes will surely cause all sorts of pleasure-induced trouble.

The ODYSSEY 21 has been built by French company Spark Racing Technology with a battery produced by Williams Advanced Engineering. The Extreme E off-roader encompasses a niobium-reinforced steel alloy tubular frame, as well as crash structure and roll cage, whilst tyres – for both extreme winter and summer requirements – will be supplied by founding partner Continental Tyres.

The first Extreme E season is set to get underway in January 2021, with a first championship taking in events in the Arctic, the Himalayas, the Sahara desert, the Amazon rain forest and an island in the Indian Ocean.

Testing of the ODYSSEY 21 will begin in September, with the 12 cars that will enter the first season being delivered by Spark in March 2020, with group testing following later next year.

The Extreme E is a radical new racing series, which will see electric SUVs competing in extreme environments around the world. All of which have been damaged or affected by climate and environmental issues. The five-race global series – operated in associated with Forumla E – hopes to highlight the impact of climate change and human interference in some of the world’s most fragile ecosystems whilst promoting the adoption of electric technology for the good of the planet.

Alejandro Agag, Founder and CEO of Formula E shared his excitement by saying, “The Extreme E-SUV ODYSSEY 21 is unlike anything else in motorsport. The cutting-edge technology our industry-leading partners have employed in its design and construction has resulted in a stunning car, capable of the highest performance in the toughest and most varied environments on the planet. Extreme E’s combination of top-level sporting competition and ultra-demanding environments will also prove to be a significant research and development platform for manufacturers, driving further advancements in sustainable mobility.”

“Whether it’s in the Arctic, Himalayas, Amazon, Sahara or on Indian Ocean Islands, this car will showcase the ability of E-SUVs, not only to motorsports enthusiasts, but also to consumers who are looking to make their own difference to the planet by choosing an electric SUV.”