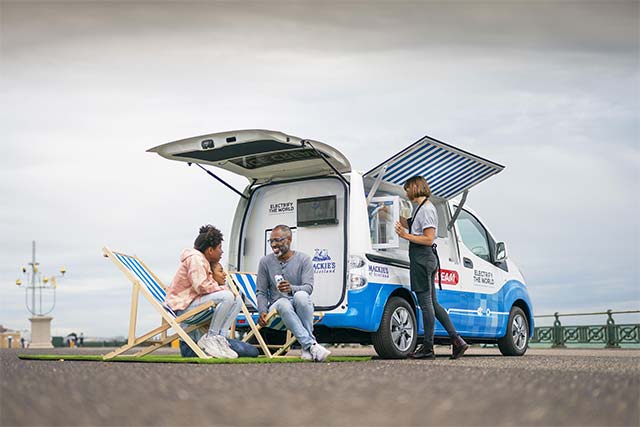 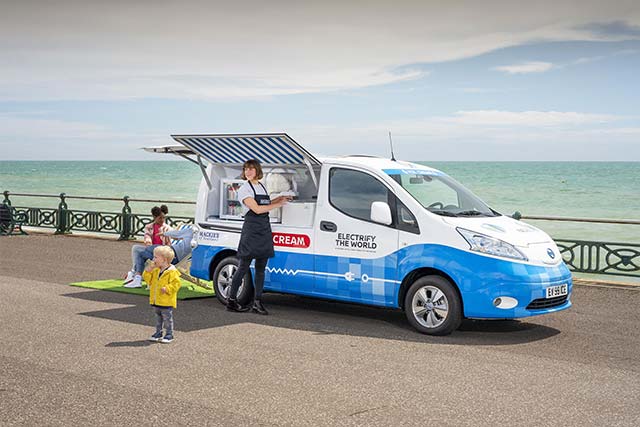 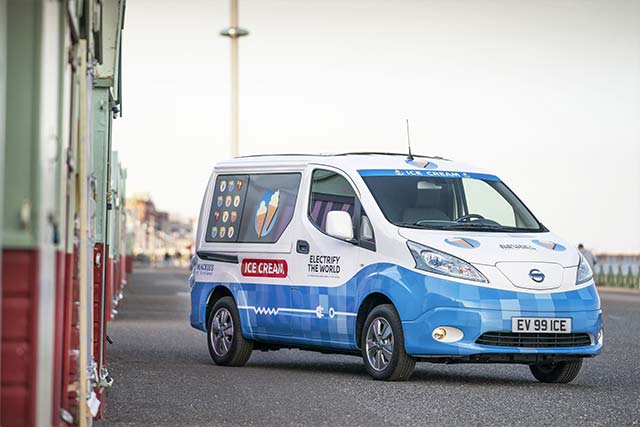 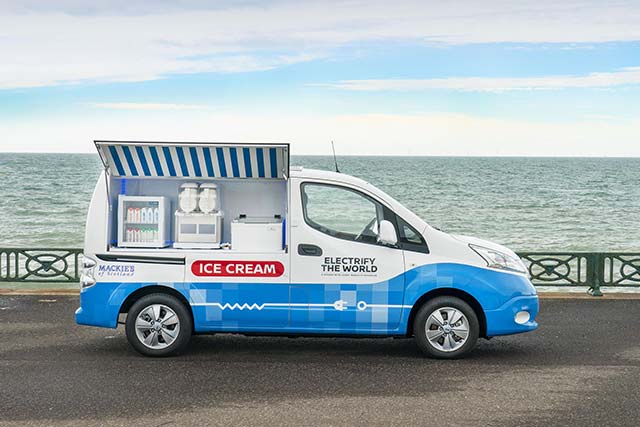 Nissan has taken the ICE (internal combustion engine) out of the ice cream van, creating an all-electric, zero-emission concept for ‘Clean Air Day’ in the UK on June 20th.

Nissan partnered with Mackie’s of Scotland, an ice cream producer powering its family-owned dairy farm by renewable wind and solar energy. The project demonstrates how a ‘Sky to Scoop’ approach can remove carbon dependence at every stage of the ice cream journey.

Most ice cream vans, particularly older models, have diesel engines which are kept running to operate the refrigeration equipment. These motors are criticised for producing harmful emissions, including black carbon, when left idling. Some UK towns and cities are now looking to ban or fine these vehicles. Nissan’s concept presents a potential solution for vendors looking to reduce their carbon footprint, and offer customers a better experience.

The prototype van is based on the e-NV200, Nissan’s 100% electric LCV (light commercial vehicle). The concept is a working demonstration of Nissan’s Electric Ecosystem, combining a zero-emission drivetrain, second-life battery storage and renewable solar energy generation.

Whilst the van’s motor is driven by a 40kWh battery, the on-board ice cream equipment, including a soft-serve machine, freezer drawer and drinks fridge, are powered by the newly unveiled Nissan Energy ROAM, which goes on sale later in 2019.

Designed for both professional and leisure applications, ROAM is a portable power pack that uses lithium-ion cells recovered from early first-generation Nissan electric vehicles (produced from 2010 onwards). This provides a sustainable second-life for Nissan EV batteries.

Nissan e-NV200 Ice Cream Van: Detail
The e-NV200 has an all-electric driving range of up to 124-miles (WLTP Combined) between charges. The two Nissan Energy ROAM units have a combined storage capacity of 1.4kWh and can each output power at up to 1kW. They can be recharged either from a 230v mains supply (a full recharge takes about an hour), or the solar panel array on the van’s roof (a full recharge in 2-4 hours).

The concept takes a number of new approaches to the ice cream van. Ice cream is served from a hatch that opens in the side of the vehicle, with the vendor dispensing ice cream standing next to the van – a customer-facing experience instead of being separated by an elevated counter.

Payment can be by cash, but also contactless bank card and smartphones via a ‘tap-to-pay’ panel mounted on the side of the van.

Instead of a jingle to attract customers – not always popular with parents – the concept has a smart button that generates a tweet of the van’s precise location using the global addressing service What3Words. What3Words divides the world into 3m x 3m locations, each with a unique three word address, e.g. ///trendy.angel.define is a spot on Brighton & Hove’s seafront in the UK. Customers can easily find the van in a park or seafront location where normal street addressing would not apply.

Thanks to the e-NV200’s bi-directional charging capability, owners could even income through the winter – when the van is less frequently used. Through a V2G (Vehicle-to-Grid) charger, the e-NV200’s battery can be used to store surplus energy from the national grid (for example renewable wind and solar energy), and then provide it back to the grid when needed. This technology can help balance out the peaks in national energy demands, as well as providing EV owners with additional revenue from their vehicle when it’s not being driven.