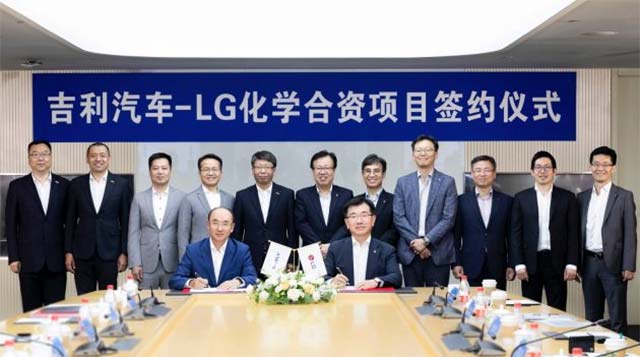 Under the terms of a new joint venture agreement, LG Chem and Geely will establish a joint venture company with a 50:50 share structure that will be jointly engaged in the production and sales of new energy vehicle batteries. Total registered capital in the new joint venture will reach 188 million USD split equally between both parties.

In November 2015, Geely Auto was one of the world’s first automotive brands to commit to electrifying its product range. Under the Blue Geely Initiative, Geely Auto aims for 90% of its sales to come from electrified vehicles – including mild hybrids, plug-in hybrids and pure electric vehicles – starting from 2020.

The joint venture with LG Chem will help Geely to realise its Blue Geely Initiative with a stable supply of core components for Geely Auto, to be used in future products to meet Chinese consumer demand for new energy vehicles.

The Chinese new energy vehicle market reached 1.25 million units in 2018, accounting for 62% of total global electric vehicle sales, with strong growth predicted for the overall market in coming years. In May 2019, Geely Auto sold more than 10,115 electrified vehicles, representing a 25% increase in sales over the same period a year earlier. In the first five months of 2019 Geely Auto sold a total of 41,615 pure electric and electrified vehicles.

Geely launched the Geometry brand in April 2019 as a pure electric brand within Geely Auto, and has secured strong sales for its first model: Geometry A. Within the next two years Geely Auto plans to launch more than 30 electrified vehicles including hybrid and pure electric vehicles.

Further details on the new joint venture will be announced in due course.