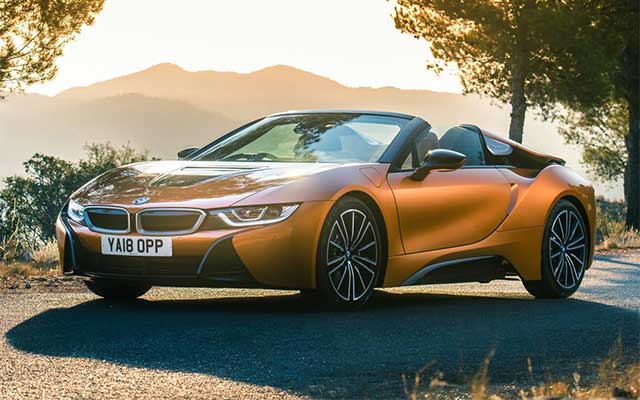 It’s time for the all-new the BMW i8 Roadster to be reviewed by the Fully Charged’s presenter Jonny Smith.

The BMW i8 has been a technological pioneer and the world’s best-selling plug-in hybrid sports car since it arrived in 2014. Now in it is joined by a new model that adds further allure to the arena of sustainable driving pleasure.

Priced from £124,735 OTR, the all-new BMW i8 Roadster takes the combination of emissions-free and high-perfromance motoring and adds open-top thrills.

Few cars of any price or propulsion can claim to make a bigger visual or technological impact than BMW’s i8. Now with the roof removed you lose the rear seats but gain even more futuristic looks, together with potential facial sunburn. It may not be pure EV, but there is no doubting the influence, the technical prowess and positive attitude BMW’s flagship i vehicle brings to the plug-in party. Grabbing people’s attention to appreciate a carbon fibre small engined plug-in sports car that looks way more expensive than its price tag is no bad thing.

All-electric operation ensures the roof opens or closes in an almost silent hush, within 15 seconds and while travelling at up to 31mph. This makes the i8 Roadster the BMW with the fastest opening roof across all the company’s models.

The new BMW i8 Roadster is powered by a hybrid synchronous electric motor and a three-cylinder petrol engine with BMW TwinPower Turbo technology. The engine’s power is fed to the rear wheels through a six-speed Steptronic transmission, while the electric motor propels the front wheels via a two-speed automatic gearbox. The end result is a hybrid-specific all-wheel-drive system that glues the car to the road.

Underpinning its improved emission-free range is an updated version of the i8’s lithium-ion battery. The high-voltage unit is located centrally under the car, and its cell capacity is increased from 20 to 34Ah. All of which means the motor has more energy at its disposal. Plus, the cell configuration allows a 12hp increase in peak output to 143hp. And in typical electric motor fashion it generates its maximum torque from rest which means it is ideally equipped to deliver razor sharp responses from the slightest movement of the accelerator.

The improved technology means the i8 Roadster can cover up to 33 miles with zero emissions, broadening the reach of all-electric mobility well beyond the city limits.

The battery cells’ higher capacity means that the proportion of all-electric driving can be increased substantially, even in hybrid mode. With the default driving mode engaged, the BMW i8 Roadster is capable of pulling away and reaching speeds of up to 65mph purely on the electric motor’s power, making it possible to drive with zero emissions not just in town, but on country roads as well. If the eDrive button is pressed, the all-electric threshold is increased further to 75mph.

The i8’s combustion engine has also undergone further improvements. The turbocharged three-cylinder unit featuring direct injection and VALVETRONIC variable valve timing extracts a maximum output of 231hp from its displacement of just 1.5-litres, plus peak torque of 320Nm. It is pleasantly refined and generates a distinctive soundtrack that now has an even sportier note when its power reserves are called upon. The engine also runs more cleanly, as it now comes equipped with a particulate filter as standard that effectively absorbs all the particulate matter contained in the exhaust gases.

The system output produced by the electric motor and engine acting in unison has increased to 374hp. The new i8 Roadster takes 4.6 seconds and has an electronically limited top speed of 155mph.

Combined fuel consumption, as calculated in the EU test cycle for plug-in hybrid vehicles, stands at 141.2mpg– which equates to petrol CO2 emissions of 46g/km– plus 14.5kWh of electricity In everyday driving, the i8 Roadster returns fuel consumption and emissions figures that undercut those for conventionally powered sports cars with similar outputs by around 50 per cent. A typical commute through city traffic and along country roads can be negotiated with fuel consumption of over 56mpg. On long-distance journeys with prolonged sections of country and motorway driving, the intelligent energy management ensures that average economy betters 40mpg.

May 8, 2019Blagojce Krivevski
Name of Honda’s urban electric car confirmed: ‘Honda e’Road To Zero: Plug-In Hybrids Could Take Us Half Way There