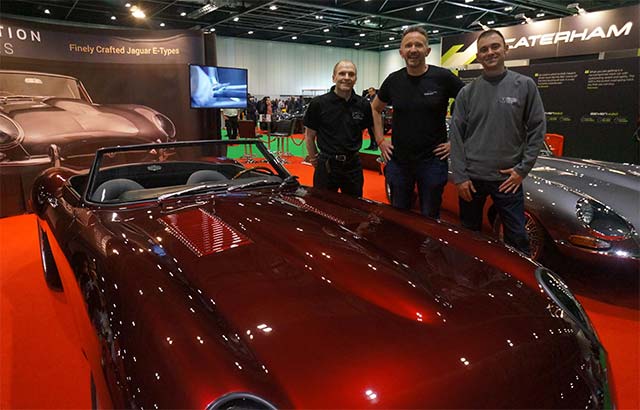 Evolution and Electrifi have announced a new partnership which is set to result in the launch of an all-electric hand-built classic Jaguar E-Type in the coming months.

Evolution offer a range of highly developed classic Jaguar E-types, steel or aluminium, in a variety of body shapes, engines and build spec, all hand-built to the finest quality, redeveloped and re-engineered to be safer, more refined, optimised as a grand tourer and reliable – and as of today will now be offering a viable carbon zero model for the future.

Electrifi have been taking the most desirable classics and converting them into electric drive by hand building them from the ground up to make them more powerful and safer zero carbon cars for the future.

The Evolution Electrifi Jaguar E-type will initially be available as an aluminium bodied roadster with hood and hardtop, with a fixed head coupe to follow, both with the same refinements which make Evolution models so unique such as; Electric Power Assisted Steering; electric air conditioning; high power vented disc brakes; enhanced and optimised steering and suspension. The overall weight of the car will remain the same, with the power output restricted to 450bhp with a 0-60 mph time of less than 4.0 seconds and a top speed of 165 mph.

The electric conversion will be based on an original 60s identity Jaguar E-Type and come with original engine / gearbox. Although the chassis and monocoque structure will be subtly and carefully strengthened to handle the extra torque from the electric powerplant, it will still retain the all-important DNA of the original bodyshell, such that the whole process is fully reversible without modification, should the customer want to install the old engine.

The price of the Evolution Electrifi Jaguar E-Type is forecast to be in the region of £850,000.00 and the car will be available to purchase from either Evolution or Electrifi with models available from the beginning of 2020.

Uryk Dmyterko of Evolution was on the stand at the London Motorshow today and commented “We are looking to the future, and we recognise that electric is the way forward. Our partnership with Electrifi means we can concentrate on building the best Jaguar E-type available and utilise Electrifi’s already highly developed and tested electric technology.”

Commenting on the partnership, Norman Crowley, the brainchild behind Electrifi said, “With this partnership we are helping breath life back into these classic cars by building modern and sustainable technology into the very heart of cars for the twenty first century. Working with Evolution to build the Jaguar E-type brings us a step closer to changing the way people drive in the future.”

A prototype model is due to be unveiled at the end of the summer and from this subsequent electric models will be available from the end of 2019.