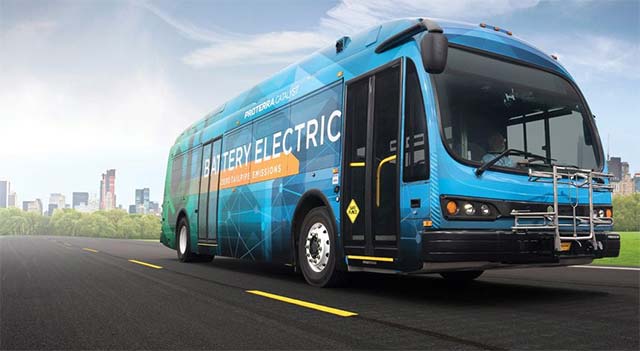 The University of Georgia has placed an order for twenty 40′ Catalyst® E2 buses with DuoPower drivetrain technology and fourteen 125 kW Proterra PCS chargers.

With the deployment of 20 Catalyst electric buses, the University of Georgia will have one of the largest fleets of electric buses in the U.S., and will displace more than 2,500,000 gallons of diesel over the vehicles’ 12-year lifespan and eliminate over 4,500,000 pounds of carbon emissions annually.

All of the University of Georgia’s Catalyst E2 buses will be powered by the Proterra DuoPower drivetrain, which delivers twice the horsepower and five times the efficiency of a standard diesel engine. The DuoPower drivetrain features two electric motors that deliver an impressive 510 horsepower, accelerating a Catalyst bus from 0-20 mph in about five seconds, while also achieving an industry-leading 24.6 MPGe. In addition, the DuoPower drivetrain can propel a bus up a 26 percent grade, making it an ideal option for routes with steep hills. By combining the DuoPower drivetrain with Proterra’s market-leading battery technology and lightweight composite bus body, the Catalyst vehicle provides unparalleled performance.

With this order, the University of Georgia joins colleges and universities nationwide that are moving to battery-electric campus buses. Proterra has sold its Catalyst buses to StarMetro/Florida State University, University of Montana, Duke University and Alabama A&M University.

“Colleges and universities across the country are experiencing the financial and environmental benefits of deploying electric buses, which offer a smart solution for clean and quiet campus transportation,” said Proterra CEO Ryan Popple. “By deploying zero-emission buses, the University of Georgia will make a big impact in reaching its sustainability goals, reducing their carbon footprint and increasing alternative transportation on campus.”