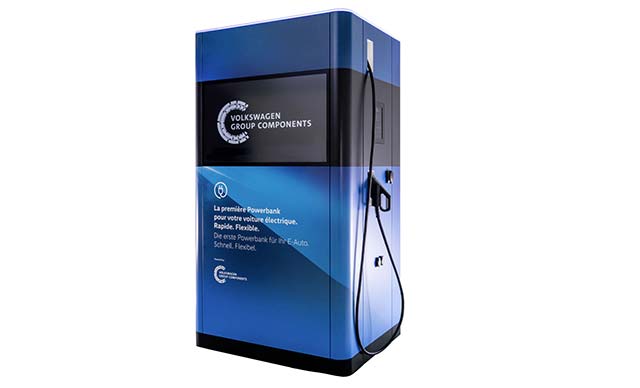 The Volkswagen Group Components brand is showcasing the near-series design study of its flexible quick charging station at the Geneva Motor Show.

With compact dimensions, it can be installed wherever there is demand or where there is still no charging infrastructure. Connected to the grid or even off-grid – the station can charge up to four electric cars simultaneously, based on the principle of a ‘power bank’, two with DC quick charging.

The charging station can also be used as interim storage for eco-power, enabling CO2-neutral mobility, however when connected to the mains power grid, it becomes a permanent charging point. Series production will start from 2020 onwards in Germany at the company’s Hanover site.

Power bank for electric vehicles
The flexible quick charging station works on the principle of a ‘power bank’, as used by millions of travellers for their smartphones – just considerably bigger and more powerful. It has a charging capacity of up to 360 kWh.

The batteries of electric vehicles will be charged in next to no time, thanks to DC quick charging technology with a charging capacity of 100 kW. When the energy content of the battery built into the charging station falls below a defined value, the depleted charging station is simply replaced by a charged one. By contrast, when it is permanently connected to the mains power grid, the battery pack continuously and independently recharges itself.

Charging whenever, wherever
The near-series design study shows the compact dimensions of the charging station: with a footprint of only 120×100 cm, it can be positioned almost anywhere, a factor that will enable vehicles to be charged at almost any site in future – in the city, at festivals, at a stadium or at any other events wherever they may be.

Charging station: a building block in the energy revolution
If the station is charged with renewably generated electricity – whether solar or wind energy – the new charging station allows renewable power to be temporarily stored for the first time, making electric mobility CO2-neutral. Countries that feed a high proportion of renewably generated power into the grid, in particular, will for the first time be able to store a percentage of this energy using this charging station. At the same time, the interim storage of energy relieves pressure on the mains power grid at peak times.

Second life for electric car batteries
Technically, the charging station is based on the Volkswagen Group’s Modular Electric Drive Matrix (MEB) and is designed to use its cell modules. Apart from the benefit of being scaled up to different capacity levels, the charging station will provide a second life for batteries from electric vehicles. After all, batteries are replaced when they lose their capacity to hold a charge over time and fall below a defined reduced residual capacity. If they then pass a detailed analysis, they can be recycled in a flexible quick charging station and thus reused, reducing the use of valuable raw materials in the long term.