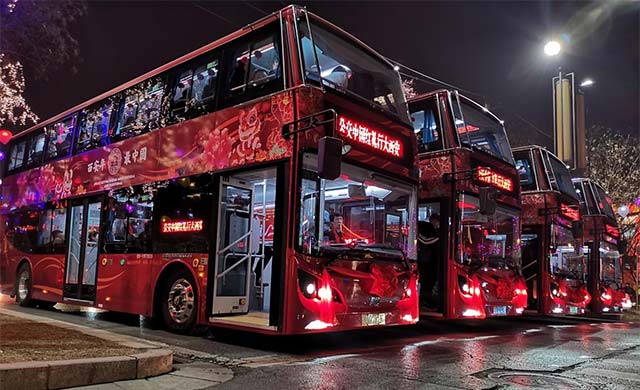 BYD has launched the world’s largest pure electric double-decker bus fleet in northwest China’s city of Xi’an. The fleet of 200 K8S double-deckers will provide citizens of this ancient city with more environmentally friendly travel and help Xi’an, a key hub of China’s “Belt & Road Initiative”, showcase its unique blend of ancient and modern.

The fleet will be put into operation on six lines in the city around the Chinese Spring Festival, among which 100 have begun running on Lines 284, 608 and 609 on January 30, and the remaining 100 buses will service Lines 19, 25 and 603 after the festival.

The buses offer a broad field of vision, using low floors with single-step access as well as front and rear swinging doors. The lower deck is more than 1.9m high, providing ample space for standing, while the upper deck is over 1.7 meters in height, making walking comfortable and convenient. In addition, they come fitted with a wheelchair area and boarding/debarkation ramps, offering maximum accessibility to passengers with all kinds of needs.

Xi’an is vigorously developing green and low-carbon mobility and accelerating the electrification of public transport. After launching 1,100 BYD pure electric buses onto the city streets in late 2016, Xi’an put another 1,900 into use in 2018. More than 3,000 BYD pure electric buses are now operating in the city, giving it the biggest pure electric bus fleet in northwest China. Xi’an is now entering a golden age characterized by numerous strategic opportunities along the “Belt and Road”, and the appearance of this first batch of BYD pure electric double-decker buses is significant for this thousand-year-old city, providing a positive example for the electrification of public transit in northwest China and the rest of the country.

K8S double-decker buses have been put into operation in the cities of Shenzhen, Guilin, Huai’an, Jingdezhen and Pingtan, operating on a number of green scenic routes, recreational routes, cultural routes and shopping mall lines.

Overseas, BYD pure electric double-decker buses have been operating in London since October 2015, and BYD and local operator Alexander Dennis in July 2018 won the bid to supply thirty-seven BYD ADL Enviro400EV buses, which will enter service with Transport for London (TfL) operator Metroline in the second quarter of 2019.