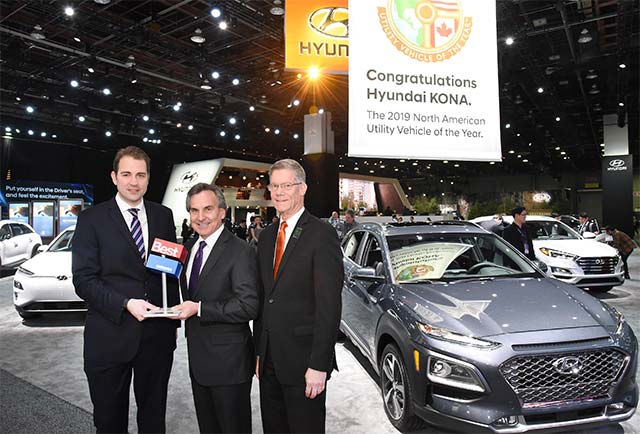 Car and Driver named the 2019 Hyundai Kona and Kona Electric CUV models the Best Subcompact SUV as part of its 2019 10Best Trucks and SUVs awards in events surrounding the North American International Auto Show in Detroit.

The award marks the first time that a Hyundai CUV model has been named to Car and Driver‘s 10Best Trucks and SUVs list.

“We are thrilled the editors of Car and Driver recognized the Kona and Kona Electric models as CUVs worthy of their highest recommendation,” said Mike O’Brien, vice president, Product, Corporate and Digital Planning, Hyundai Motor America. “Kona is an affordable, stylish and functional compact CUV, tailored to the needs of customers who pursue active lifestyles of all kinds. Even more, Car and Driver is both highly discerning and selective, so their recognition of Kona as a 10Best winner is certainly a strong indicator of Kona product line excellence.”

Both the Kona and Kona Electric are built on all-new CUV platforms, offering versatility to consumers. Kona was developed with a focus on enhanced driving dynamics and responsive performance for a variety of urban and multi-surface driving conditions. Kona Electric’s estimated range is an impressive 258 miles and offers standard fast-charging capability, a feature for which many competitors charge extra. The Kona Electric platform has been developed to give customers CUV-like ground clearance and an elevated, command seating position to provide better visibility and comfort on long journeys, as well as easy ingress and egress.

In choosing the Kona above the rest of the subcompact field, Car and Driver said, “Inside, though, it’s conventionally attractive and comfortable, with lowest-bidder plastics—universal in this class—balanced by satisfying touch points. And like its stablemates, this Hyundai is a textbook example of functional touchscreen ergonomics, with every control exactly where you’d expect it to be.” They also noted that “In the subcompact segment, the competition sets a low bar. But where mere goodness would suffice, the Kona is excellent. It is proof that not all crossovers are equal.”