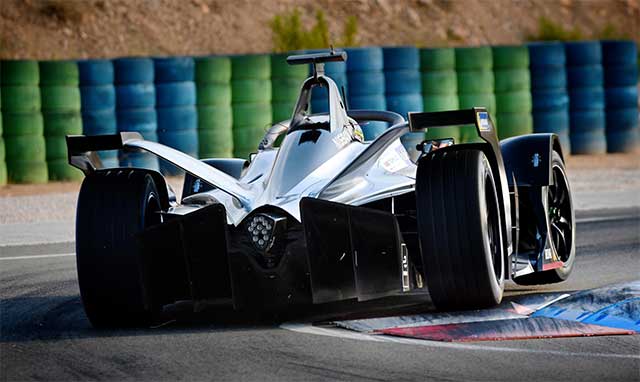 The Nissan e.dams team is set to kick off its electric street racing challenge when the ABB FIA Formula E championship begins its fifth season of competition this week.

This weekend’s race is the first of 13 to be held in a dozen major cities around the world. As the global leader in electric car sales and the first Japanese carmaker to enter Formula E, Nissan will use the championship series to showcase the performance side of Nissan Intelligent Mobility.

Nissan will compete against 10 other manufacturers/teams during season five (2018/2019), which marks major changes for Formula E. The fifth season will feature the all-new “Gen 2” Formula E cars with new chassis and batteries and spectacular new aerodynamics. The new cars have an increased range, enabling the championship series to eliminate the previous midrace car swap.

The new race format features 45-minute (plus one lap) races and an innovative “attack mode.” Drivers will be able to access an extra 25 kilowatts of power once they’ve passed through an activation zone. The zone will be clearly visible and marked out on the circuit for fans trackside and those watching on TV.

Nissan has used its years of experience developing and manufacturing the Nissan LEAF – the world’s best-selling electric car – to develop a new powertrain package for its Formula E car, including a new electric motor, inverter, gearbox and software. The brand-new electric race car capped a world tour on Dec. 2 with the first Formula E demonstration in Japan at NISMO Festival, Fuji International Speedway, following a Nov. 30 launch event in Tokyo.

“It’s taken years of planning and months of intense preparation, but we’re now ready to hit the track for our Formula E race debut,” said Michael Carcamo, Nissan’s global motorsports director. “We’ve drawn on our experience as a global leader in electric vehicles for the road to help develop our Formula E powertrain – and what we now learn on the track will go back the other way, benefiting Nissan’s electric-car customers.”

“With one car per driver for the full race, season five is opening a new chapter for the ABB FIA Formula E Championship,” said Jean-Paul Driot, Nissan e.dams team principal. “Nissan e.dams’ new partnership, new power train and new chassis brings added pressure but these challenges are intensely motivating for the team, the drivers and Nissan.”

The cars will hit the track for the first time on Dec. 14 for a shakedown practice run at 2:30pm local time. The compact Formula E race day format on Dec. 15 includes practice, qualifying and the race all held in a single day, with the green flag set to drop at 3:05pm local time.