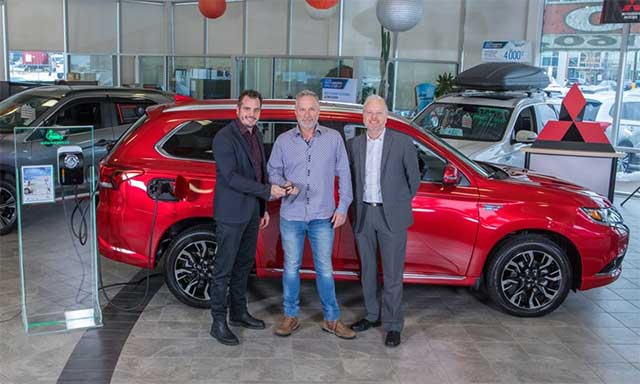 For the first time ever in Canada, a plug-in hybrid has reached 5,000 sales in the calendar year.

Recently, Outlander PHEV was awarded Green Car Journal’s 2019 Green SUV of the Year at the Los Angeles Auto Show’s AutoMobility LA. The Outlander PHEV received top honors among a list of some of the largest OEMs in the world, and was recognized for raising the bar in environmental performance at an affordable cost for consumers.

“Canadians are recognizing that the Mitsubishi Outlander PHEV is electric and much more helping to establish a new industry high water mark. We see our strongest results in Québec month-after-month. Most Outlander PHEV customers were in gas-only SUVs and cars previously. As the first affordable plug-in hybrid SUV in the market, we’re helping to significantly grow adoption to EV. We are very proud of that,” said Tony Laframboise, president and CEO, Mitsubishi Motor Sales of Canada, Inc.

Mitsubishi Motor Sales of Canada is the sales, service, parts and marketing arm for Japan’s Mitsubishi Motors. With a product range consisting of Mirage and Mirage G4, RVR compact crossover, Outlander compact sport utility and Outlander PHEV, and Eclipse Cross, MMSCAN supports its dealerships with a head office team and parts distribution centre — both located in Mississauga, Ontario. Established in 2002, MMSCAN and its dealerships employ over 1,200 people in communities large and small. In 2016, MMSCAN became the only automaker to partner with Breakfast Club of Canada with a goal of stimulating young minds and a brighter future in communities across the land.